Isabella Smythe Pace is one of my immigrant ancestors. As yet, I can't tell you exactly what generation of Grandmother she is to me. My best guess is 12th Great Grandmother. I found her through DNA. Through the YDNA tests of now 7 descendants of Rev. John Lambert, born in 1772 and died about 1860 in Stanly County, NC, we know that we are both positively descended from Rev. John Lambert and he, in a straight father to son line, was a decesdant of Richard Pace and wife Isabella Smyth of Jamestown. There are some major suspects as to the father of Rev. John, but that fact has not been nailed down yet.


Recorded in the Marriage Register of St. Dunstans Church, Stepney, County of Middlesex, page 70 is:

Wapping was a little port, a fishing village, just south of the Tower Bridge. At the time of the marriage of Richard and Isabella, it was a few miles south of London. Today, is throughly within the city limits of London. Richard, we know, was a carpenter, and a Prostestant.


I don't know what brought Richard and Isabella to Virginia, along with their young son, George, but most likely what brought any of the young adventurers to a dangerous and remote land. What we do know is that they arrived on Jamestown Island before April 1616. Isabella was a remarkable woman for her time, no doubt well-educated and very intelligent. Both she and Richard were proclaimed Ancient Planters, due to their early arrival, and both were investors in the Virginia Company.


The Paces obviously did not take to the stiff regalities and harsh punitive penalties, so they took their chances away from the safety of Jamestown and settled on a high bluff above the James River. Richard built a plantation there he named "Paces Paines" with the help of few friends and obviously, some Native American servants.

Isabella owned her own share of the property, likely due to a Petition of the First Assembly of Burgesses in 1619 that had declared shares for wives because, "in a new plantation it is not known whether man or woman be the most neccessary." Richard owned 400 acres and Isabella 200.

Richard had achieved the ownership of 100 acres from "his own personal adventure," but the other 300 was from importing 6 other citizens, at 50 acres a head (called a headright). Their names were:Lewis Bayly (Bailey), Richard Irnest (Ernest), John Skinner, Bennett Bulle, Roger Macher, and Ann Mason. On a trip back to England to find servants to help clear the land and work at Pace's Paines, Richard Pace brought with him a young woman named Ursula Clawson who was named as his 'kinswoeman".  She was among several other young women brought to be wives of the Colonists. Perhaps she was a niece or cousin.

Richard and Isabella had adopted a young Native Boy named Chanco, perhaps he was an orphan and perhaps a playmate for their son, George. Chanco obviously still had interaction and communication with his tribe, while living with the Paces, as an event is passed down to us through historty that cemented the standing of both Richard Pace and Chanco as heros of Jamestown.

The records state that Chanco was an "Indian" that Richard Pace "used as a son." Chanco warned Richard of an impending massacre in 1622. He had been asked by his tribesmen to cut the throat of Richard during that time, but Chanco, however, loved the Paces and warned them instead. It is said Richard then rowed 3 miles across the river to Jamestown, to warn them. It put Jamestown in a state of defence, they were prepared. The attack was still very deadly, 367 out of about 4000 people died on March 22, 1622, from the attack, but it would have been much more deadly had Richard Pace not warned them.

The Paces stayed in Jamestown about 4 months after that, at which time Richard petitioned the Council to "returne (to Paces Paines), with a company of Good Men to Restore" his house and farm after the raid. Richard would be killed in another Indian raid a few years later. Paces Paines is now Mount Pleasant Plantation outside of Jamestown in Virginia.


Isabella, it is written, was born in Stepney, Greater London, the daughter of a John Smythe and Ann Smith.  After the death of Richard Pace, she remarried quickly to neighbor William Perry, as was the custom, for young widows to not stay single. They lived in Pace's Paines while Isabella maintained a separate parcel of land for her son, George Pace, when he reached the age of majority.  Isabella would have a son, Henry Perry with Capt. William Perry.


ISABELLA PERRY, wife of William Perry, gent., (as her first divident),200 acres in the Corporation of James City on the south side of the main river, formerly granted to her and late husband Richard Pace, deceased, December 5, 1620. Said land adjoined westerly that of John Burrowes, now in the tenure of John Smith, and thence extending east to the land granted George Pace, "bearing date with these presents" - 100 acres due for her own personal adventure as an ancient planter, and the other 100 as the dividend of Francis Chapman (granted him December 5, 1620), and by him made over to Richard Richards and Richard Dolphenby, and by them made over to the said Isabella Perry, at a court at James City, January 20, 1621. Granted by Francis West, September 20, 1628.[4]
From Wikipedia


Captain William Perry was one of 4 people who cleared the acreage at Hog Island. He sailed back to England in 1624 to ask the Virginia Company for relief from taxes due to the losses incurred in the Indian attack of 1622. He took a native boy with him and for the funds to raise the child in the Christian faith. I wonder if this was Chanco or another boy?

Captain Perry, Isabella and the boys, George and Henry, were not in Jamestown for the February 1629 muster. On May 9, 1629, Isabella would testify in court, in London. Captain Perry, like the Paces, had preferred his own wilderness to the stiffness of Jamestown and founded an 8000 acres plantation called Buckland, in what would became Charles City.

" Isabell, wife of William Perry, Merchant of Virginia, age 40, desposes 26 August 1629 that about Christmas last one John Riley of London, merchant, died in the house of examiners husband in Virgina."


George Pace patented his fathers 400 acres on September 1, 1638. That year, he would marry Sarah Maycock, daughter of Reverend Samuel Maycock, who was killed in the 1622 Indian raid. This makes Sarah Maycock Pace one of the mothers in my family tree as well, since all of Richards descendants also descend from George.

Isabella would find herself, again, a widow.

“Here lyeth the body of CaptaineWilliam Perry who lived neireWestover in the CollonyWho departed this life the 6th day ofAugust, Anno Domini 1637”

Isabella would be widowed again and this time would marry the richest man in Jamestown, George Menifee. Menifee was an attorney who brokered in land, tobacco and people (laborers). Isabella's son Henry Perry would later marry Menifee's daughter .


George Menifee (Menifye, Menefie) was born about 1596 and was first listed in the census of the Virginia Colony in 1624.  He was married a total of 4 times and only had the one child, Elizabeth. He first married the widow of James Rolfe, Jane Pierce Rolfe and she is thought to be the mother of Elizabeth.

George loved botany and gardens, his plantation, called Littleton or Littletown was described as a place of great beauty, containing the "fruits from Holland and Roses of Provence".  George Menifee was the first person to cultivate Peaches in America. His orchard consisted of Apples, Pear, Cherry and Peach trees. He grew a variety of herbs around his house including Rosemary, Thyme and Marjoram.


After his marriage to Isabella, George would leave his homemade paradise and move to Buckland, the plantation of Captain William Perry and obviously the home of Isabella and her younger son Henry Perry. George Pace was on his own at Pace's Paines by then.

There are those who say they don't believe that Isabella remarried to George Menifee, but there are facts that corroborate it. First, why would he leave his beloved Littleton for Buckhorn if not for Isabella? He would have no right to Buckhorn, only the child, Henry Perry would, in time. 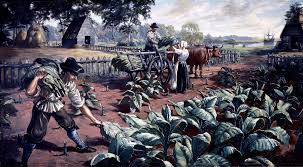 "Mr. George Menyfye, Esq. this day presented to the court an Indian boy of the counrty of Tappahannoch Christened and for the time of ten years brought up amongst the english by Captain William Perry, deceased."

Mr. George Menifye: the indian was examined and found to have been well instructed in the principles of religion, taught to read, instructed to writing: and whereas there hath formerly been given by will, a stock of three hundred pounds sterling by Nicholas Farrar, late of London, Merchant, deceased, by [for?] the Indians, whereof 24 pounds sterling was yearly to be paid to any person that should bring up three of the indian children the said Mr. Menifye for his better supportation in the education of the said indian boy desire certificate from the court of the bringing him up and instructing him in christian religion as is said: the governor and council approving and commending the care that hath been used towards this youth have condescended to the request of the said Mr. Menifye and have thought goo to recommend hereby his suit for the allowance of 8 pounds per annum, part of the said 24 pounds. towards the maintenande the said youth and to that purpose in testimony of the premises have thought good to cause the seal of the colony to be hereunto affixed.Given at James city the tenth day of June, a domini 1640.[5]
-The Virginia Magazine  of History and Biography p 282.


Isabella would not outlive her third husband. Menifee would remarry after her death to a Mary Potts and this is the wife he would mention in his will.

Isabella would be survived by the two sons, Henry Perry and George Pace.

George Pace was left to carry on Richard and Isabella's American Dream. He married Sarah Maycock, "orphan of Jamestown".  Her father was Samuel Maycock, a minister educated at Cambridge who had been sent to Jamestown by the Virginia Company in 1617 to pastor it's first church. He established a plantation, "Maycock Plantation" located 6 miles up river from Jamestown. He patented it in 1618 and was then killed in the massacre of 1622. Sarah was just an infant at the time as she is shown in the 1624 census as an infant in the home of Captain Roger Smith and was raised by the Smiths.

George and Sarah would take the Pace line into the future.