She was born into the family of a cleric and minister, Wincy Elizabeth Morton was the daughter of Samuel Parsons Morton, known in these parts as "Crying Sammy", due to his emotional delivery of sermons. Her line is very well documented, unlike that of her husband. Many of her, and therefore my, ancestors led back to Virginia and from there to Great Brittain. But she also had an Irish line, one to Belgium and several to the Swiss, German and Dutch exodus of the early 1700's to Pennsylvania and then down the Great Wagon Road to North Carolina. Wincy was a throughly European mix.

In the below portrait, she looks rather unhappy, while the happy look on her husbands face is reflected in the glass.


She was born on January 24, 1839, most likely in what is now Stanly County, North Carolina, as the 1840 census, the closest to her birth, has her father and family in Montgomery, surrounded by neighbors I know to have lived in Stanly, but it would not be Stanly for another year.

Her mother was Vashita Calloway, known as Vashti. Vashti was the daughter of old Job Calloway and Susannah Martisha Randle. She was the first wife of Crying Sammy. When she died, he married Lucy Ingram.


Wincy's first census, was in 1850, her mother had passed in 1846, and her father had already remarried Lucy Ingram. Wincy had been the 4th of 7 children to her mother and father. Lucy had added two more.

Sammy had been a Registrar and Clerk for the town of Albemarle, all the while preaching at various churches within the Circuit. He had began at Ebenezer, in present day Badin, appeared at Kendall Valley and made a temporary home at Rocky River Church in Anson, just after Wincy was born.

The 1850 census shows that Wincy was a student, so she no doubt attended school, perhaps even the girls school in Ansonville. She was fairly well educated for the day.

Wincy would marry George Washington Turner on July 16, 1854, when she was just 15 years old. He was a handsome and devoutly Christian man, but not one of means or community standing. In fact, he had been raised a fatherless child, gifted land by his maternal grandfather upon the death of his mother. I believe Wincy fell for his kind face and twinkling blue eyes, while her father approved of his humility and dedication to the church and faithfulness to the Lord.

Wincy and George's first child, a son, would arrive 2 years later when she was 17, on April 6, 1856. She named him George Samuel Turner, for his father and her father. George Samuel would be quickly followed by a series of 5 sons.

The second, James Stevens or Stevenson, born in 1858, seems to have been named for Wincy's paternal grandfather and her oldest brother, Steven Ferninand Morton. The third son, Robert Johnson Turner, came about 18 months later, and I believe was named for a traveling evangelist. I've studied the family naming patterns closely, due to the fact of not knowing who George W. Turner's father was.

When you combine the fact that certain 19th century census takers had difficult to read penmanship, in conjunction with modern transcriptionists who did not live in the area and were unfamialiar with the area and the familly names common therein, you get room for a lot of human error. True, some families were just skipped over in the census. Others, as in the example below, were just mislabeled.


This is why it's important to research the entire family, as best as you can, while climbing your family tree. When James Turner was making his will, his youngest two daughters were still single, Mary and Martha. He wanted to make sure they had property and means to sustain themselves after his deceased and this desire included his beloved grandson, Washington, who was 16 at the time. While Mary was tainted (by attitudes of the times), by an illegitimate birth, Martha was not. The Drew family was one tied to the Turner family before their arrival in Anson. Reddick Drew had been made a widower just before the death of James Turner. When Mary and Martha Turner came in possession of property, Reddick saw an opportunity and married Martha. The property of Mary and Martha connected, side by side.

Reddick Drew, despite having at least 3, and I believe possibly 4 or 5, wives in his lifetime, never had any children. As such, he took in numerous orphans, such as the Axom children shown in his household in 1860. The Mary as his wife was a census  error, this had to be Martha. The young girl, Ruth Shepherd, living with Reddick as a housekeeper, was not an orphan. She was from a neighboring family.

The census taker must have been tired and knowing the two families were related, just dashed on down. The problem with that was, Washington was not a Shepherd, but a Turner. So you have G. W. and Wincy with their first 3 sons, living with his mother, Mary and next to his Aunt Martha and Uncle Reddick Drew.

In the next decade, the Turner family would grow considerably.  George Washington Turner became a deacon and dedicately involved in the founding of Red Hill Baptist Church. I've been privy to the exact location of his farm and it bounded and was within view of, the church, which sat on a small hill above it. It also adjoined the property of the Martin family. He had served in the Civil War, a Confederate, of course, given his location, and lived to tell the tale.

G. W. and Wincy had many strong sons to help with the farm. In time, the number of children would grow to 13. Robert Johnson would be followed by Joseph Atlas and finally, Wincy would get a daughter, Mary Elizabeth. She would be known as Betty and would marry Benjamin Franklin Threadgill.


The infant William is where I come in. He was my Great Great Grandfather.  Oddly, Mary Turner, George's mother, was not living with them in 1870, but was on her own. She appears in the census, but by 1880, she was living with them again. Mary would die in 1881. She is probably buried at Red Hill, but her marker is no more. The census shows her as a widow, but she never married. The family Bible states that Mary Turner died May 21, 1881 aged 84.

William Alexander Turner, my line, was followed by:

Wincy was 17 when her first child was born and 43 when she had Tom.


Wincy was noted in the newspapers to have taken in and cared for her father, Rev S.P. Morton, when he was old and ailing. She seems to have been closest to him, in location and spirit. Her stepmother, Lucy Ingram Morton, had died in 1882, and laid to rest at Red Hill. 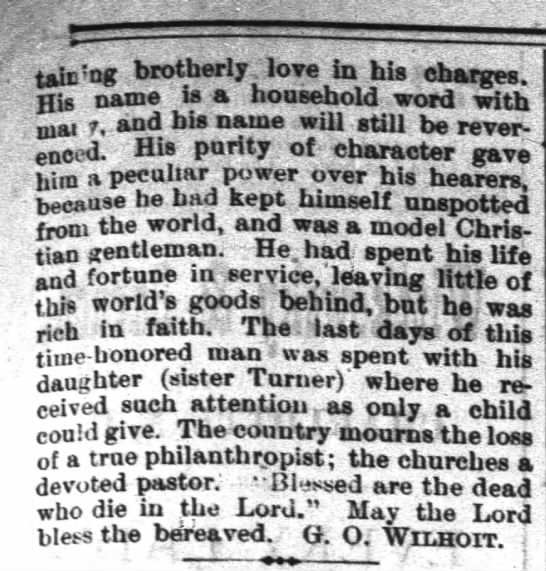 Elizabeth followed her father in death on August 21, 1885. Perhaps their was a communicable disease, or perhaps the wear and tear of raising 13 children and taking care of her elderly father had taken all she had to give. Wincy was only 48 years old.


George Washing Turner would live another 10 years and die while working on the Smith Plantation in Ansonville, a story my Grandfather would recount.

The back of Wincy's store bore a beautiful verse. During my visit to the cemetery, I photographed it, but could not read it. A kind reader of the post I featured it on, named Charles, knew exactly where it came from and left me the link.


It was a poem entitled, "In Memory of Florence C. Harris", Written by Mrs. S. J. Harris Keiffer and feautred in the book:

The verse says, " Her toils are past, her work is done,
And she is fully blest,
She's fought the fight, the victory won,
And entered into rest."


Rest well upon the Red Hill and no doubts, we will see you in Heaven, Grandma Wincy.

Posted by Jobs Children at 4:23 AM