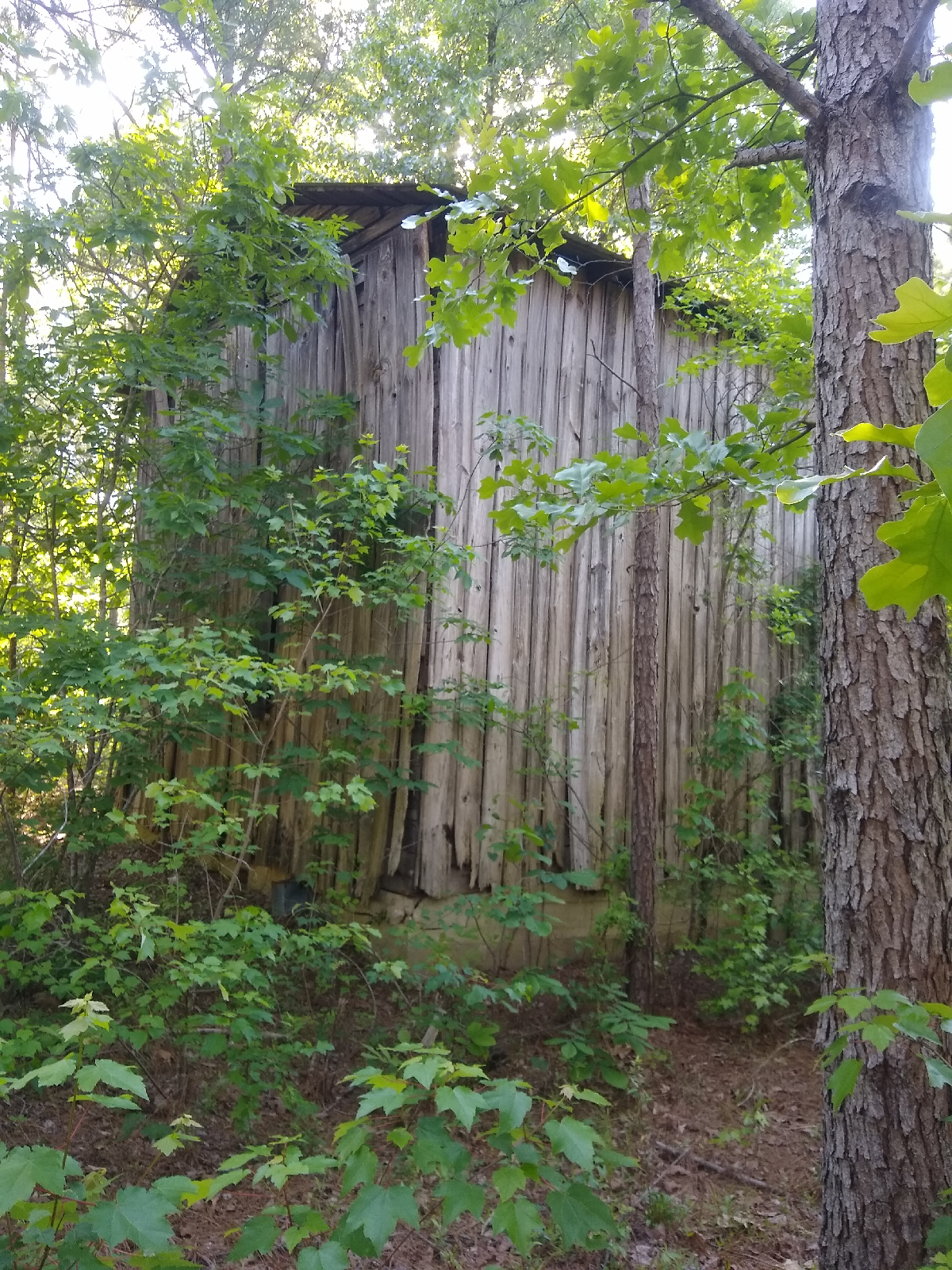 Delaney Elizabeth Braswell Lowthorp is one of those ancestors whose existence is growing dim.
Trace remnants of her extistence remain, but mother nature is taking over and attempting to erase those faint lines.

Laney is one of those women in my family tree who quietly existed and left only soft footprints in the sand.

Laney was born May 14, 1782, in the heart of the Revolutionary War.  Her father, Richard Braswell, was  a Patriot, several generations of his family being born in America. Richard ,and his daughter, Laney, were both born in Wayne County, North Carolina.

He recieved a pension for his service later in years. Below are statements Richard made, at age 78, in his pension application.

Burwell Braswell was a son of the couple and brother to Laney. The Rev. John Culpepper also holds a place in my family tree.

The family had moved to Anson County after 1810, when they are found in Johnson County, having remained in Wayne County until 1800.

Richard Braswell named his oldest daughter and second child, for his mother, as her name was Elizabeth Dulaney, who had married Richard Braswell, Sr. Laney's mother, Penelope Blow, was the daughter of Revolutinary War Patriot, Benjamin Blow and Priscilla Braswell Musgrave Blow. Delaney was the second of 9 children to Richard Jr .and Penelope.

Laney must have been a rebellious sort, after all, being born near the close of the Revolutionary War into a family of Patriots, how in the world, or why in the world would she marry an Englishman at the age of 20? But she did.

Francis Norton Lowthorp Jr. was born in Yorkshire, England. When he arrived in the American south, they tore that name up! I've seen it Lathrop, Lowthrop, Lowthorp, they didn't know what to do with it.

Francis Lowthorp's portrait is displayed in Lowthrop Hall of St. John's Masonic Lodge in New Bern, NC. He was Worshipful Master for fourteen consecutive terms, from 1792 to 1806. The name "Lowthrop" was mispelled. The correct spelling is Lowthorp. - quote from the portriat explanation, author unknown.

Francis, Sr. was born in Yorkshire, England about 1740. His profession was listed as an Exciseman. His three children were baptised at St. Mary's Church in Beverly . He had been married to their mother, Elizabeth Gerbot, in Beverly in 1771. He began an import/export business and it appears he may have settled briely in Jamaica or the Caribbean before chosing New Bern, North Carolina in which to settle. It appears he owned at least one ship, called the "Nancy", and possbly several more, which sailed to Jamaice on a regular basis. It is known he and his daughter Mary Lowthorpe Churchill were in Espando in 1794.

When Francis Lowthorp, Sr. arrived in America, it was only he and his 3 children. His wife, Elizabeth was not with them she may have died before they left, or perhaps on shipboard.

Francis established himself well in New Bern. He served as the County Coroner and was elected as a Justice of the Peace. He was a dedicated Mason and served as the Worship Master of the local Masonic Lodge for 14 consecutive terms from 1792 until his death in 1806. There, he continued as a Maritime trader and Merchant selling imports he'd brought from England, the West Indies and other parts of Europe.

He also had sizeable landholdings, including a tobacco plantation. Between 1800 and 1803, he faced some economic failings and lost most of his assetts, including the tobacco plantation and some personal property. At his death, he was in debt and the Masons paid for his funeral and the care of his wife and small child. 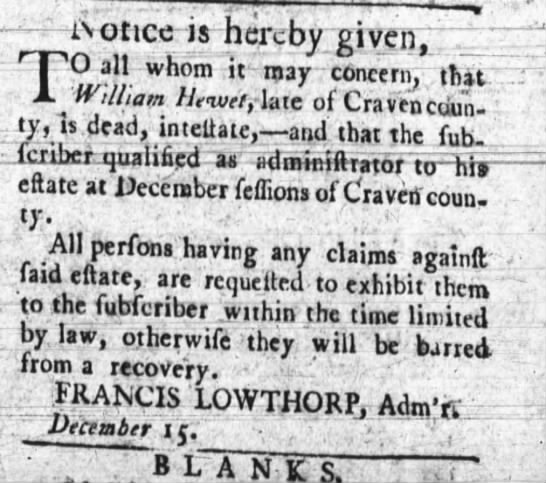 Francis had remarried on January 12, 1793, to a young woman named Katherine Hewitt and into that marriage a little girl named Sarah had been born.

Francis Lowthorp, Sr. was obviously not seen as a British loyalist, after having arrived from England as a merchant and trader. That's probably why Richard Braswell had no problem with Lowtharps only son marrying his daughter, Delaney. 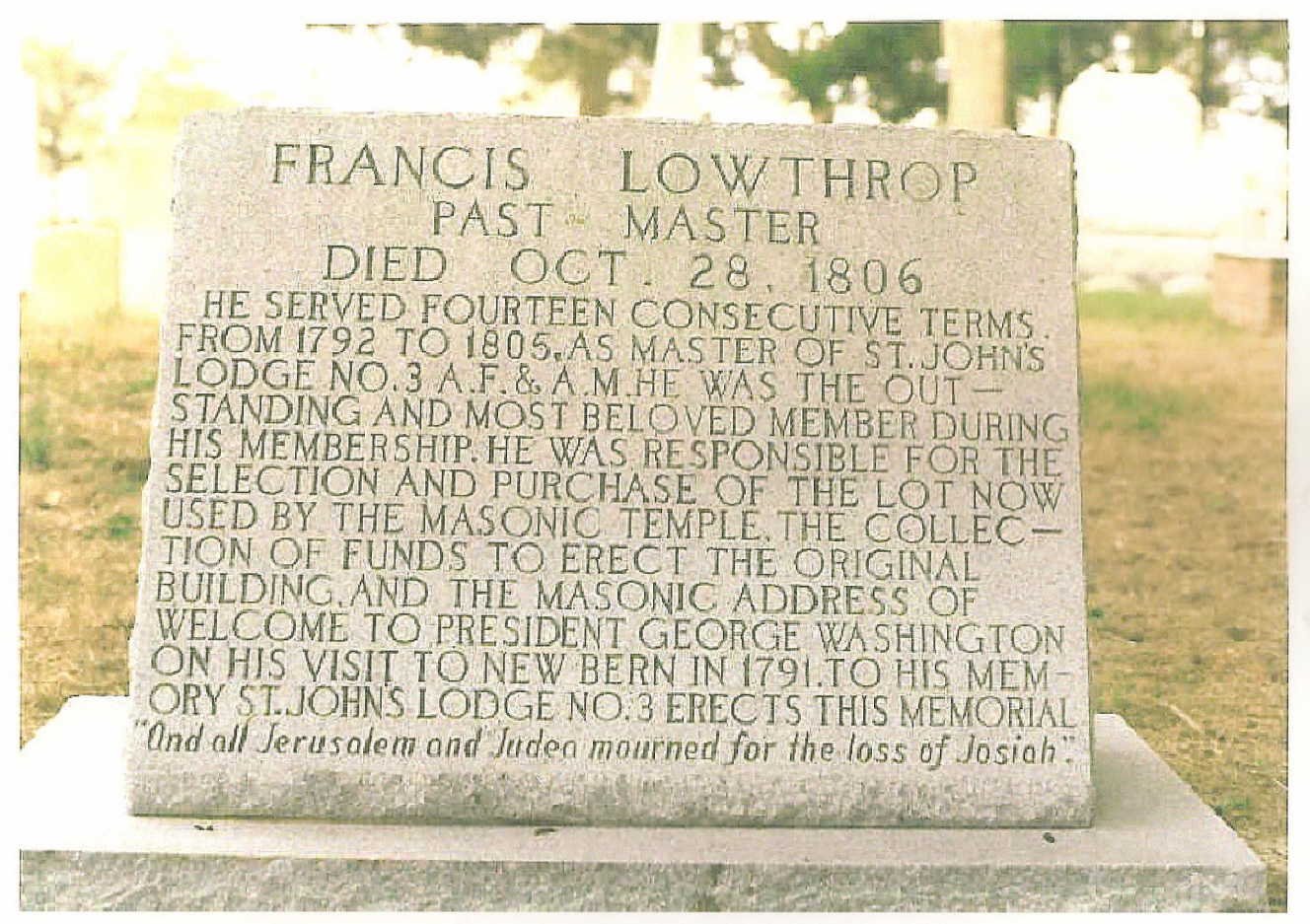 So while, a great deal can be known concerning Francis Lowthorp, Sr., not as much can be said for his son.What is known is that he slipped westward into Johnson County, North Carolina.

By 1810, where the young family is found in Johnson County, they appear to have had 4 children. Richard Braswell and wife, Penelope have also moved from Wayne County to Johnson County in 1810.

By 1820, they all are found in Anson County. Francis, instead of attempting to continue his father's business in New Bern, has taken up with his wife's family. He may have been escaping the debts his father had acquired upon his death. Katherine and her daughter, Sarah, remained in New Bern and are buried there with John, Sr. 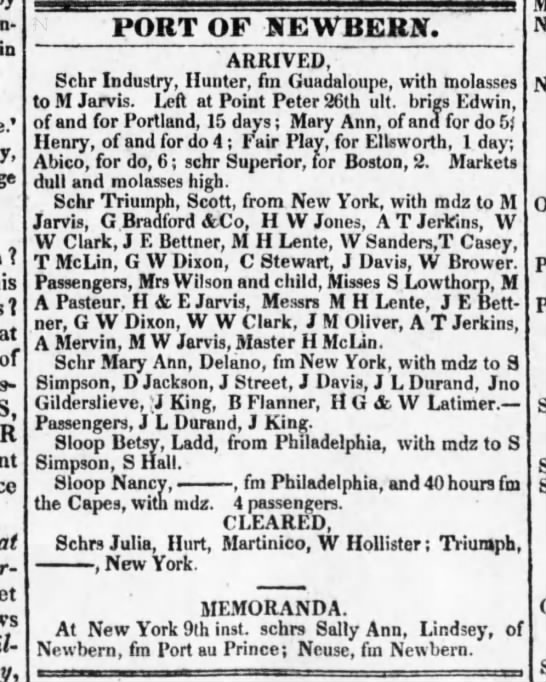 It appears to me that the daughters of Francis, Sr. continued with his importing business, and I wonder why Jr. and Delaney did not. In the above add, Misses S. Lowthorp is daughter Sarah, born by his second wife and M. A. Pasteur is his married daughter. The sloop Nancy, and also Betsy, is believed to have been his also. This is in 1828, 22 years after his death and his daughter are wheeling and dealing, going to New York and still importing from Philadelphia, like their father did.

In 1820, the Lowthorp Jr's are in the White Store area of Anson County with 6 children.

By 1830, the daughters are all married and there are 5 young boys under 20 in the home. Only 4 sons are known, so perhaps one died as a child or either this was a hired hand. Francis Sr was known to have owned slaves and had several he imported from the West Indies to run away, but Francis Jr. never did. That says alot.

1840 changes the scenario a bit. It  was also the last census for both Francis and Delaney. The next, the 1850, find their children in Anson and Union Counties. Some eventually move to Iredell.
My line, Joseph Erwin and Lavina Lowthorp will have a daughter, Cornelia Angeline, who will marry a Lemmonds and become my ancestor. She dies at 22, possibly of childbirth, so I know less about Angeline than I do Delaney.

The Braswell Farm was fairly near Red Hill Baptist Church and the town of Ansonville. A family cemetery was located there. Over time, it became overgrown and neglected, as many old family cemeteries do, and nearly forgotten. But not entirely, at some point, some of the Braswell family, many whom attended Red Hill, placed markers at  Red Hill to honor their ancestors. I do not know if their remains are there or not. This included Delaney "Laney" Elizabeth Braswell Lowthorp.

Posted by Jobs Children at 4:59 AM