Monday Mystery: Will Ed and the Well

The above story, from the Albemarle newspaper "The Enterprise", was concerning William Edward Aldridge, better known as "Will Ed".

Will Ed was the son of Josiah Aldridge and a full brother to my great-great grandfather Pink Aldridge.

Josiah Aldridge would marry twice. His first wife was Elizabeth Ledbetter. She was the mother of Will Ed and Pink. It is recorded that she had a brother named Alan Ledbetter buried just across the Rocky River in Anson County near the old homeplace of a man named Benton Turner, who I am also related to through my great-grandmother, Pennie Wayne Turner Davis. It is almost nearly certain that she was the sister of Catherine "Katie" Ledbetter who married Edmund Murray/Coley, who I've mentioned in past posts, most recently in this one:

Josiah's second wife and mother of most of his children, was Martha Elizabeth McIntyre, whom he would marry in 1857, about two years after the death of his first wife Elizabeth. 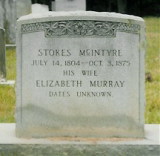 Now, to make things even more complicated, Martha Elizabeth McIntyre was the daughter of Malachi Stokes McIntyre and Elizabeth Murray McIntyre. Elizabeth Murray was the aunt of Edmund Murray Coley, the sister of his father.
Will Ed Aldridge was the oldest son of Josiah "Sy" Aldridge and first wife Elizabeth Ledbetter. He took for a wife Francis "Fanny" Murray/Coley, the daughter of Edmund Murray and Catherine "Katie" Ledbetter Murray. This family was sometimes seen or called by the surname of Coley as Edmund parents were never married and his mother was a Coley. If you recall, Catherine Ledbetter Murray was the sister of Elizabeth Ledbetter Aldridge, making Will Ed and Fanny first cousins. Are you still with me?

This was the course of things in the 19th century rolling green hills of the Tyson Community in southern Stanly County, where roads were few and folk were fewer and the Rocky River was the life's blood of the community.

Will Ed and Fanny Murray/Coley Aldridge would become the parents of 5 children:

Fannie died about 1885, leaving Will Ed a single father.

In 1900, Will Ed and his older children had all moved to the town of Ansonville in Anson County to work as farm labor on the big plantations that reigned in that area, just a few miles from the Stanly County border.

Lula Aldridge, the youngest daughter, may have fallen through the cracks of research, having been born after the 1880 census, and there being no 1890 available. She had gone to live with her grandparents after the death of her mother when she was still just a toddler. Her father had not remarried. After the death of her step-grandmother, Martha Elizabeth McIntyre Aldridge, Lula remained in the home of her young uncle, Jesse Brady Aldridge. As she joined in the lawsuit involving her siblings and her mother's siblings in the Murray/Carpenter case, her identity as a child of Will Ed and Fanny's was revealed.

Shortly after the 1900 census, having raised his children, Will Ed Aldridge continued to work upon the farm and old plantations of Anson County.  It was reported that he had went into the village of Ansonville to buy rope with which to clean out a well. He then traveled down the Grassy Island road.

-Wadesboro Messenger and Intelligencer - Last Thursday afternoon Mr. W. E. ALDRIDGE , who lived on the plantation of Mr. J. I. DUNLAP  in Ansonvilletownship , left his home without telling his family where he was going.   Friday morning he had not returned and his people and the neighbors becoming alarmed for his safety, search was instituted for him, which resulted in the finding of his dead body Friday afternoon in an old open well on the place on which Clerk of Court T. C.ROBINSON  lived until a few years ago.   The well was about two miles from Mr. ALDRIDGE’ S late home and had about twelve feet of water in it…..
What happened on that fateful March day 110 years ago? Was Will Ed after some thing in that abandoned well? Had he secreted a treasure in its depths and then designed to retrieve it? Or had his demise arisen from foul play? Was he robbed and tossed in the well to perish?

This mystery of Will Ed and the Well has never been solved. There have been many theories pondered over it and in the Aldridge history, a mention is made of possible racially motivated vengeance. However no one has ever been arrested and the results of the inquest were not reported. 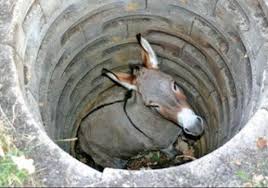 Posted by Jobs Children at 8:17 PM No comments: 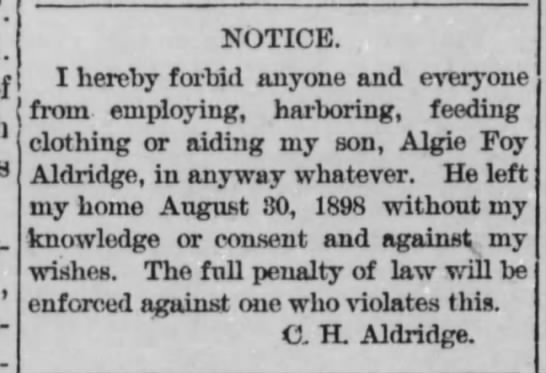 
Algie Foy Aldridge was the youngest son of Caleb Hampton Aldridge, the eldest son of Henry Garner Aldridge and Priscilla Murray Aldridge. When "Hamp", as he was better known, posted this ad in the Stanly County, North Carolina newspaper "The Enterprise", Algie Foy would have been 17 years old. He was born on August 4, 1881 and must have inherited that "mean streak" that ran through the Murray line and into the Aldridge line through his grandmother Priscilla. While some Murray descendants did not seem to inherit this unlucky trait, several in any given generation seem to have suffered from it.

Algie's discontent seemed to show at an early age.

I wondered about his name, "Algie Foy", where did that moniker come from. I think Algie might have been short for "Algernon" and Foy just a trend, as I've seen many "Roy's" and even "Hoy", "Loy", "Doy",and "Coy" being popular names and middle names, for males of his generation. But he was not named for any apparent ancestor. His mother was Elizabeth "Bettie" Floyd  McSwain Aldridge, who had first married John Calloway McSwain, who perished in the Civil War. Hamp Aldridge was her brother-in-law and when her sister Sophia Floyd Aldridge passed away after bearing Hamp only one child, George Gilliam Aldridge, Bettie and Hamp married. Bettie brought a child of her own, Martha Ella McSwain, who would have a daughter by her step-father at the age of 18, and the family would survive this atrocity and remain intact.

That is how powerful a man Hamp Aldridge was in the community. He had a tendency to do whatever he pleased and get by with it. Hamp carried the Murray mean streak. It may have been this trait that drove his son away from him at the age of 17, and Hamp wanted to make sure the boy had no support in his quest for freedom.

Algie must have returned home the prodigal son because he turns up in the 1900 census in his father's house, although the census taker made meatloaf with it.

Hamp "Auldredz" is Caleb Hampton Aldridge, followed by Elizabeth, his wife. Nannie was actually "Fannie", who never married and passed away in 1915. "Alpha" is actually Algie Foy, "Saly E" is younger sister Sarah Elizabeth. "Inese" is Inez "Nezzie" McSwain, Hamp's daughter with his step-daughter Ella, and "Lenoiro" and "Lena" were her daughters Lenora and Lina.

Algie did not remain in his father's home long, however. He removed to Cabarrus County, and probably began his lifelong career in the textile industry working in the Cannon mills or similar ones located throughout Concord and nearby Kannapolis. There he met his wife and future victim, Cora Murphy.

And I did not mean "victim" in any sense but literally.

Algie and Cora, his Irish bride, show up in the City Directory of Columbia, South Carolina in 1909. He is a Mill Operator.


Algie's wife Cora was the daughter of James A. and Margaret A. Porter Murphy. Her father was born in Ireland and her mother in North Carolina. Her father, James Alexander Murphy was one of those grand old patriarchs of the 19th century who outlived several wives and was fathering children well into his sunset years. Born in 1816, he died in 1906 in Columbia, Richland County, South Carolina. In the 1910 census, Algie and Cora are shown living in the household of her widowed mother and a number of her siblings, including youngest brother, Emmett.


The Columbia City Directory traces their movements and Algie's career changes through the next decade. Algie's name is seen variously as "Alpha", "Alva", "Alfie", "Ollie", and "Algie". It may have been a derivative of the proper name "Alva", which was used randomly in and around Stanly County where he was born.


The next decade would also show the train of instability.

By 1922, the family had moved to 308 Bull Street and Algie was a News Agent.
On 1923, Algie had again became Mill fodder and moved his family to 709 Green Street, which is now only an Oak tree guarding the end of a dead end road.
709 Greene Street.

Five years later, Algie was now employed as a Jitney Driver and had moved to an apartment building on Park Street, a few blocks over and one block off of the former home on Assembly Street.
Park Street Apartments

By 1930, son Leo has moved out and a teenaged Vermelle is only at home.

In 1934, Algie and Cora are still at the same location on Park Avenue and Algie is still a driver.

The above article is from the May 19, 1938 edition of The Greensboro Record.  The story was reprinted in newspapers far and wide, giving pretty much the same information. North Carolina, South Carolina and even New York newspapers reported the story of the textile worker who openly admitted the murder of his wife after finding a photo of another man in her possession. The readers were shocked. He didn't deny it. He even blamed it on this unnamed other man whom he assumed his wife was interested in. He had been thinking about the murder for three weeks. It was premeditated. The bad Murray blood was running hot in Algie Foy Aldridge.

So what happened next?

Cora did not die immediately, but passed soon after arriving to the hospital.

Her death certificate explains her horrific cause of death with the words "Hacked", "Axe" and "Homocide". In the end she bled to death?

But what of Algie? Did he get his day in court? Did the papers print anything of that?

The amazing answer is "No". 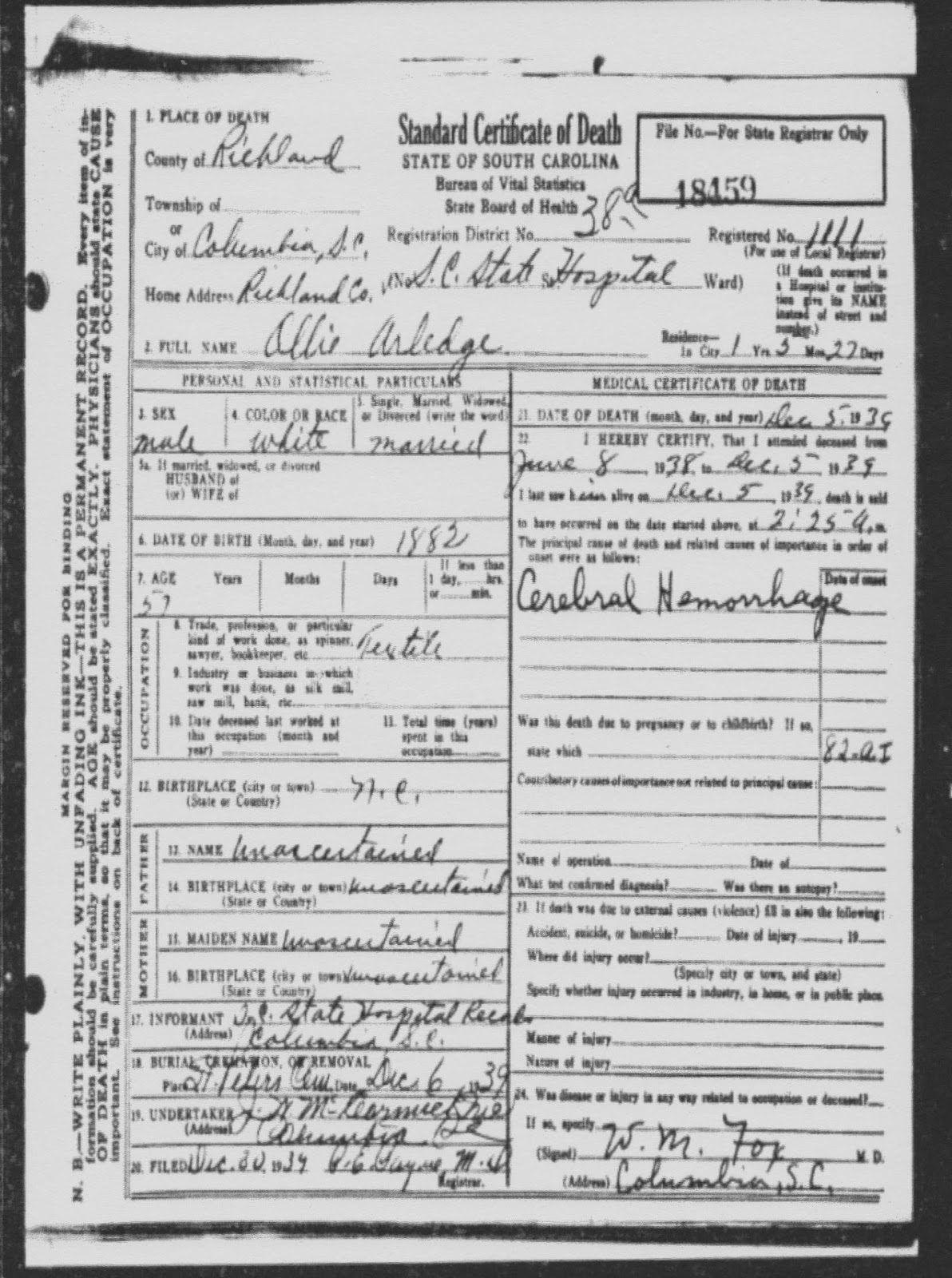 On December 6, 1939,  a year and a half after he murdered his wife Cora on May 18, 1938, Algie Foy Aldridge died of a cerebral hemorrhage. He was treated at the South Carolina State Hospital and the doctor notated that he had been under his care since June 8, 1938. Algie had spent about 2 weeks in jail before being declared insane and mentally incapable of standing trial. He spent the remaining year and a half of his life in psychiatric care. Was the cerebral hemorrhage a sign of a brain disorder that may have attributed to his lack of judgement and irrational behavior in the murder of his wife? Possibly. This cause of death shows up in many of the descendants of the Aldridge and Murray families. Is it hereditary? Probably.

There were many stories that began and/or ended in the rolling hills of the Tyson community of Stanly County. Algie Foy Aldridge's story was just one of them.


Posted by Jobs Children at 8:03 AM No comments: