In researching the Murray family of Stanly County, I have found it very useful to research the families they had connections to, either by living with them, near them or interacting with them in other ways. Sometimes, and just sometimes, you are able to find things and solve mysteries.

This particular mystery involved the "Elizabeth Emmanuel" that "Anna Murray" was living with in the 1870 census.


As you can see, we find a household of women, which was not unusual in the first census after the Civil War. So many families lost their men, due to War, disease, and flight westward to avoid the first two. Stanly was a County of women, boys and old men. The young men of working and marriageable age were few and far between.

It did not take long to discover that Elizabeth Emmanuel (the surname most often seen as "Manuel", Susan Cagle and Evie L Cagle were sisters, daughters of Charles and Elizabeth Springer Cagle, of the Big Lick community.

A look at the 1860 census and 1850 census, ten and twenty years prior would reveal that. In 1860, we see all three women, Elizabeth, Susan and Evie L. with their parents. In the 1850 census, their brother David M. Cagle, is also still at home.


Also in both censuses, living with the family, as conspicuously, is Mary A Murray. Land records would corroborate that Elizabeth Emanuel was the daughter of Charles Cagle.

Charles Cagle to Sussannah Cagle and others

This Indenture made the  20th day of January A D 1862 between Charles Cagle of Stanly County, State of North Carolina of the one part and Susannah Cagle, Elizabeth Manuel and Eve Cagle, my three daughters, of the county and state aforesaid, Witnesseth that said Charles Cagle, of paternal love and affection has given, demised, transferred and conveyed and by these presents doth give, devise, transfer and confirm to my three above named daughters their heirs and assigns forever, a certain tract of land situate (sic) in Stanly County and N. Carolina on the waters of Stony Run.....100 acres.....

It then goes into all of the poles and the oaks and the behoofs, etc. But you get the picture.

Sussanah would pass away in 1880, and was included in the Mortality schedule of that year, of "dropsy".

But 25 years after Charles Cagle conveyed land to his three daughters to ensure their future, as two were single and one was widowed, as he must have known his heath was failing and was concerned over their future, the surviving two daughters enacted transactions with the land to ensure their care and well-being into their old age.


The 1880 census lists Elizabeth as a Cagle again, living with younger sister Evie, and a four year old "John" is listed as her grandson.

He is as much a mystery at this point as the 17 year old Sarah Whitley in the 1870 census, who I believe was a niece as the family had strong connections to the Whitley family. Also, I am not sure John's surname of Cagle was correct.

What follows is an interesting set of deeds and bonds involving the two surviving sisters, Elizabeth Cagle Manuel and Evie L. Cagle.

This is the deed between "Elizabeth Manuel and Evy L. Cagle of the state of North Carolina and County of Stanly to Alexr Whitley and wife Mary E. Whitley" for the land mentioned in the below indenture and bond.

Know all men by these presents that I, Alexander Whitley of the said county and state am firmly bound unto Elizabeth Manual and Evey L. Cagle of the aforesaid county and state for the sum of two hundred dollars...for such payment I bind myself my heirs and assigns firmly by these presents signed sealed and delivered this the 12th day of December 1881. The condition of the aforegoing obligation is such......that Elizabeth Manuel and Evey L. Cagle executed and delivered to the said Alexander Whitley a deed for 100 acres of land more or less under the condition of paying for said land the said Alexander Whitley is to take care of and provide for Elizabeth Manuel and Eva L Cagle a suitable Reasonable and just maintenance during their natural lives

Stony Run Creek is in the Frog Pond area of Stanly County.

Mary E. Whitley was Mary Elizabeth Cagle, their neice and daughter of their brother David M. Cagle and his wife Michelle Hinson Cagle, who had married Alexander Whitley, the son of Susannah Whitley and Joshua Christian Burris on April 17, 1881.

Alexander Whitley - Burris was a troubled man, the product of an illicit relationship between and married man and his single mistress, who fell into a life of crime and alchoholism. He remains in the annuls of Stanly County history as the only man in Stanly County to be hung. His crime was supposedly his involvement in the death of a school teacher named Burton Tucker in Arkansas. The two Stanly County men had ended up in Arkansas with Judy Burris, the young half-sister of "Alec" Whitley, for whom both men were rumored to have had a fondness for.


Among the other rumors surrounding the legend of Alec Whitley was that he was also somehow involved in the disappearance of his brother-in-law, Phillip "Bud" Cagle, his supposed partner in crime in a series of Cabarrus County breakins, that the "boys" would hit across the county line and then slither back into Stanly to hide.

I've also heard that he may have had some hand in the death of his wife Mary E. Cagle Whitley. The two had a daughter, Nealie Ann, who was born in 1885, and afterwards, Mary disappears.

For all facts and purposes, it seems that Alec Whitley did not fullfill his duties, and perhaps Mary died by  1886, when the sisters Cagle struck the same deal with George L. Whitley.


I believe this is George Lindsey Whitley who first married my Great Great Great Aunt Rosetta Aldridge and then  after her death, married Sarah Elizabeth Burris and was the son of Benjamin Lindsey Whitley and wife Margaret "Peggy" Eudy Whitley. He eventually migrated to and passed away in Hot Springs, Arkansas in 1929. 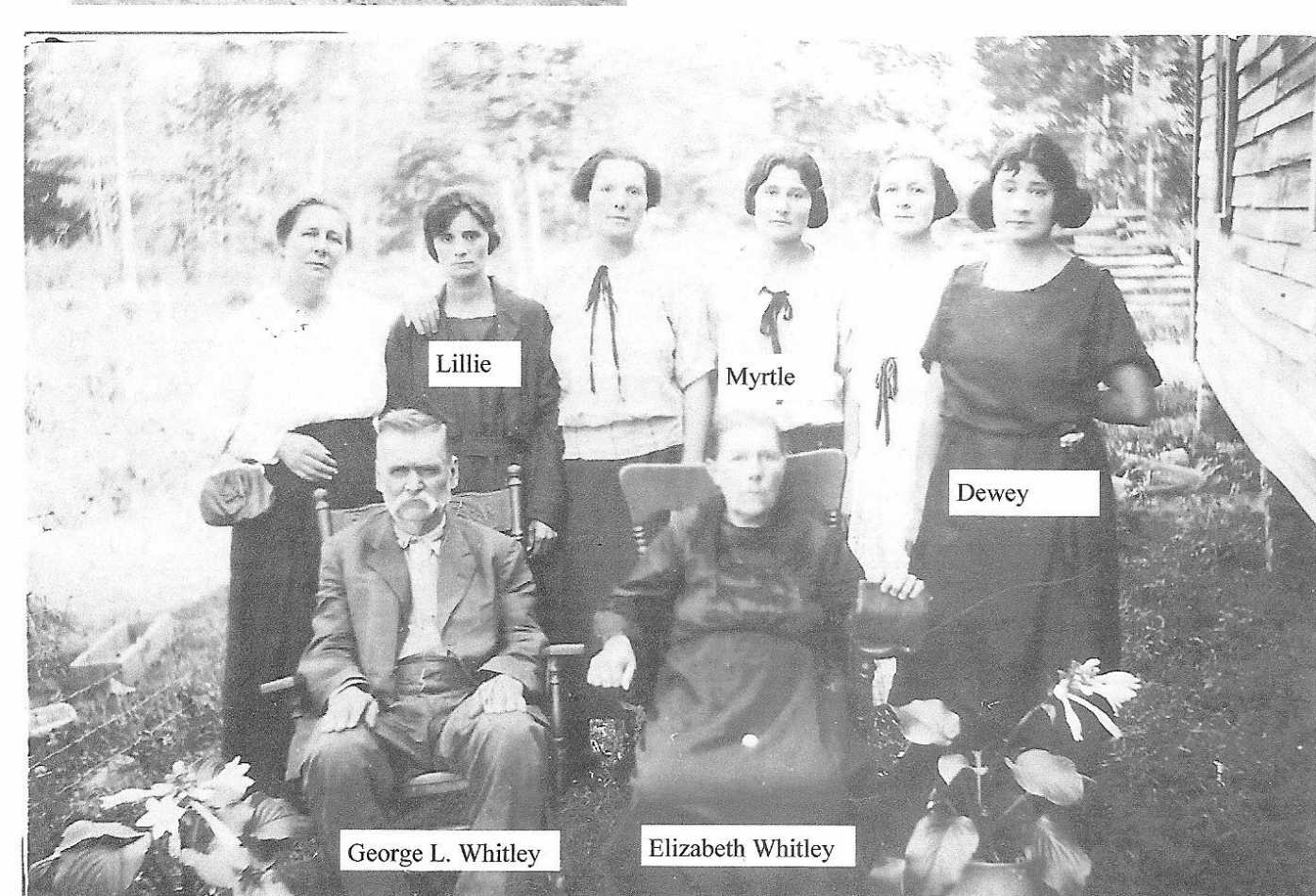 This is the deed for the 100 acres on Stony Creek adjoining E. Williams  and P Smith mentioned in the below bond.


Find a Grave link to Grave of George L. Whitley

Know all men by these presents that I, George L. Cagle of the County of Stanly and State of North Carolina am held and firmly bound unto Elizabeth Manual and Evy L. Cagle of the county and state aforesaid......200 dollars.....10th day of March AD 1886..100 acres of land....Lying on the waters of Stony Run Creek, adjoinnig the lands of E. Williams, P. M. Smith and others and more particularly described in said deed and whereas the said George L. Whitley as payment for said land is to take care of provide for maintain and support in a suitable reasonable and proper manner the said Elizabeth Manuel and Evy L. Cagle during their natural lives......etc.


But who was the Mr. Manuel that Elizabeth had married?

The Manuel family is one I want to study a little more in depth due to their connections to the Murrays, but for this post, I only want to concentrate on one Manual, John the husband of Elizabeth Cagle.

John was the son of Henry Manuel and his wife Winny Almond Manuel. He grew up in Almond township in Stanly County.


According to the 1850 census, he was born about 1831, meaning he was about 6 years younger than Elizabeth.

No marriage license can be found for John Manuel and Elizabeth Cagle, but they were married prior to 1856.

John Manuel must have had an ailment of which he knew would lead to certain death. He wrote a will on May 19, 1856.

I John Manuel of the County of Stanly being of sound mind and memory but considering the uncertainty of my earthly existence, make and declare my last will and testament, in the manner and form following, that is to say, First that my executor hereafter named shall provide for my body a decent burial suitable to the wish of my relations and pay all funeral expenses together with my just debts howsoever and to whomever owing out of the money that may first come into his hand as a part or parcel of my estate. Items I give and convey to my beloved wife all the property which she had at the time that we were married (this indicates that maybe Elizabeth was in possession of some lands or other property at the time of the marriage).

Item I give and devise to my father all my land, mare crops and everything else, this to pay my just debts and after they are paid, if anything left him to have and to hold forever. And lastly I do hereby constitute and appoint my trusty father H. Manuel my lawful executor to all intents and purposes to execute this my last will and testament...whereas I the said J. Manuel do hereunto set my hand and seal this 19th day of May 1856.

The Will was proabted in the Stanly county court during the May 1857 session. Also in the same session of Court, Elizabeth Emanuel made an appeal for her year's allowance as widow.


"Your petitioner Elizabeth Emanuel humbly complaining would represent unto your worship that she is the widow of John Emanuel who lately died in the county aforesaid seized and (illegible...hopeless? haseples?) of a considerable personal estate out of which she is entitled to her years allowance..etc.

Elizabeth is represented by A J Dargon in the petition and the committe signed at the bottom was  Wilson B Herrin, Esq., Jesse Hathcock and Joseph Morton.

To the Worshipful the Justices of the Court of Pleas and Quarters Lesprove (illegible)  for said County for August term 1859, We  Jordan C Kennedy Justice of the Peace of said county, and E. D. Ingraham, Tillman L:ittle and G. W. Dunn freeholders in obedience to the (illegible) omnet? order proceeded on the 13th day of July to view the estate of John Manuel deceased and out of the property on hand we have laid off and allotted to Elizabeth Manuel widow as follows, that is to say,

And there being no crop or provisions on hand to make a comfortable provision for the said widow for a year we assay the deficiency to the sum of $54 & 85 cents to be paid to the said widow by the executor or administrator of the said John Manuel deceased and we have further laid off and allotted to the said Elizabeth Manuel one bed and it's furniture & one wheel and pair of cards as her absolute property and put her in possession of the same.


I can not acertain the exact date of death of Elizabeth Cagle Manuel or her final resting place. Many have her listed as being the same person as a Millie Elizabeth "Betty" Cagle who married Lewis Brown, but they are most certainly two separate people. And Bettie Cagle Brown, is an entirely different story herself.

Posted by Jobs Children at 11:48 AM No comments: