Wolf Mountain is one of the small mountains now considered inside of the City of Albemarle, or close to it. I found mention of it in several deeds and from it's earlies descriptions, was never considered a large mountain. As far as its name, I am not sure if it came from the animal, Wolf, and perhaps a wolf den was once on it, as in the early days of this area, Wolves, Bear and even Buffalo dwelled and were commonly seen. There were also people named "Wolf" who lived here, so it could have been named for an early owner.

It began, however, as part of a huge tract that belonged to Will Stone, who, like Henry Mounger, Hugh Ross, and the Crump Brothers, John and James, then sold it in 100 acres lots to other settlers coming into the area from Virginia, Pennsylvania and more northern counties of North Carolina like Warren, Franklin and Chatham.


John Ozier  100 acres  Warrant #7348 Issued Feb 1, 1816 by Will Stone to John Ozier for 100 acres on the West side of Rocky Creek (Rock Creek that most Stanly Countians will be familiar with because of Rock Creek Park), and joins a hill called Wolf Mountain.; entered Oct 30, 1815. 100 acres surveyed June 18, 1816 by David Cochran, on West side of Rocky Creek, border begins at John Birds corner Blackjack, Tinch Carter and Allen Ozier, chain carriers.

The Ozier family is not one that I am familiar with. They did not leave a significant mark on Stanly County, but herein two of them are named, John and Allen.

John Ozier first shows up in 1800 census for Montgomery County, NC (keep in mind Stanly County is still part of Montgomery at this point, until 1841). He is not the only Ozier. Also listed is William, Jacob and William Jr. 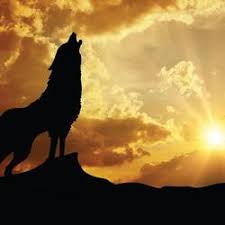 In 1810, he is still here, living near McCorkles and Greens. There is no 1820 census for Montgomery County. It was lost or burned. In 1830, John Ozier is still in Montgomery County, on the future Stanly County side,  living right next to a Jeremiah Ozier. Other neighbors were Edward Slaughter, Tyron Morris, Tobias Kendrick, Martin Hill, Seth Andrews and Marmaduke Hogan. If none of those names, with the exception of Seth Andrews, it is because they all belong to a huge swath of people who migrated to Tennesee in the 1830's.

The Oziers were a very interesting family. A William Ozier was the first one to show up in the 1790 census. According to an Obituary for Jacob Ozier Jr., a son of Jacob Ozier Sr. and a grandson of William, he was born in Montgomery County, North Carolina. His family was of French Hugenot origin. John, who lived in what turns out to be the area currently occupied by Walmart and Hobby Lobby in Albemarle now, was the Uncle of this Rev. Jacob. While Jacob Sr. moved to Alabama and Georgia, John and Allen, (who turns out to be his son), end up with a lot of their Stanly (Montgomery County) neighbors in Carroll County, Tennesee.

William Ozier Sr. first filed a land grant in Montgomery County on  May 16, 1792 on the "North East Side of the Pee Dee River. He was also listed in a 1787 Tax List, so the family arrived her quite early. 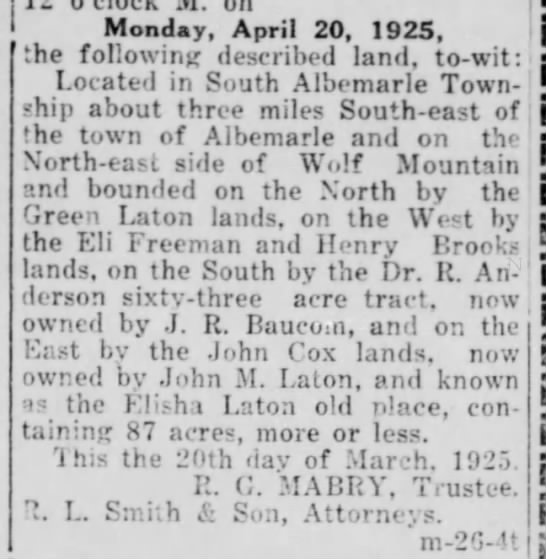 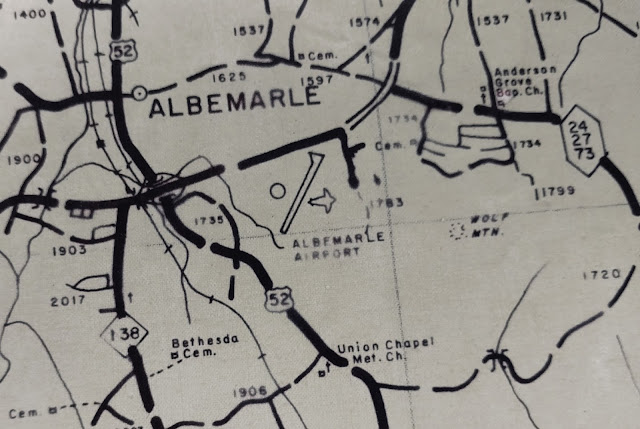 I found Wolf Mountain on an old map. It lay south of the Anderson Heights area and east of the old Albemarle Airport, where Walmart and Olive Place shopping centers now exist. With this information I went looking both in person and on modern Topographical maps and found Wolf Mountain. It lies east of Groves Road and the foot of it marks the beginning of Stonehaven Development. Yorkshire Drive climbs up its eastside.

Some folks found the relatively unoccupied hill a good place to make alchohol and have fun. Unfortunately for them, the cops found them out. 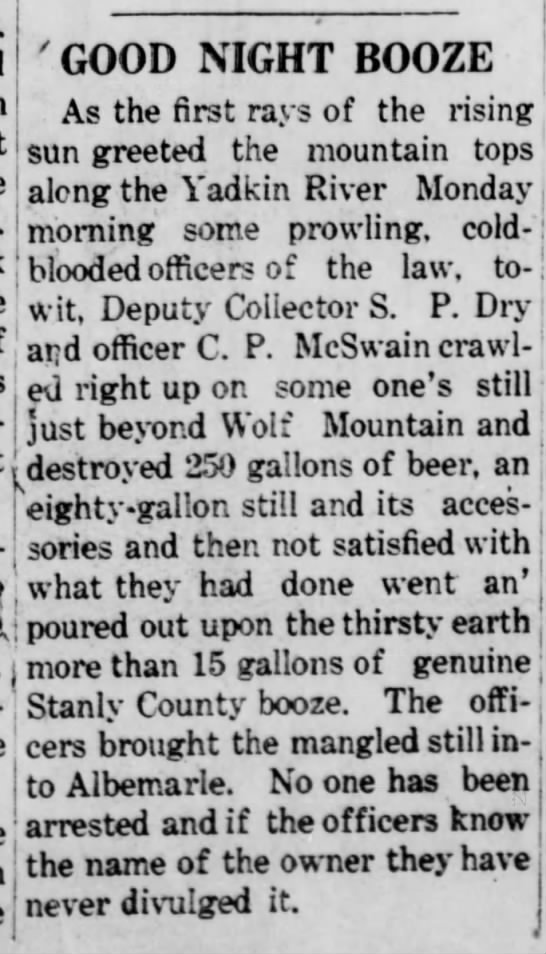 
Wolf Mountain is located just beyond Anderson Heights, which was part of the old lands and farm of Dr. Richard Anderson, who deeded Anderson Grove Baptist Church to the Congregation and whose name the Anderson Grove area still bears. It has been wholey unoccupied until just recently, when additions to the Housing Development have started to climb up its Southeastern side.

The above dirt road climbs to the top of Wolf Mountain. I did not go there. You can see the landscape in the distance. Wolf Mountain lies behind Walmart, less than half a mile. Groves Road is the closest to it on the south side, at the foot.

Looking out from the side of Wolf Mountain toward Albemarle. All you see is hills and woods.

The housing development at the base of Wolf Mountain. Yorkshire Drive crawls up the side.

From the pool house at the beginning of Stovehaven Drive, you can see Wolf Mountain rise in the background.

Beyond the pavement, the road climbs.

Looking out toward Albemarle and the foothills of the Uwharreis.

Posted by Jobs Children at 12:07 PM No comments:

In Search of Ugly Creek Mountain

Going through old Montgomery County deeds before 1841, it helps to know what citizens lived on what side of the Pee Dee and the location of creeks and other landmarks to determine if the deed applied to Stanly County (West Pee Dee) or Montgomery (East Pee Dee). Yet, even prior to that, we have deeds in Anson County, as Montgomery, including present Stanly County, was part of Anson until 1779.

I know that George Davidson lived in what is now Stanly County and was a prominent figure in the area, serving in several distinct political offices and with a distinguished military careet to boot. I know where Ugly Creek is, running between Norwood and Aquadale to the Rocky River. This deed was most definately in present Stanly County. John Hardy may have even been the person who gave Hardy Creek it's name. 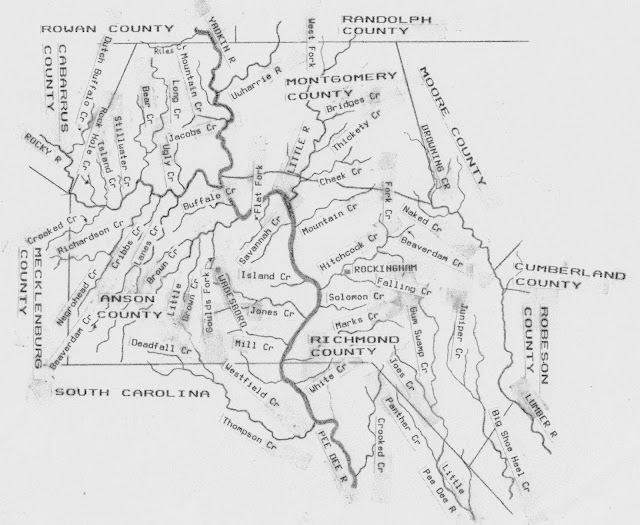 I am very familiar with Ugly Creek. It flows through Tyson Township, an area rife with family origin in my Family Tree, and flows into the Rocky River, which then shortly feeds into the Pee Dee, every southward flowing through South Carolina to the Atlantic. It even has two branches, South Ugly Creek joins Hardy Creek and lies just west of Ugly Creek. Ugly Creek is featured on this map of area counties prior to the 1840's when Stanly was carverd from Montgomery. Still, here borders are very clear, the Yadkin being her eastern border and the Rocky being her southern.

Given this scant information, I knew that John Hardy was my key. Finding that "Hardy" wasn't a common name in Stanly County, it seems John was the only one, and had to be the individual for whom Hardy Creek was named. As Hardy Creek and Ugly Creek run in fairly the same direction and were close together and interconnected, it narrowed the area of my search. 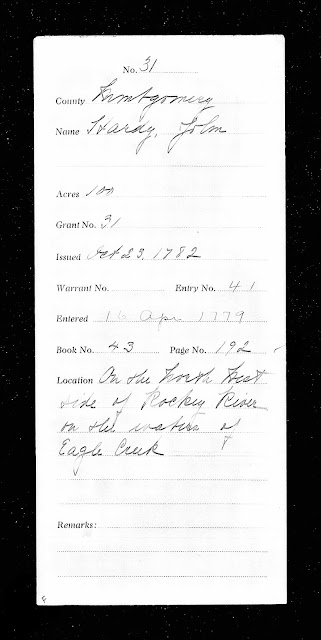 John Hardy first entered a grand for 100 acres on April 16, 1779, "On the North West Side of Rocky River on the Waters of Eagle Creek." Eagle Creek, that's a new one on me. Could it have been renamed Hardy Creek for John Hardy?


His neighbors appeared to be William Irby, David Miller, and James Roper. James Roper was among a group that migrated to Tennesee around 1820. William Irby appears in the 1790 and 1800 census of Montgomery County. John Hardy does not. However, I believe he was there, perhaps his name misspelled. He married Mary Tyson. Tyson was a very prominent name along this section of the Rocky River. The township in which John Hardy lived even came to be known as Tyson.

Research appears to show that Ugly Creek Mountain was located at the "headwaters of Ugly Creek" which began at a Spring.

My search took me to the Map Collection at the Stanly County Museum and History Room. We are so fortunate to have outstanding resources for research in Stanly County. Many other counties I have visited are not so lucky.

This map shows Ugly Creek in conjunction with Hardy Creek.

This map shows John Hardy's 100 acre grant lying at the headwaters of Ugly Creek.  Silver Springs Church is shown on Hwy 138 west of the Hardy Grant.

By the time that Stanly County came into existance in 1841 and Silver Springs Church was founded in 1857, the family names owning the property in this area were Kimrey, Cooper, Hudson, Mauldin and Foreman. By the 1880's, Ugly Creek Mountain seemed to be in the possession of the heirs of Manlove Kimrey.


First organized in 1857, the Silver Springs Baptist Church near Norwood began with 7 charter members. It was named Silver Springs because a large spring nearby was thought to contain silver.
The church members originally met under a brush arbor and then built their first building in 1858. The first meeting of the Stanly Baptist Association was held here in December 1885.
The first building was used until a new sanctuary was built in 1889. The church continued to grow and by 1908 it was one of the larger congregations in the county with 312 members. The current church building was constructed in 1927. An educational building was added in 1970 and a fellowship building was dedicated in 1987.
Knowing that Silver Springs Church was named for a nearby spring said to contain silver, brings together mentions in much earlier deeds mentioning a spring in the area that fed into Ugly Creek, which began as runoff from this small nearby mountain.

Looking at old maps, deeds and church information, I believe I have zeroed in on Ugly Creek Mountain on current topographical maps. 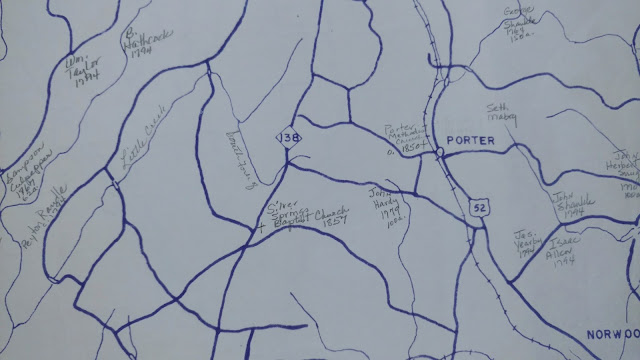 Ugly Creek Mountina lies to the East behind Silver Springs Baptist Church. There is no longer a road to it or on it. One bank can be seen rising behind the church over the cemetery. Glimpes of it can be seen to the South from Cooper's Road, toward the west from Cagle Road, and to the north from Silver Springs Church Road that comes out on 138 below the cemetery.

Seen in the distance from Cooper's Road.

Slope of Ugly Creek Mountain going up as seen across the fields from Cagle Road.