I've been focusing on various female ancestors in my family tree from varying generations. Up until this week, I had no idea who my 3rd Great Grandmother was, except that her name was Susan Webster who married John Faulkner. I still do not know who his parents were or where he came from. All I knew was that he had a previous wife named Patty and several children by her. He then married Susan Webster, had some children by her before he married her, and they raised a large family in the Lanesboro area of Anson County, one of whom was my Great Grandmother, Penny Wayne Turner's mother, Sarah Frances Faulkner.

It just bothered me that I didn't know, so I began digging, snooping and calculating. The two posts are Here and Here.

There were not many mentions of any Websters in Anson County, where Susan lived and raised her family, so I took the few scraps I had and looked at them theoretically, and things started coming together. I found a Nancy Webster who seemed to have 3 children in 1830 (a fourth would be born in 1832).  I found her mentioned in an 1834 deed wherein Elias Preslar, Sr. named her as the mother of his illegitimate grandson, Calvin, by his deceased son, Erasmus.

At first, I didn't find anymore on Calvin,except that he sold the property his grandfather had given him, 6 years later. Speculating that Calvin may have taken his fathers name as an adult, I found him in the 1840 census of Anson County, then I traced him as he moved from there to Scott County, Mississippi, where he married Miss Martha Thurman. They then moved to Bienville Parrish, L. A. and lastly to Polk County, Texas.

While tracing Calvins route and records, I discovered a Nancy Webster, from Anson County, NC, no less, who was in Scott County, MS by 1841, as she shows in the state tax list for that year. She married a mixed race Blacksmith named Enoch Perrett there. Also arriving in Scott County, MS about the same time was one Elias Preslar, Jr. Brother of Erasmus, son of Elias Sr. I also discoverd that his wife was named Mary Elizabeth Webster and the difference in the ages of her and Nancy Webster Perrett was about 2 years. In the 1840 census they were living side by side.

Elias Preslar, Jr. and family also migrated on down to Bienville Parrish with Calvin's family, but Elias didn't make it to Texas with the younger generation, including some of the Perretts. He died in Louisiana. I also discovered another female Webster in Anson County, who I believe was probably a third sister.

I am a long way from being finished researching this family. For one, two sisters, Ann E and Mary C Webster show up in Union County in its first census, just over the border from Anson, and they were born in Louisiana. Both school teachers, one marries a McCollough and the other remains single. They retire to Chester County, South Carolina. At one point, one of the sisters is found with Malissa Webster, who is in the 1850 census of Anson County, in the Lanesboro area. I believe Malissa to be one of the girls in the 1830 household of Nancy Webster and my Susan to be the other. And, of course, Calvin to be the boy. There may have been some Webster family members already in Bienville Parrish before Calvin and Elias arrived. Remember, Elias's wife was a Webster as well.

At any rate, I felt I had enough circumstantial evidence to put Nancy as Susan's mother in my Family Tree, just to see what would happen. 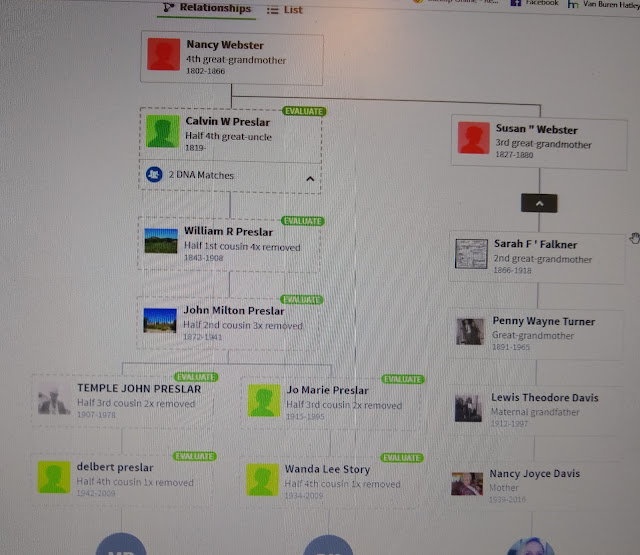 And Wa-Lah! Thru-Lines on ancestry.com has done its job. I share dna with descendants of Calvin.
It says he is my Half  4th Great Uncle because I have not connected Erasmus Preslar as the father of my Susan, but he probably was. The awesome thing is that I probably match more of Calvins descendants, but most of them have no idea where, or who, Calvin came from. They're from out west and have never read the deeds from Anson County, North Carolina. And they've been looking for Calvin Preslar, not Calvin Webster. But two of them have it at least partially figured out, and hopefully, because I have connected Calvin to my family tree, more of his descendants will be able to climb a little further up their family tree.

Illegitimacy in the past is the source of many a "brickwall' ancestor. Whenever I come across the situation in old court records and such, I try to figure out who the people were, and sometimes I put them in a 'free-for all tree" on ancestry, for descendants to find. Sometimes, I write a post to help folks breakdown those brickwalls, whether its my family or not.