My 5th Great Grandmother, Piety Lambert, appears only in one census record, the 1850.

For years, we referred to her as "Phida", due to a census error. Now, after reading the theories of a very observant and consistent researcher, I am in agreement. She was not "Phida", she was Piety, the honored matriarch that a daughter, Piety Caroline Lambert Page and mulitple granddaughters were named for.

In this census, she is next to her beloved husband, labeled "John Lambert Sr Baptist Minister".
All this census tells us is that Piety Lambert was born in North Carolina in 1774 and that she was living in a section of Stanly County called "Furrs".


By looking at the census, she is surrounded by a multitude of her children and grandchildren, Lamberts, Almond grandchildren of her daughter, Rebecca, etc. This was the area of West Stanly that would come to be known as the Community called "Lambert", all beginning with Piety and her husband John, the first Lambert to settle in Stanly County.

Even into my teenaged years there was a place called "Lambert Dance Hall" there, and the building still stands, a tribute to a town that is no more, but an area of land and a collection of houses that carry a name.

There is are three old cemeteries in the area that carry the names, "Lambert Cemetery 1, 2 and 3. In cemetery # 3, is a grave labeled "J L. D 1860" This is thought to be the grave of Rev. John Lambert.
The only other legible grave is "L. McLure Died 1886". This is the grave of Levina Almond McLure, a granddaughter of John and Piety via their daughter, Rebecca Lambert who married Pleasant Almond. Levina Almond then married James Boley McLure.

John Lambert, we believe, was born in either Franklin or Johnston Counties in North Carolina. He first shows up in Johnston County in 1800, and probably married Piety there about 1790-1794.  Research is ongoing. Piety's maiden name is unknown, but John began his ministry there. 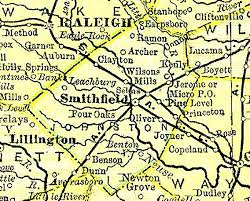 John Lamberts origins before 1800 is as foggy as those of Piety's. Three things can be determied; he was poor, he began his ministry there, and he was involved with a miniter named Whitley there. A number of Whitleys also  came to Stanly County. Being that Whitleys were the only family in Johnston County that I could find Rev. John Lambert with a connection to, it is my belief he married into the family. Huneycutts were also heavily found in Johnston County as well as Stanly County. So Piety was likely a Huneycutt if not a Whitley.

All of Rev. John and Piety's children came to Stanly County except for their oldest son, William. In talking to his descendants, whom DNA connects us to, William married first to an Angelican, and that fact may have caused the division between William, his parents and siblings. Williams sons were better educated than their Stanly County cousins, perhaps because William tended to stay around populous and more civilized areas while the rest of them were "in the country". 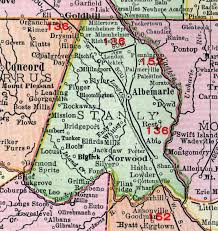 Y-DNA testing of a growing number of Rev.John and Piety's straight male-line descendants have proven that Rev. John was not a Lambert by male descent, but a Pace, a descendant of Richard Pace and Isabella Smyth Pace of Jamestown, Virginia. There are several Lamberts and Lambeths who end up matching the Pace descendants and all are descendants of Rev. John and Piety. It appears that Rev. John was a descendant of a particular Pace named William who married a Ruth Lambert. The couple were married in 1771. John was born in 1772. How he ended up a Lambert instead of a Pace is unknown, we may never know, but I do know there is not room for another generation in there. He was the son of William Pace. This does not mean he was the son of Ruth Lambert, only her husband.

As for Piety, most remains yet unknown. What I do know is for all the people trying to merge her into Mary Bray, daughter of Henry Bray of Chatham, you are wrong. Mary was Mary and Piety is Piety. Mary did marry John Lambert of Chatham, but he is not our John. The Chatham Lamberts were wealthy land owners. Our John Lambert was an intenerant minister for much of his career and was not wealth and never acquired more than 60 acres of land, that I can determine. The children of the Chatham Lamberts migrated to Randolph County, ours to Stanly. Two people can not be in two places at one time, and they were not  Mary is never seen as anything but Mary. She is not ours.


I don't know much about Piety, but what I do know is that she was not a daughter of Henry Bray of Chatham.

Piety was the mother of a large family, a dynasty, really, and dna is changing some of my earlier research.  The sons are pretty set, and I started a separate tree just to evaluate and look at my Lambert roots and theri descendants more closely. However, I need to clean up my standard family tree, because in my research and in family folders started by others, I had seen the name of a Susan Lambert Misenheimer thought to be a daughter of Rev. John Lambert. I couldn't find any record of her connection, or even existence, on paper however, except those of her descendants. She is not mentined in any deeds, etc. with a Lambert connection. DNA, however, says otherwise. Descendants of Susan have her hooked her up to our train and they match. So Susan may be an otherwise unknown (to me) daughter.

Known children of Rev. John Lambert and Piety were:

Grandma Piety, if you are listening, I need some help here. Help us to make you whole, and figure out who you were. Happy Mother's Day.