I believe we all have many different kinds of female ancestors climbing our family trees. Some were straight-laced and extremely pious, purest vessles of godliness and matronly sainthood. Others were lackadaisacally whorish, and devil-may-care. Some were highborn, educated,uppercrust and priveledged. Others were common, illiterate and of the earth. 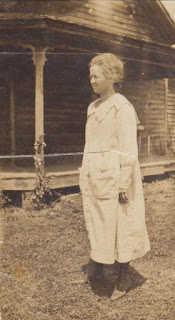 In my minds eye, I see Nancy Caroline Hudson, a second Great Grandmother of mine as perpetual discheveled.

Caroline was born November 21, 1852, near Cottonville in the Southern part of Stanly County. Her father was Burwell Hudson, one of the older sons of Ol' Joshua Hudson of Ugly Creek who had 22 children by 3 wives and lived nearly 100 years. Her mother was Sarah Lee, daughter of Calvin Lee and Elizabeth Duke of close to Center, or now, Norwood, NC. She was their firstborn child.

Cottonville is not more than a sign, two churches, a Volunteer Fire Department, an abandoned store and a gathering of houses, now. With lots of acres of cotton, still. In its heyday, the 1830's, it was larger than Charlotte and proclaimed by the New York Stock Exchange, to have the finest cotton in the land. This is where Caroline would grow up.

She would gain a brother, Marion Patterson Hudson, when she was 3, and two little sisters, Emma Frances, called Fanny, and Sarah Anne, in 1858 and 1860, respectively.

Caroline's young life would be paved with tragedy, as her mother would die shortly after the birth of Sarah. Caroline was 8. I'm sure she had to act as a surrogate mother until her father remarried two months later, to another Sarah, Sarah Arrena McSwain.

A fourth daughter, Lucy Ella, would join the family in 1862. Then the Civil War happened. Burwell enlisted. He didn't make it.


Caroline had attended the common school in the area, no doubt a little one room schoolhouse. There are attendance books in the NC State Archives online that show her and her brother present. During the War years, attendance became scant. Off to left of the childrens names, the teacher would notate who their parents were, usually the father. It's heartbreaking to see the name go from naming  their father, to months, or even a few years of nonattendance, to being named the child of  'Widow so and so".

In 1870, Burwell's widow, Sarah McSwain  Hudson, would marry old storekeeper, John Norwood. She was 39 and he was 73, yet the marriage would bring two children into the fold, Laura in 1872 and John Henry in 1874.


In the 1870 census, Sarah McSwain Hudson hasn't married yet. She is a widow living with Caroline, shown incorrectly as Camelia, instead of Caroline, and Caroline's little sisters, Sarah and Lucy Ella, the child of Burwell and Sarah McSwain.

As for the other 2 children of Burwell Hudson, they appear to have went to live with their maternal grandfather, Calvin Lee. In the 1870 census, Marion 16, and Fannie 12, are living there.

Caroline, now an orphan, would fall fate to a situation that haunted many a young fatherless child after the war, she became an unwed mother.

She had a son, James Robert Hudson, by a teenaged boy, James Robert Thompson, son of  William Craven Thompson and wife, Anna Blalock. This is the family in 1860. I blogged on Caroline before I knew this. A distant cousin descended from Caroline's legitimate children contacted me after the blog, to let me know they knew the identity of Caroline's oldest child, J. R., my grandmother's Daddy. Unfortunately, J.R.'s direct descendants, like my grandmother, died not knowing who his father was.

It is said they the young couple considered marriage when they got in trouble, but she was only 15, and he 14, and it was decided he would not yet be able to support a family at that age. The 1870 census found Caroline and her son living with her little sister, Sarah, who married J. Wesley Whitaker.

As for J. R. Thompson, he would move first to Chesterfield County, South Carolina and then to Marlboro. He married Effie Elizabeth Graham and had 10 children. 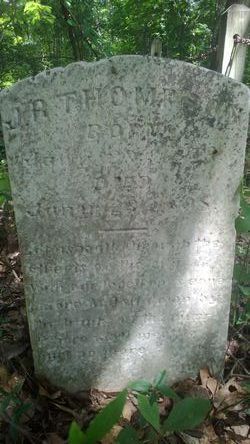 If you would like to read more about Caroline, just click the following link to my original blog post. Remember, at this point in time, I did not know who the father of her son was.


Despite becoming a teenaged mother, Caroline would marry at age 26 to Robert Dock "Dodie" Singleton. She lived a long life, dying in 1930 at age 78, and had 7 children with Dodie. 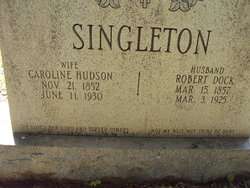 She is buried in the old Norwood town cemetery, in the Singleton section. Rest in Peace, Caroline.

The above photo is James Robert Hudson on the far right, son of James Robert Thompson and Caroline Hudson Singleton. To his left is his second wife, Nealie and his children, Reece Craven Hudson aka  "Ted" and Hattie Helen Hudson McSwain Thompson. The "Craven" in Uncle Ted's name tells me that J. R. may have known who his father was. By the time I came into the picture, grandma didn't know. But she told me all about Caroline and J. R., me being the only grandchild she had that she could talk to about her old photos, which I now treasure.

Posted by Jobs Children at 3:33 AM