Harriet Catherine Means had been born into an esteemed family of privilege in the social clockwork of antebellum Mecklenburg County North Carolina. 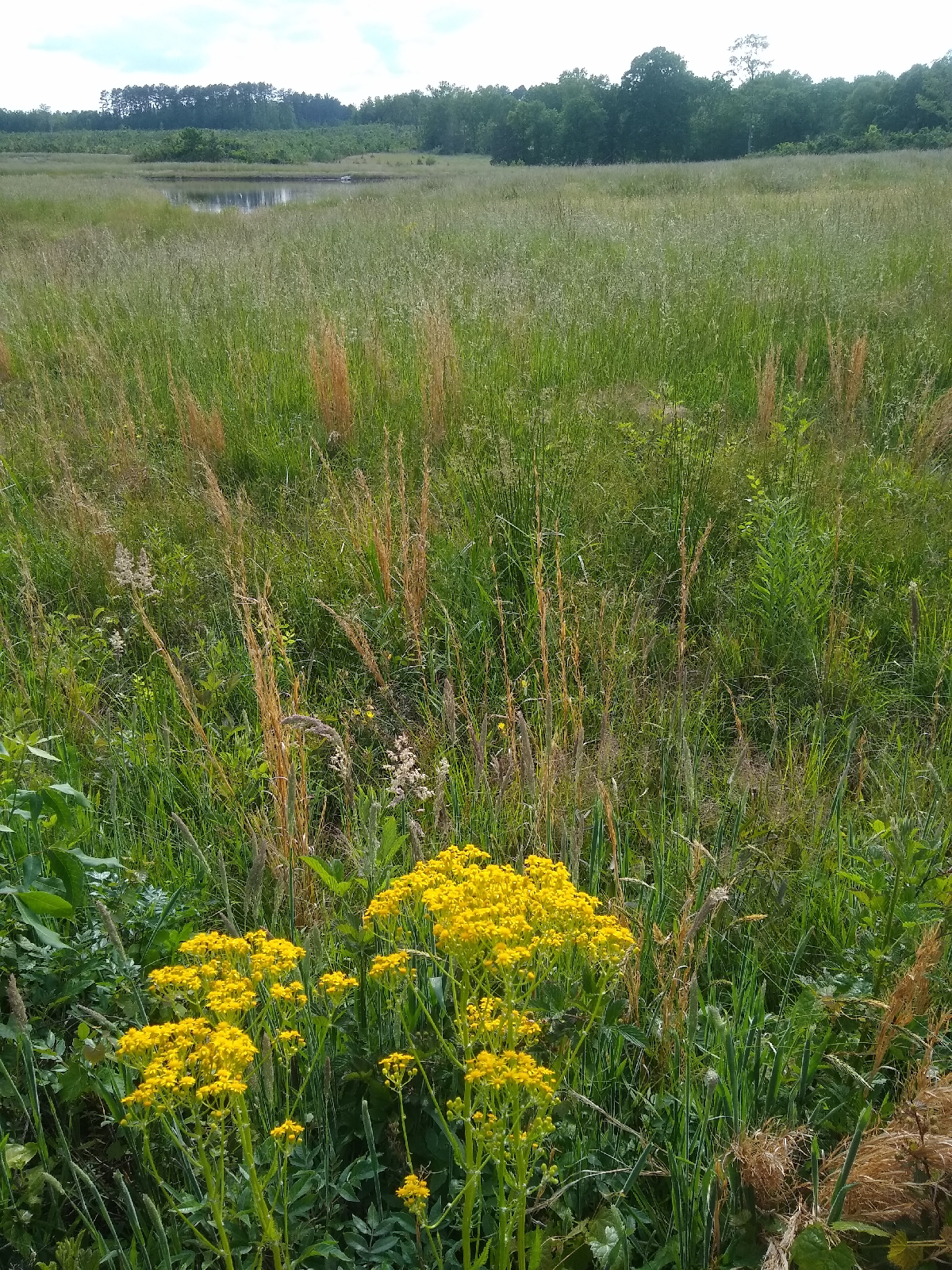 Her maternal grandfather, the Presbyterian minister, Rev. John McCamey Wilson, was not a dirt-poor, humble itinerent minister riding about the country on a donkey. He had been born in Mecklenburg County, North Carolina to a patriotic family and was related to Andrew Jackson. In fact, a young President Jackson and his mother had taken refuge with the Wilsons during the British Invasion of South Carolina. His early education had been  under the private instruction of Dr. Thomas Henderson of Charlotte, NC and he then went on to graduate with high honors from Hampden-Sydney College in Virginia. He furthered his education with a focus in Theology by apprenticing under a respected minister in Iredell County and afterwards served as a missionary to Western North Carolina for a period.


He would settle in as the pastor of Quaker Meadows Presbyterian Church in Burke County, NC, where he would meet his wife Mary, a daughter of the wealthy and illustrous Planter and Patriot, Alexander Erwin of Burke County.  The minister had to have impressed Colonel Erwin to such a degree to have earned the hand of his favorite daughter, a lady so beautiful her name has came down to us through history as "Pretty Polly".

The Wilsons would settle back east in Mecklenburg County to raise their family, among them a daughter named Margaret. As Margaret would grow up, one of the families 9 children, her father would be ministering in the Rocky River and Philadelphia congregations and teaching at the Rocky River Academy that he had established. Margaret would have been raised as a proper young southern lady of the early 19th Century. When he died, Rev. Wilson was also the owner of 7 Plantations with a large acreage. So when it came to choose a husband for his daughter, not just any old John or Thomas would do.

John, James and William Means had arrived in Mecklenburg County, North Carolina by 1779 and were from London originally. They settled on adjoining tracts on English Buffalo Creek and Coddle Creek, in an area that would soon become Cabarrus county and eventually purchase property on the "Head Branch of Rocky River on the Welsh Tract".  John Means was signer of the 1778 Petition.


By the early 1800's they had became an established and useful family of the area. John Works Had a son, William Melvin Means who married a girl, Isabella Catherine Works, from Iredell County, whose origins hailed from the Worke, Creswell and Baird familes of Chester and Lancaster Counties in Pennsylvania.

So by the time the educated Preacher's daughter, Margaret was of marriagiable age, a member of the Work - Means family, of whom he was likely very familiar, was deemed a suitable candidate.

John Work Means appears in history as more of a spoiled dandy than anything. He was not as industrious as his predecessors or those of his wife, Margaret. He loved to spend money instead of make it, so instead of increasing what he was born into, he sucked from it like a leach, and his family suffered.

By the time Rev. Wilson died, he deemed his son-in-law insolvent and put the welfare and inheritance of his daughter Margaret into the hands of her brothers.


"...that said Means in the lifetime of the testor became ? embarrassed insomuch that his property was on several occasions sold under debts?against him ...further complain that said Means is as they believe totally insolvent...
From the Will of Rev. John McCamey Wilson


This was 1931 and little Harriett Catherine Means would have been 6 when her grandfather died, the youngest daughter and 5th of 7 children. Harrietts life would grow tragic after that.

Despite John W. Means being called insolvent by his father-in-law, the 1840 census, he is shown as owning 7 slaves and an average amount of property. Not extremely wealthy, but not impovershed.

In 1848, he was still involved in lawsuits in Morganton. 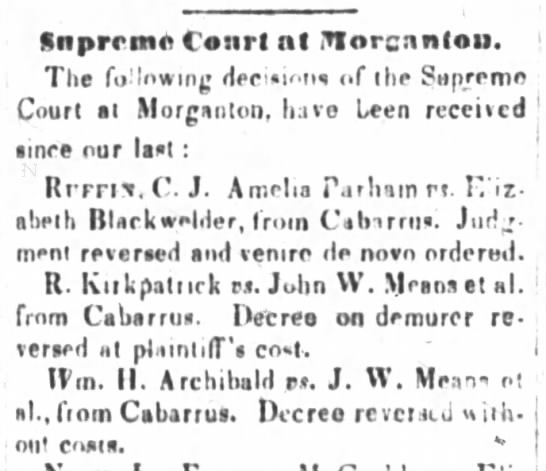 But by the 1850 census, Margaret had been declared insane. Harriett had given birth to her daughter Sarah out of wedlock, and only she and her baby brother, John McCamey Wilson Means, where still at home. I'm sure she was taking care of her mother, her daughter and seeing to the needs of the men in the home as well. A tough burden for a young woman.

John W. Means was working as a Ranger, and from one article, he was in his day a very strong man. 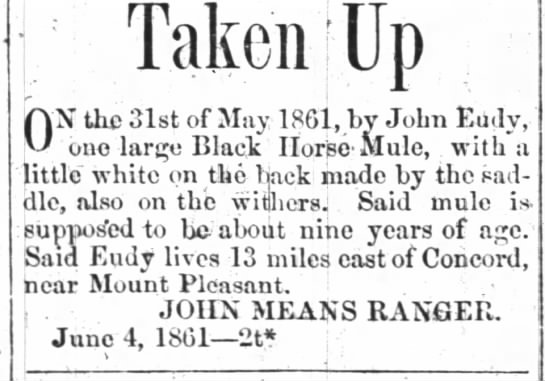 Despite her indescretion, Harriett married fairly well. John Q. Lemmonds was from the very patriotic Lemmonds family of Mecklenburg and Union County, a family full of red-haired Irishmen.

Either John Q. adopted Sarah Ann Catherine Means, or she informally took the Lemmonds name, because she went by Lemmonds after the marriage. Married in 1852, by 1860, Harriett had given birth to 4 more children.


13 year old Catherine is Sarah, Robert is my line,Jarvis either died before 1870, or it was a corruption of Charles. The 5 year old Catherine was Margaret, and the infant was either Charles or Absalom, who were both actually born before 1860 according to later records. I personally believe "Javis" was a scrawl of Charles and Infant Lemmond was Absalom.

By 1870, another 4 to 5 children (depending on if the 1860 "infant" was Charles or Absalom). The family had moved from Cabarrus County to Union County after the marriage. They raised their large brood in the community of Oak Grove in Goose Creek Township. 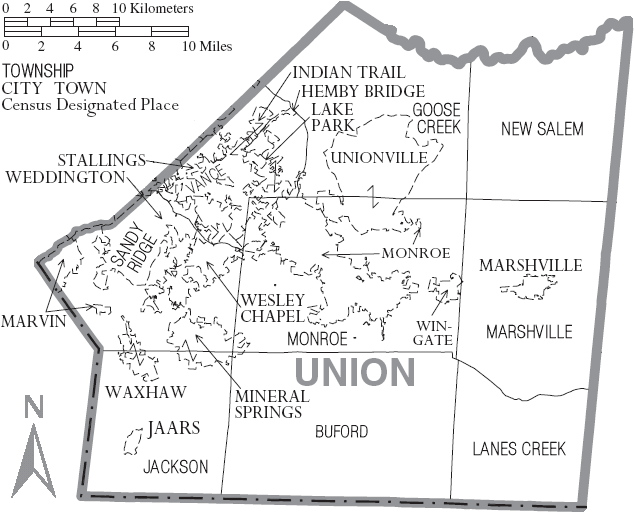 The 1870 census was the last for Harriett Catherine Mean Lemmonds. I do not know when she died or where she is buried. Most likely in Union County somewhere.

John is shown in the 1880 census with just sons Absalom and John Harvey living with him. There's no news of him after that. He may have lived until about 1890.
Harriett may have had a late, difficult pregnancy after John. I recently read more older mothers died of childbirth than younger ones, those in their late 30's or early 40's. Some hadn't had a child in a number of years and a surprise pregnancy at 43 did them in due to a higher risk of complications. I do not know. Harriett Catherine Means had been born into a wealthy, respected family. Her grandfathers and great grandfathers were all men of tremendous status and respect. Her father struggled, like to drink and gamble just a bit, but remained abover water in the end. Insanity befell her mother for unknown reasons and Harriett, the youngest daughter, remained in the home for awhile to help care for her. Harriett gave birth to a daughter out of wedlock, who was most likely the daughter of her eventual husband as the child took the Lemmonds name. She lived through the Civil War and she and her husband, John Q. Lemmonds, raised them on a small family farm in Goose Creek in Union County. She died sometime in her 40's. Harriet and John Q. were the parents of:
1847-1922 Sarah Ann Means-Lemmonds 1852-1892 Robert B Lemmonds1854 ? Javis Lemmonds  (possibly the same as Charles)1858 - bef 1870 Charles Lemmonds1859-1930 Absalom Brown Lemmonds1861-1905 Elizabeth Matidla Lemmonds1863-1885 Jane Rhea Lemmonds1864-1937 John Harvey Lemmonds
Happy Mothers Day Harriett!