Not just anyone could get their name in The Southern Christian Advocate. Published during the 1800's, the Advocate was the official publication for several southern states, including North and South Carolina, Alabama and Georgia. Marriages, deaths and births were sometimes reported to the Advocate and the reporters were Ministers and Pastors, reporting on the lives of their parishoners, and primarily, the most reputable or prominant ones. That made the news.


Martha Palmer Davis was my 3rd Great Grandmother. I wish the newspaper would have reported what she died of, leaving them so young. Born in Stanly County, or what would become Stanly County, she was the daughter of James Palmer and Martha Atkins Palmer, who lived along the Salisbury Road north of Albemarle. About 1834, she became the second wife of Henry Davis, oldest son of Job Davis and 5th child of Sarah Winfield Davis. I've previously posted about Patsy Atkins Palmer and Sarah Winfield Howell Davis. 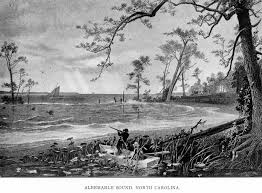 Henry grew up on the Rocky River. About the time he married Martha, he was preaching and conducting some real estate deals, all the time while operating a plantation near the river. He was a big proponant of splitting Montgomery County into two counties, so by the late 1830's, when a new county seat of a new county was being planned, he bought property on Cloverfork Creek to be nearer to town, as he was taking part in its founding. Today, that property is within the city limits of Albemarle.

This put Martha closer to her parents and siblings.


Martha appears in two censuses, the 1850, where thier closest neighbors were Henry Marshall, Zack Wallace, Edmund Nash and a Mrs. Hinson.

The 9 children of Henry and Martha Davis were;


It is unknown where she is buried, but speculations have been either at Kendall Valley, where her parents are or  at Prospect Baptist Church.

Happy Mother's Day, Martha. I would have liked to have known you.