David grew up in the Frog Pond/Big Lick  area of Stanly County, judging from his father's 1868 Homestead Claim on land deeded by his wife Ellen's grandfather, John T. Honeycutt.  It's found on the above map just southwest of the Red Dot of  Albemarle, the county seat.

He seems to have lived a calm, and peaceful life as a farmer, full of the hard work that befell any small farmer of the era. At the age of 22, he married a girl from the same area, Ellen Honeycutt. Ellen was the eldest daughter of Charles McKinley "Ken" Honeycutt and Mary Anna Burris Honeycutt. Both David and Ellen were Great Grandchildren of old Solomon the First. There were several intermarriages  between his many descendants.

Ellen was only 17 that late November day in 1873. They may have gotten married at Liberty Hill, located near to where they lived. Her mother had died the year before and Ellen may have been in a hurry to get out of careing for her younger siblings and strike out on her own.

The 1880 census was the first one that David and Ellen show up in as a couple. Their 7 years of marriage had produced 4 children.

By 1900, twenty years later, all of David and Ellen's children had been born. Rowena was already married with a family of her own, and Mack married that year to Eve Almond. Tina, or "Teeny", had been married for 4 years to James M. "Merman" Lambert and already had 4 children. All the rest had been enumerated with their parents.

The names were not transcribed well, as Burris was misspelled Buroce, Duncan was Dunkan, Sue was NOT Sue but Lou, Mettie was short for Elmetta, Hemley was actually Hurley, Vinius was Venus, and the second Sue was Lula.

Then, sometime between 1900 and 1910, David and Ellen moved their family to Cabarrus County and were found in Concord on Powder Street. David and his two teenaged children were working in the Cotton Mills, while Ellen was a homemaker. Ellen was very fortunate for a woman of her era, having given birth to 10 children, and upon the approach of her 60th birthday, having all 10 of those children to survive.

Powder Street runs parallel to Irish Buffalo Creek, and intersects both Corban Street and Cabarrus Avenue, two main throughfares of turn-of-the-century Concord. It's only 3 blocks from Barber-Scotia College, but was not a collegiate area. Surving houses of that era appear to be Mill Hill style cottages. 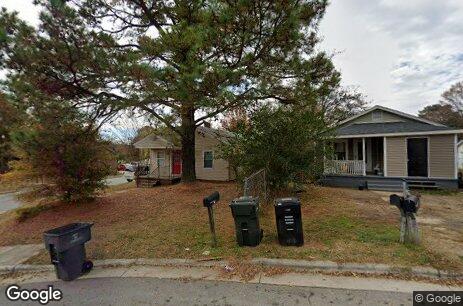 Ten years later, David, now 71 years old, was still working in the Cotton Mills. He and Ellen were now living on Railroad Street, with son Venice or Venus Odell Burris, his wife Mandy and their baby son Will. Railroad Street was in the very center of the Concord Textile Mill area and the Gibson Mill village. David T Burris passed away on December 11, 1928 in Big Lick, Stanly County. Sometime after 1920, he had left the Cabarrus County cotton mills and returned home. He died of the flu and pneumonia and was buried at Bear Creek with many of his kin. His death certificate recorded that he was 83 years and 10 months old.

Ellen would move in with her daughter Tiney Burris Lambert in the Ridenhour area of Stanly County, which is the northern end of the county.  She did not live long after her last census was taken and joined David at Bear Creek Cemetery before the end of the year. Her death certificate lists her cause of death as simply "Old Age" with no doctor in attendance and her age given as 84 years, 1 month and 13 days.

The 10 children of David T and Ellen Honeycutt Burris were:

All of their children had at least one child, leading to a great number of Grandchildren, Great Grandchildren and onward.