Bridget Smith.  I had never heard of her, but she's my ancestor.

Gedmatch.com has started a new project called "Ancestor Projects". It's genealogical studies of a certian group of persons, families, tribes, countries, certain parts of countries, immigrants from a certain area or to a certain area. You get the picture. I've joined several that apply, or may apply, to me.

One I've just joined is the Duke Project. I know I am descended from James Duke who lived near the current town of Norwood, NC and is buried right across the road from my cousins house. His daughter, Elizabeth married Calvin Lee and from there, I can take one easily down the old family tree to myself. I had seen where someone had Old James Duke as the son of a Robert Duke and wife Isabell Vinson. That's as far as I had ever gotten.

However, today, one of the administrators from the Duke Project  interjected the parents of Robert Duke into my line, and his wife, Bridget Smith.

This is all I know about Bridget. She was born about 1674 in Isle of Wight, Virginia. She married John Duke II, date unknown.

She had 3 sons: Robert, John III and Benjamin.

They rented property from William Boddie.

They later purchased the land from William Boddie. 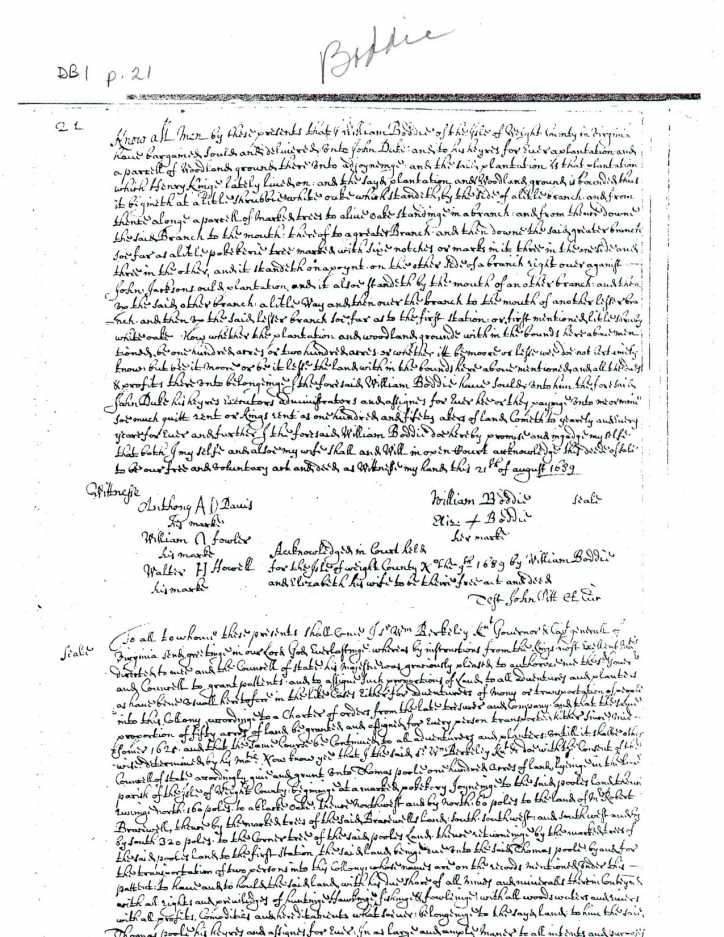 He sold land that had belonged to his father, John Duke Sr. Bridget signed the document and Elizabeth Mercer was his mother, having remarried after his father's death.


Know all men by these presents that I John Duke of the County of Isle of Wight (planter) have my
in hand already (returned) (satisfaction) to the value of three thousand pounds of tobacco and Coffe? de?y
These presents acknowledge to have sold and made sale unto John Burnett (Shoemaker?) of the same county.
A parcell of Land Containing fifty acres or thereabouts which land my father John Duke deceased for-
merly bought of Jeremiah Rutter of (Chuckatuck) (then) in Nansimund County (being) out of a pattent of (three)
hundred acres lyinge and bounding betwene the land of John (Gossling) and the house of my father John -
Duke whene he was then situated with said land I the said John Duke doe acknowledge to have So(u)ld
(u)nto the above said John Burnett for ever with all right profitts Comodities and hereditaments whatsoever
there (Contd) belonginge: and that free and cleare, and freely and clearely defend keepe harmelesse: the said
Burnett from all or all manir of psons that shall lay claim or claime any right title or intrest to the
above mentioned fifty acres of land but the same to hould and injoy for ever with he the said John Bur-
nett: his heirs Executors administrators: or assignes according to the tenor of my father Duke deceased,
Conveyance forfieth and to the true permormance hereof I the said Jno Duke doe (do) auknowledge to have
Sett my hand and Seale this 23rd of Sept. 1689
Signed Sealed and delivered   I Elizabeth Mercer doe: freely Consent with
with presents of as               my Sone John Duke to this bill of Sale as written by
Will Bradshaw                  My hand and seale the day and year above written
Signed
Rich(ard) R Bealle    Awknowledged in open Court held for the Isle of Wight
(Mark)         County by John Duke  Eliz(a) Mercer & Bridgette Duke to be
(act) and deed and ordered & Recorded   Test. John Pitt CC

John and Bridget may have lived near the Cypress Swamps. She may have been the daughter of Arthur Smith who had a land grant near the Duck (Duke) grant. 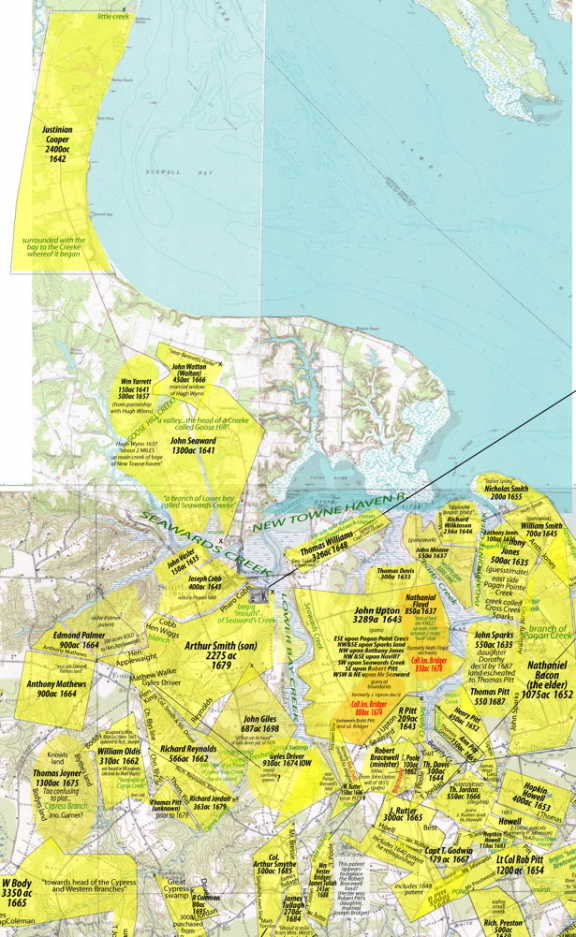 John Duke died March 16, 1719. His probate records referred to him as "John Duckes". His property was appraised by Ambrose Adley, Timother Tyens and Jeremiah Fly. It was signed by Bridget Duckes and ordered Feb. 27, 1720. So she could sign her name.

It appears she married a Jackson after she was widowed.

Her sons and Grandsons would become Patriots.

Posted by Jobs Children at 4:56 PM