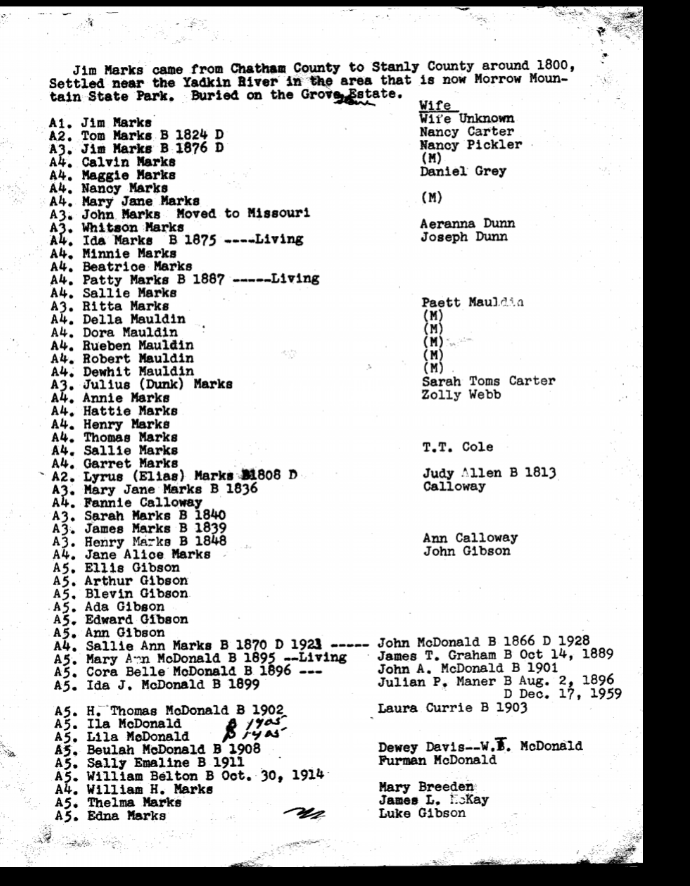 Recently my distant cousin and fellow Marks descendant, Cyndi, sent me the following page from a bulletin she had been fortunate to find. The bulletin was from a Marks family reunion and was shared with her by a Marks descendant whose last name is Marks. It basically is a listing of the most immediate descendants of James Marks. I never knew there were Marks family reunions, because I descend from his oldest daughter, Tabitha. Cyndi didn't know because she descends from his brother. The family reunion appears to have just been held by descendants of one or more of his sons.

James Marks was from Chatham County, which I was a fact I never knew, until I made contact with Cyndi, but apparently there were descendants of his who did. He moved to Montgomery County in the 1820's, on the side of the river that became Stanly. His brother John was here also. But James did live here long before passing away. However, he left a wife and 5 children. And here we are.

The top part of the bulletin was pure genealogical treasure, however. It included something we did not know.

"Settled near  the  Yadkin River in the area that is now Morrow Mountain State Park. Buried on the Grove Estate."

I'd never heard where he was, or might have been buried.

James died before 1830, because in the 1830 census for Montgomery County,  his wife Caty is shown as Head of Household, which for women, usually meant they were widows.

He had married Catherine "Caty" Gunther, daughter of Isham Gunther of Chatham County. Her sister, Mary, had married John Marks .

Caty is shown with 4 children in 1830. Their oldest daughter, Tabitha, born in 1805, had already married with two little girls. She had married a minister, Rev. William Solomon, who had a familial and long-time association with both Ebenezer Baptist Church in present day Badin, and Stony Hill Methodist Church, near Morrow Mountain. (The Stony Hill congregation had begun as Baptists).

Now having a hint at where James Marks was buried, a task was to hand. Where was the Groves Estate?

With a little research, I found two possibilities, First, I knew there was a Christmas Tree Farm near Morrow Mountain called "Grovestone". I also searched old newspapers for the mention of a "Groves Estate" and this is what I found.

James Alonzo Groves was born in 1873 in Gastonia to the affluent family of Robert A. Groves and wife Margaret Waddell. He was well-educated, well-connected and arrived in Stanly County in 1903 in Association with Wiscassett Mills.  Below he is shown as a boarder in the 1910 census of Albemarle, North Carolina. 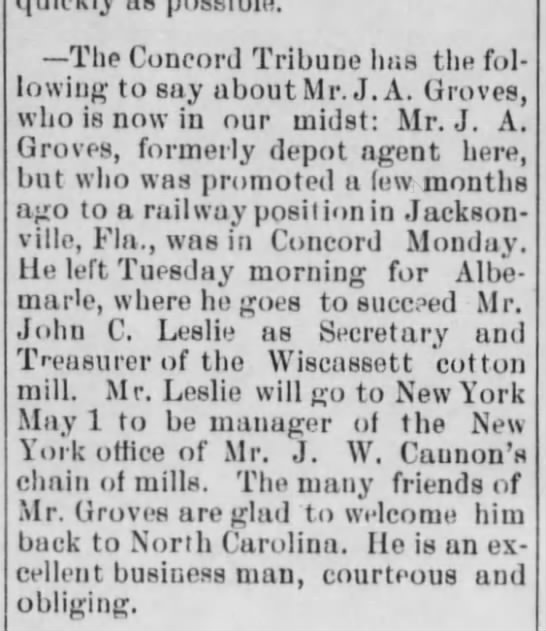 
J. A. Groves moved quickly up the ranks at Wiscassett Mills and within Albemarle society, where he met and married a local girl, Sarah Ellen "Nelle" Hearne. Nelle was the daughter of Sidney H. Hearne and his wife Ellen. The Hearnes were the founding family of Albemarle, the town literally built on the Hearne plantation, and were scions of Albemarel society. 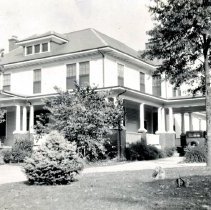 The Groves House in town was located on North Second Street in Albemarle, across from Franklin Street. It has since been demolished.
The Groves had a house in town, but Nelle loved horses and J. A. loved Nell. He purchased 1300 acres in the area between Morrow Mountain and Stony Mountain and there built a weekend getaway house, a place for Nell to ride her horses and have parties.


The property where they built the weekend house was called 'The Groves Estate".  At first, I wasn't sure if the Groves Estate and Grovestone was the same place. So I called the current owners and spoke with a Mr. Talbert. He was so very cordial and informative. Yes, Grovestone was indeed part of the Groves Estate.Mr. Talbert had been informed somewhat on the history of the property somewhat when he purchased it. The story was that Mrs. Groves had gotten ill and was sent to a sanitorium out west to recover. Before her return, Mr. Groves had built the getaway house as a gift for her.He explained about various caretakers houses that were also on the property and later occupied by Kirks and Spiveys. A stable had been built there for the horses. It had been a magnificent place, parties on the weekends for the Stanly elite and vistors from Gaston and Mecklenburg counties would show up.I have explained to Mr. Talbert who I was and what my interest was, and about the bulletin that stated that my ancestor, James Marks, had been buried on the Groves Estate.
That is when Mr. Talbert remembered a group of people who had came to his place in about the mid-1980's. He said they brought flowers to put on a grave, and that they knew exactly where the grave was. These were Marks descendants and the grave was that of James Marks.Mr. Talbert so graciously  offered to give me, and my cousin, a tour of the place, anytime. We took him up on his offer.

So a few short weeks after I spoke to Mr. Talbert on the phone, we touched base a few times and  set a time to meet. So myself and two other Marks family researchers, Cyndia and Leah met with Mr. Talbert for a tour of the former Groves Estate with the high hopes of discovering where James Marks had been buried.

Mr Talbert was able to provide some background on the estate and show us where certain fixtures once were, and where others still were. Remnants of an old road can still be seen crossing the property. A springhead at the bottom of the hill from the house still bubbles, and obviously where ancient residents of the property once got their water.

Mr. Talbert provided us with blueprints, and maps of the property, along with the above photo of Mr. and Mrs. Groves and several of the Rock House and the view from the front porch of it from many decades ago.

Knowing that the Rock House was built over an existing structure of much older origin, I wondered who had lived in the original cabin. As James Marks grave was on this property, could the structure have existed back that far? Or had some more recent Marks descendants lived there. In searching land deeds in Stanly County, I came across an unusual phenomena. Stanly County was formed in 1841 from the West half of Montgomery County, using the Yadkin-Pee Dee River as the dividing line. There are no deeds in Stanly County involving the Marks family until 1875. This is a space of 34 years, and in this deed, W. A. Marks, a grandson of James Marks, sells property to Dupree Clodfelter, who hailed from Davidson County.


Now, in present day, Clodfelter Road comes off of Valley Drive and heads up the hill to the top of a ridge between Morrow Mountain State Park and Stony Mountain. The road goes through the Groves Estate. While the current Grovestone is only on one side of the road, the original Groves Estate covered 1300 acres. A road that leads to Stony Hill Church veres off of Clodfelter Road to the left coming up. At the top of the hill is a community known as Clodfelter Town where descendants of Dupree Clodfelter still live. It's no longer a town, but it is still populated and still lies in the shadow of Morrow Mountain. 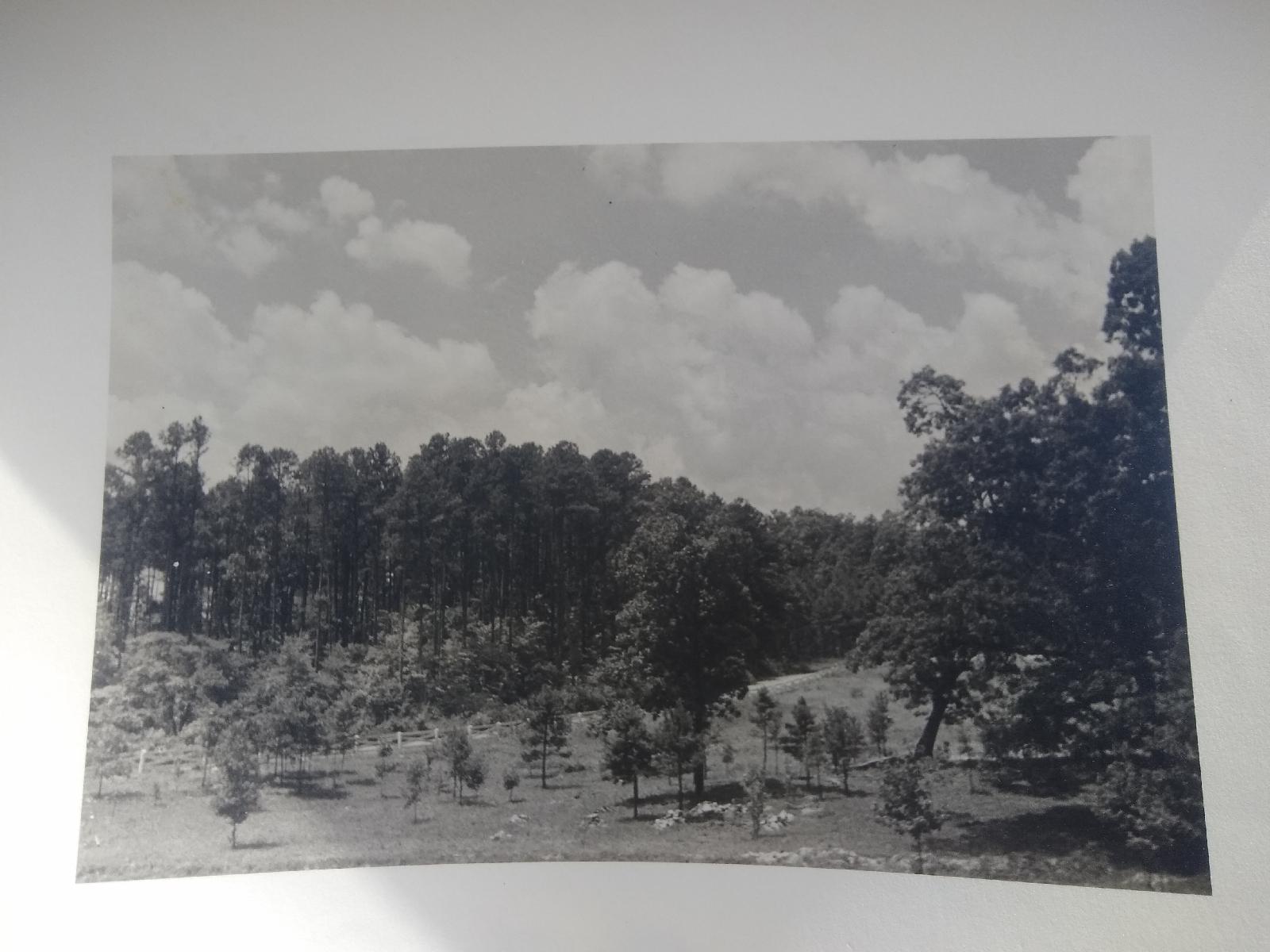 Could the property that W. A. Marks sold to Dupree Clodfelter, the progenitor of the Clodfelter family, be where Clodfelter Town sits today? It appears so. And if W. A. Marks sold it in 1875, how and when did he acquire it? There are no records of W. A. Marks buying it before then. Whitson A. Marks was the son of Thomas Marks and wife Nancy Carter. Tom was the youngest son of James Marks and Catherine Gunter Marks. Whitson was born in 1849, so he did not yet exist in 1841 when Stanly became a county. The property was obviously acquired before 1841, when the county was still part of Montgomery, but not by Whitson Marks. How then did he acquire it? I can only feel it was by inheritance. 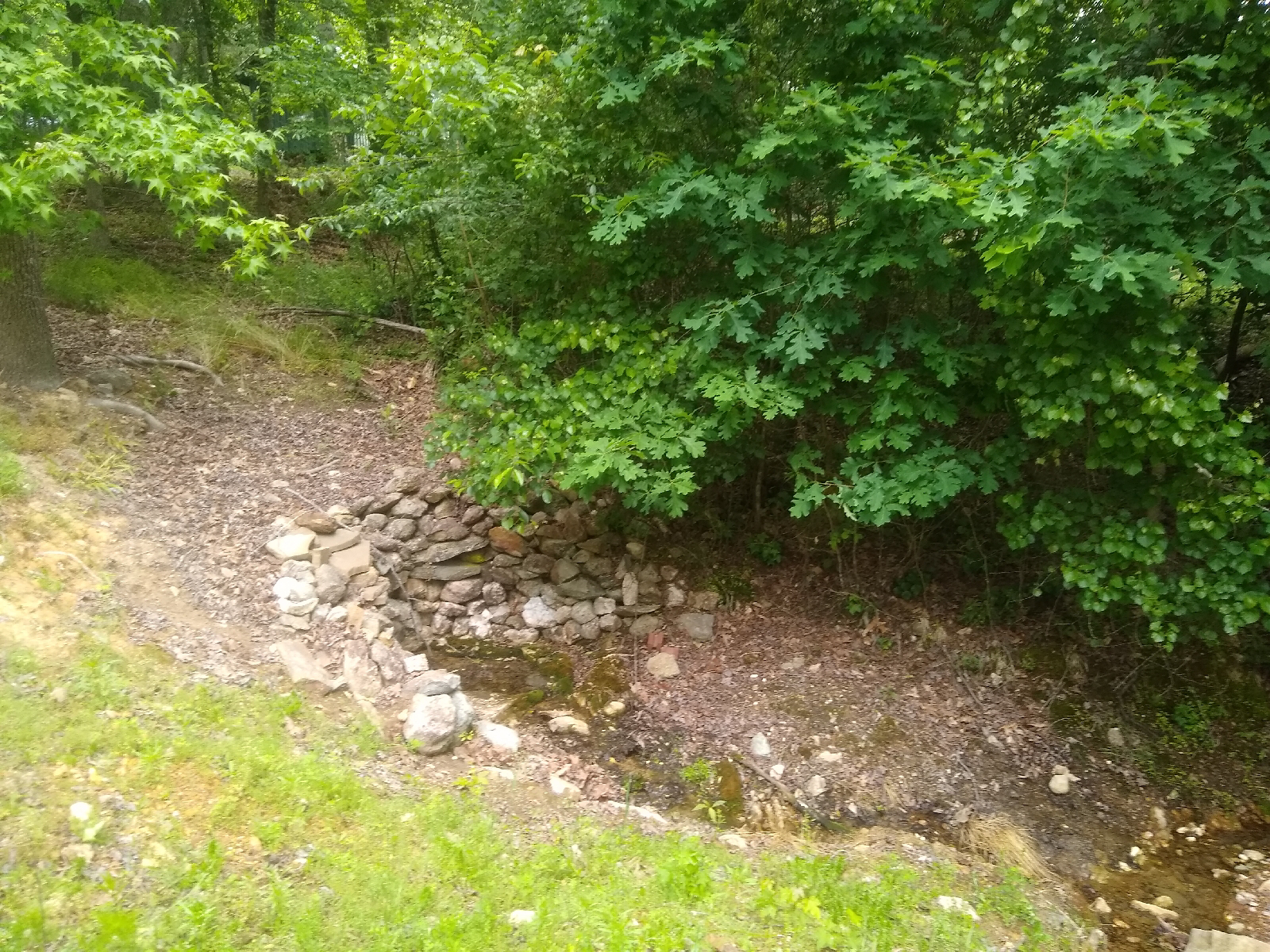 Another interesting fact is that in the book, "These Hallowed Grounds", published in 2012 by The Stanly County Genealogical Society, a year before I joined, is the mention of a cemetery, located on the property just across Clodfelter Road from Grovestone.

I spoke to a member of the SCGS who had been on the adventure of discovery in locating the old cemetery. It is quite a walk from the house and off to toward the end of what is now Dunlap Road, below the west side of Stony Mountain. Still, not that far from where James Marks grave is supposed to be. The procession was led by Rayvon Shepherd, a descendant of Tom Shepherd, Grandson of Nancy Marks Carter, James Marks youngest daughter. Tom Shepherd lived in this area years ago. The cemetery is believed to be a Marks cemetery. And not far from the area of James Marks Grave!

It's not hard to imagine the original cabin, sitting atop the hill where the Rock House now stands, and looking out toward the property where the other Marks cemetery is said to be. Was this area inhabited by the Marks family, spread out with the view of Morrow Mountain in the distance and Stony Mountain in the other direction?

We will have to back in the winter if Mr. Talbert so allows, with someone who knows the art of divining, to help us pinpoint James Marks exact grave. At this time, we don't know for sure if the stone covered mound is it or not. Mr. Talbert said he felt it was a little further up the hill, closer to the house. 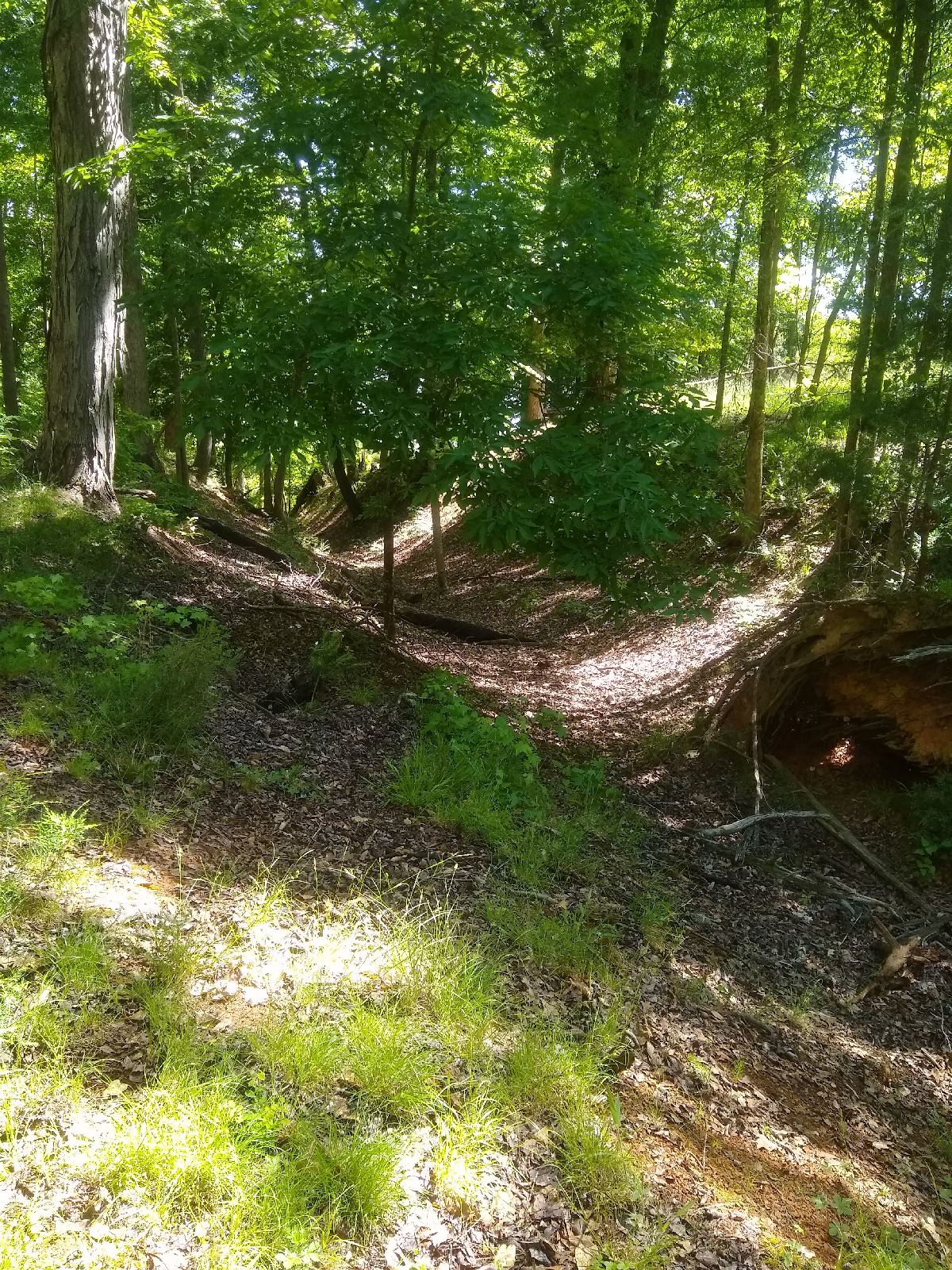 The old road went right by the house, right across the front yard, above is the picture of the road bed going from the property south. Many of these old places that seem out in the middle of nowhere, were actually located on the byways of the day. 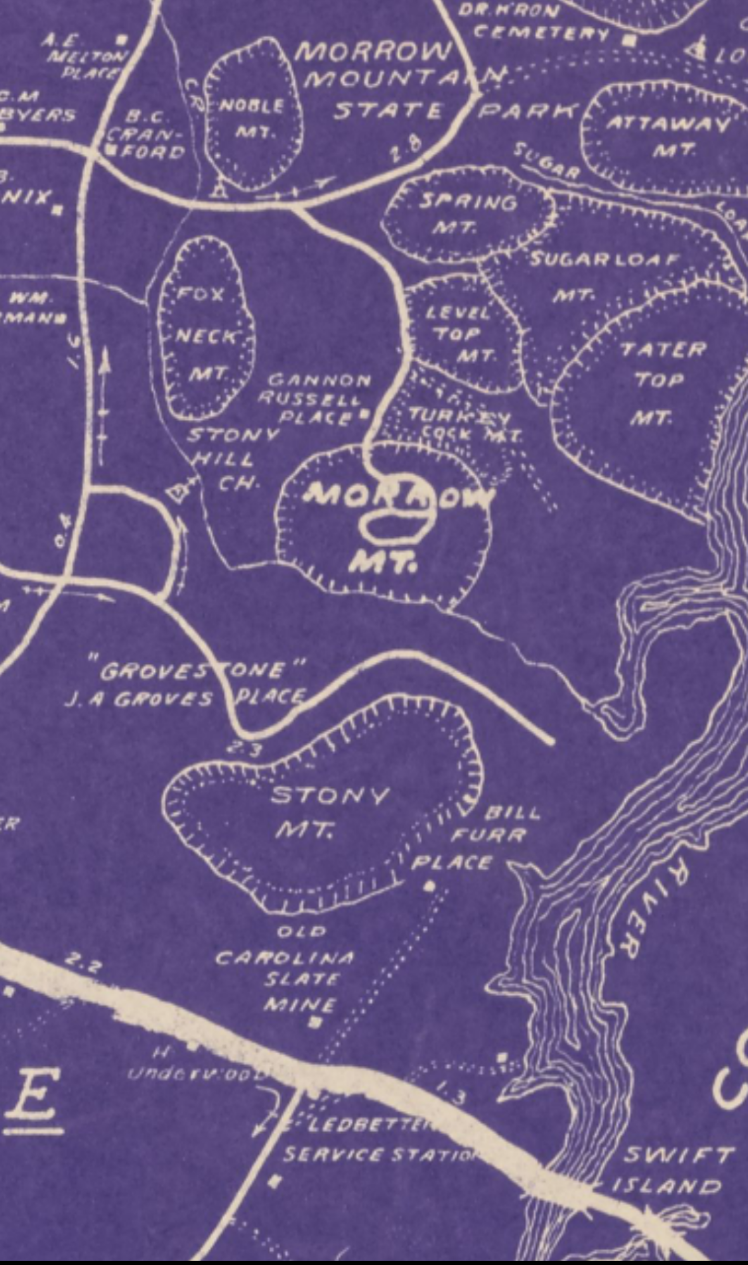 The above is a clip from an old map of Stanly County. Just above Stony Mountain you can see '"Grovestone" J. A. Groves Place'. A little beyond, on the 'loop' road is Stony Hill Church. The below clip picks up a little north of the first one In this map, you can see where the Kron Place was, and Lowder's Ferry.  The map identify's an area as Morrow Mountain State Park, but with just a dirt road, or path to the old Ferry, which is now a road that goes past the campgrounds and leads down to the boat landing and canoe rentals . 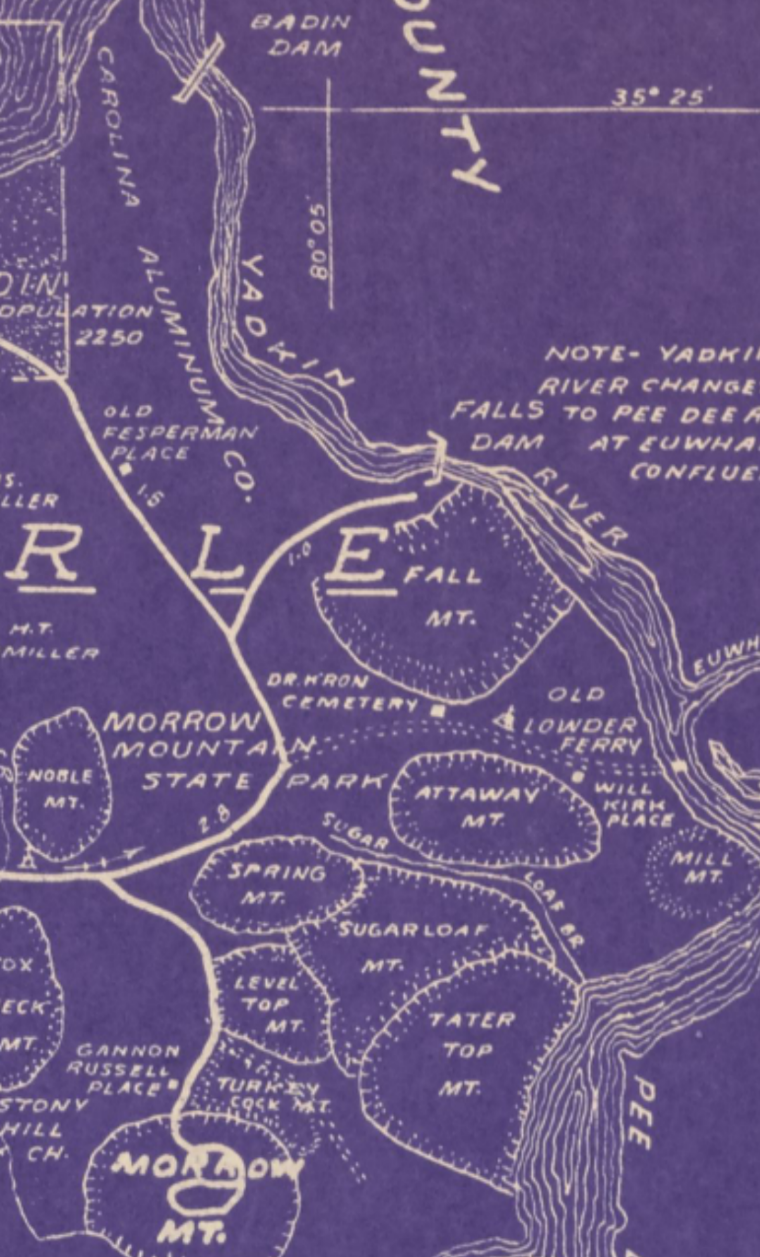 All in all, we had quite a day and was blessed by Mr. Talberts hospitality and knowledge. I believe we have found the general are where the Marks lived when they settled here. Hopefully, by tracing J. A. Marks purchase of the property backwards, we can find if it does trace back to the Marks.

Special thanks for information, the tour and other assitance to Mr. and Mrs. Jerry Talbert, Cynthia Gordon, Leah Morris, Greg Marks, Phil W. Lowder and the other owners of portions of Grovestone, whose names I do not know who gave Mr. Talbert the okay to take us trapsing across their property.

Posted by Jobs Children at 6:29 PM