Tristram was a Knight of Arthurian legend. The name Tristram also had a brief career as a trendy name in mid-ninteenth century Richmond and Southern Anson Counties, North Carolina. So how does that fact feed into my research of the Jacob and Hannah Sheppard Ford family?

The elderly Hannah Ford, who lived to be 100 years old and passed away in 1914 in Richmond County, NC, was steadfast in the fact that in 1900 and 1910, that she had 8 living children, and had been the mother of 11 children altogether. A mother would know her children. I could put names to the three deceased children. Her son, George Ford, had passed away in the Civil War, her daughter Agnes or "Aggie" Ford had married Pleasant Paul and had a couple of kids, passing away before he remarried. Lastly, her daughter Chaney also had passed from records prior to 1900. Yet, as for the living, there was that one Number Eight missing.

I found Trstram thanks to his nephew, John Monroe Ford, son of Solomon and Martha Ford, Jacob and Hannah's oldest son.

Hannah Sheppard Ford had apparently been weak in body, but strong in mind at the turn of the century. Born in 1814 to Thomas Sheppard of Anson and Richmond Counties, this lady had seen a lot and a lot of change, in her days. While researching her family, I had discovered that due to errors caused in different decades by different census takers, descendants had her family tree all discomboluated. One error was that in the 1900 census, the census taker had misnamed her son, Thomas and had given him the name of his brother Solomon. As in the huge jump between 1880 and 1900, where there was no census due to the burning of the 1890, Thomas had added several children to his family. Solomon was a good bit older than Thomas and both had married women named Martha. Solomon's Martha was much older than he and Thomas's Martha was of nearer his own age. The two Martha's had been a confusing issue as well. Because of those two facts, many of Thomas's children had been attributed to Solomon instead of Thomas.

Solomon was in the 1900 census too, the real Solomon, but as his Martha had died in the interim, he had remarried, and was living happily with his second wife, Eliza. To top that off, Solomon's youngest son had married one of Thomas's daughters, and had been at his uncles house when the census taker came by. He was counted there, but on a different day, when the census taker came by his father's house, this son, Robert, was also counted there as well.

I wondered if Robert may have been the source of the whole 1900 mix up. Had he been there to visit his cousin Carrie, whom he obviously had eyes for, and maybe Thomas had been in the fields? The census taker asked him what his father's name was, and the 19 year old Robert answered "Solomon"? It could have happened that way.

It was the 1880 census that gave us the name of the 8th Ford, however. Solomon, who was the father of 4 sons, had one named John Monroe Ford, his eldest, and in 1880, John Monroe Ford, like his youngest brother Robert in 1900, was visiting, or staying with, an uncle.

Tristram (or Tristan) Ford was living in Harleeville, in Marion County, South Carolina in 1880, and there, when researching Solomon's children, I found his nephew, John Monroe Ford.

All of Jacob and Hannah Ford's real children had been missed in the 1850 census, but Tristram had missed more than most. In fact, Tristram doesn't show up in records, at least in his real name, until the Civil War. Like his brothers Solomon, George and Thomas, Tristram also served. He was in the same company as George, but unlike George, although wounded, he had survived.

And certainly enough, Tristram was from Richmond County, North Carolina. I had the right John M. Ford and had found Hannah's missing living child. Tristram had enlisted at only 18, and had a lengthy and eventful career in the War. He had enlisted on the last day of 1861 in Company E, 38th Infantry. Two years later, he had been imprisoned in Falling Waters, Maryland, two years after that, in 1865, he was imprisoned in Appomattox River, Virginia. Prison life was as deadly as battle. For the young man to have survived these four years of hell, he was made of some tough material. Having seen more of the world than which he had been accustomed to in Richmond County may have attributed to his move to South Carolina.

No correlation at all. Although both lists include an 11, 7, 5 and 2 year old, the genders and the children in between don't match in any way. Where had the census taker gotten these random children? And if the children in the 1860 census had all been born since 1850, one might say that a tragic illness could have taken out all of the older children, but No. Here were 6 children born before 1850, who should have been named in the household.

Jacob and Hannah had a train of daughters born during the 1850's: Betsy, Martha Jane, Agnes, Chaney and Sally and Beadie was married in 1849, and with her husband in 1850, so there's your 11. The verdict isn't completely in on Beadie yet, however, there was only ONE Ford family in Richmond County at this time.

Before the 1880 census, I can't find Tristram in Richmond County, NC, but this Agricultural Schedule for 1870 in Marion County, South Carolina, where we know he lived for awhile, may have captured him. 1870 was the year he probably married Adaline.

Adaline E. Stanton was the daughter of James W. Stanton and wife, Annie McDaniel Stanton. She was the oldest of three children and had grown up in  Marion County, South Carolina.  Below is the family unit in 1860.

Her mother passed away before 1870, and neither Adeline or her husband Tristram can be found in the 1870 census, but her father is found in Red Bluff, Marlboro County, South Carolina, which is just below the NC/ SC state line. 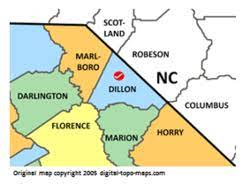 Tristram and Adeline seem to have led a very quiet life, and had no biological children. They adopted a little girl named Mary Margaret aka "Mollie", born in 1883. She could have very well been a biological neice. The 1900 census has the family living in Harleesville and states they were married in 1870, for a period of 30 years. Adeline was the mother of 0 children with 0 living, so was probably barren. Tristram was shown with the nickname "Trussie", which was the name of one of his sister, Martha Jane's children, who was obviously named for the older Tristram. 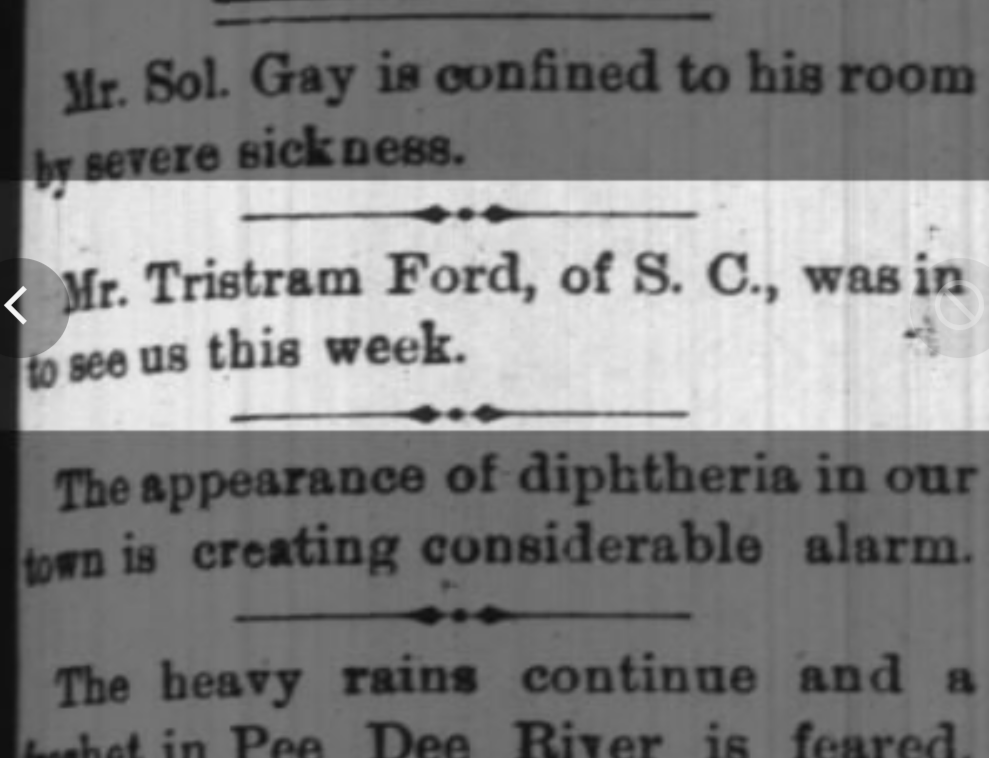 It had been reported in the Rockingham, Richmond County, NC newspaper that Tritram had been up for a visit in 1891.

They were still in Harleeville in 1910, and now Adeline's elderly aunt, Charlotte, was living with them. She was the sister of Adeline's mother, Anne. The street they lived on had no name, but was given as the "road leading to Little Rock Road". 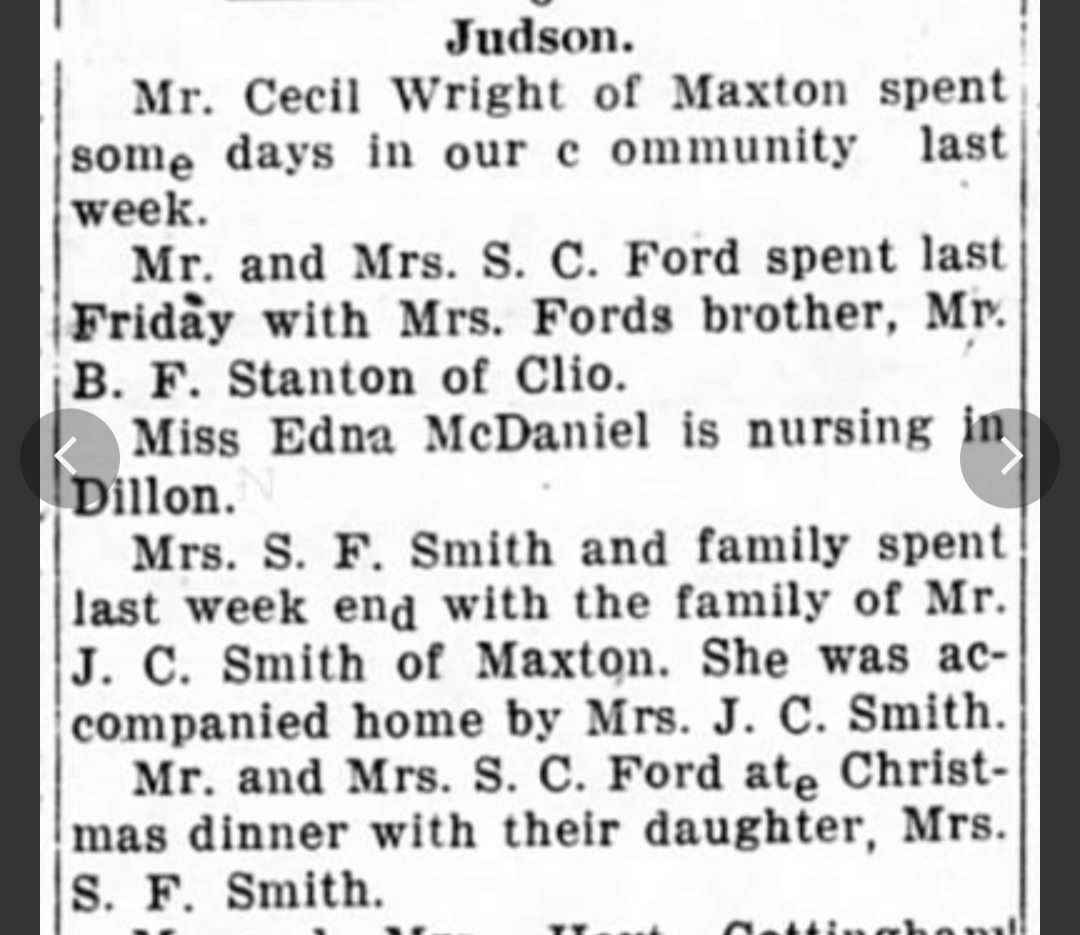 1920 was the last census for Tristram and Adeline. They were still in Harleesville and waiting out their last years alone. 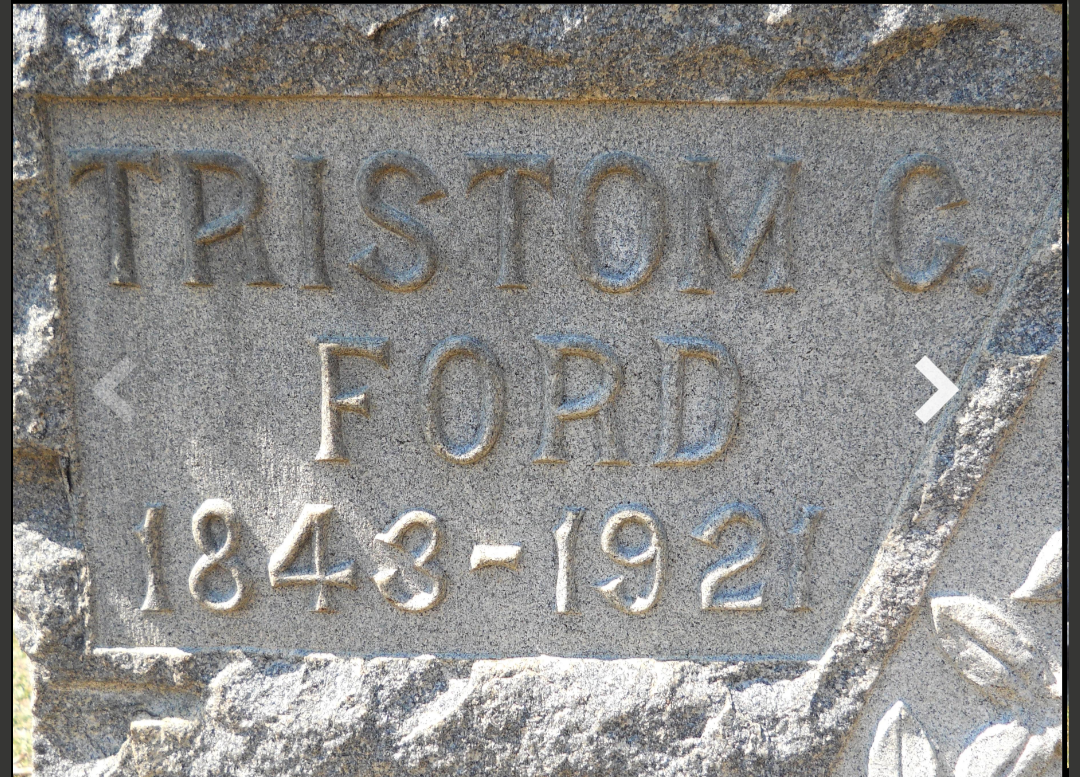 Tristram Ford, the missing child of Jacob and Hannah Sheppard Ford, passed away in 1921 at the age of  78. His wife, Adeline followed him in 1927. They are buried at the Carolina's Presbyterian Church in Dillon County, South Carolina.

Tristram and Adeline's only child, Mollie, was widowed in 1919. She never remarried. She lived for awhile in Monroe, in Union County, North Carolina and then moved to Charlotte in Mecklenburg, NC. She lastly lived in Myrtle Beach, in Horry County, North Carolina. There, she passed away in 1966.

Posted by Jobs Children at 3:55 PM No comments: