Ava McGregor Solomon is another of my Scottish predecessors and my 5th Great Grandmother. 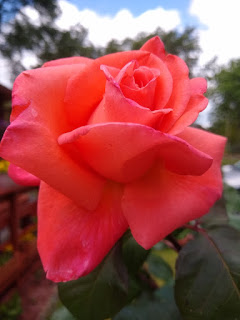 Ava was the daughter of "The Olde Scots Preacher", Rev. William McGregor, pastor of Mouth of Uwharrie Baptist Church.

Ava was probably the first of his children born in what is now Stanly County, North Carolina. Rev. McGregor bought a tract of land from Henry Mounger in 1778 in Anson County. The property was located 'at the Mouth of Attaway Branch'. This property is in what is now Stanly County. The area would become part of Montgomery just one year later, in 1779, and not a part of Stanly until 1841, long after Rev. McGregor had passed and Ava had migrated away.
Subsequent land transactions would be recorded in Montgomery County, in 1780-1782, he acquired 500 acres. I see many researchers assuming he had moved from one county to the other, when in fact, he had not. He remained on Attaway Hill.
William McGregor was said by Dr. Francis Kron to come from Ossian's Glen. Other research notes him to have been born near Perth, an Ulster Scot. Ossian was a legendary Scottish bard and Kron was probably referring to the poetic mentions of the lovely domain in works published by James McPherson credited to Ossian.

Ava's father, William McGregor first shows up in the 1771 Tax Listing for Butte County and is mentioned in the 1774 meeting of the Kehuky Baptist Association.

There were more than one William McGregor in area of Northeast North Carolina and one is thought to be the father of William McGregor. A William McGregor was in Warwick County, Virginia prior to moving to Northampton County, NC. This one bought land from a James Dancy. They were close to the Huckabee/Huckaby family and the Solomon family, into whom Ava would marry, were also from the same general area. One branch of Solomons born in Montgomery (Stanly) County, had a close connection to the Dancy's and I've been trying to connect the dots on that one for years.

So Ava's family had chosen a hilly area beside the Yadkin River that reminded the Preacher of his homeland to raise their family. The property of Rev. McGregor was sold to Prussian Physician, Dr. Francis Kron, and the cabin has been reconstructed and preserved in Morrow Mountain State Park.

Not too far behind it, a short trek over small hills, is the gravesite of Rev. McGregor. This is where Ava grew up.

The general concensus among researchers is that Ava's mother was named Sarah, although her maiden name is up for debate. Mostly accepted is that she was a Flowers and the sister of Mary Flowers who married John McGregor, thought to be the brother of Rev. William McGregor.  I do not want to argue the McGregor origins, just to honor Ava, however.

I do know that at one time, however, it was dangerous, and downright forbidden, to be a McGregor.

There was a long, on-going feud between the McGregors of Glenstrae and the Campbells of Glenarchy. The University of Edinbourough site notes that the feud was intense because the two clans had had close ties. "Marriage alliances had cemented the link between the MacGregors, the Campbells and other Argyll Kindreds."

On April 3, 1603, the crown made the following declaration: " Under the Prosciptive Acts of Clan Gregor, which came into force....the name MacGregor was 'altogether abolished, bearing the McGregor name was punishible by death."

This decree remained in force for 60 years and many Scots took refuge in Ireland. The name switched to McGheeHee in several factions and times. A leader of the Clan, Allaster McGregor, was so feared, when captured, he was hung and tortured and various body parts taken and displayed to multiple areas, to discourage the rebellion of others. It is said the the Roman Emperor, Hadrian, built this famous wall, to avoid the wrath of the "wicked and unhappy race of ClanGregor", and others of the Scottish rank.

So the daughter of the Scottish minister grew up in the Uwharrie hills. They were not isolated, as a community had grown around the area of the Narrows and Falls of the Yadkin and their property would lie near one of the few roads in the area that led to a ferry crossing. She grew in the Baptist faith and sometime about 1790 or 91, when she was 17 or 18, She would marry another minister, Rev. Bennett Solomon. Bennett Solomon and his brothers William Jr and Goodwin, were from Franklin County, sons of a William Solomon and Deana or Diana Gordon Solomon.

Bennett's name is found in church records and often times in conjunction with that of Rev. McGregor.
He shows up in the 1810 census of Montgomery County near a Melton, believed to be Jeptha, Thomas, William and Bartlett Huckabee, Isaac, Alex and Thomas Biles, John Kirk ESQ., and Thomas and James Cocks and Moses Carter. Bennett and Ava have 7 children under 16.

In the early 1820's, a Bennett Solomon appears in court in Cabarrus County, NC with a charge of having fathered a child with Elizabeth Carter out of wedlock. There were no Carter's in Cabbarrus. Elizabeth may have been a daughter of Moses Carter. Goodwin and William Solomon also appear in Cabarrus County court at times in civil matters, unrelated to this, as does Drury Solomon, who actually lived in Cabarrus County. I believe this was Bennett Solomon, Jr. son of Rev. Bennett Solomon and Ava. Sources give the date of Bennett Sr.'s death as 1818, although I am not certain of this and have found no documentation, no will, no tombstone. It may just be the last date there is record of him.

There is no 1820 census available for Montgomery County. It was possibly burned in one of the many courthouse fires. I have a cache of information on the Solomons and McGregors and land records in one of my many overstuffed notebooks, but they are not at hand at the moment.

What is known is that by 1830, Ava McGregor Solomon, sometimes called Avey or Avery, had migrated to Warren County, Tennesee, with most of her children, to live close to her brothers who were already there, 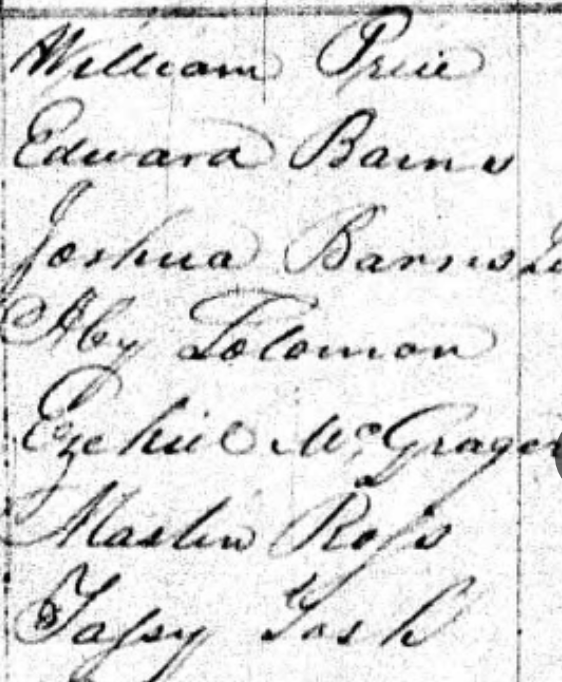 In the 1830 census, Ava is a widow and living next to her brother, Ezekial McGregor. She is the "Aby".

Second son William Solomon, my direct ancestor, would take over as shepherd of the flock and follow his father and grandfather into the ministry. As such, he remained in North Carolina to lead the Congregation his forebears had founded. In fact, it is said the congregation of The Mouth of the Uwharrie became Stony Hill and the site of the old church is just down the road from the Kron House site at Morrow Mountain State Park. The church later moved a few miles down to a hill above Valley Drive, where it remains today.

By 1840, Ava seems to have moved in with her son Willis, who had married Myrick Safely about 1838. The Safely's also hailed back to North Carolina.

Ava lives to be enumerated in the 1850 census. One day, my goal will be to access Tennesee land records and see what I can discover there and to explore that branch of the family tree more in depth. Sometimes those who migrated away from their homebase,  treasured and preserved family history and information more than those who remained.  In the 1850 census, she is listed next to, but in a separate household, to her son, Willis Lymon Solomon. Willis sometimes got labeled "William" while in Tennesee as William S. Solomon, his brother, remained in North Carolina. This error was included in the 1850 census, but we know it was Willis due to his middle initial and the names of his wife and children. Willis was a name passed down the McGregor line.

I descend from the one son who remained in "West Pee Dee", Rev. William Soloman. He married Tabitha Marks, the elder daughter of James and Catherine "Caty" Gunther Marks, who had arrived in the area in the 1820's from Chatham County, NC. William stayed close to the Marks family. Some of his cousins, the children of Goodwin Soloman, who died in the 1840's, also remained in the area.

Ava "Avie" McGregor Solomon died on October 5, 1857 in Warren County, Tennesee, at the age of 79. Her tombstone is inscribed, "Wife of Bennett Solomon". She is buried at the Smyrna cemetery in Irving College, Warren County.

The known children of Bennett Solomon and Ava McGregor were:

Some also add in an oldest daughter named Tehoney, as being firstborn. I have no documentation of her.

Rest in Peace in the Tennesee hills, Grandmother Ava.