My 3rd Great Grandfather left me one clue on who his mother was in the marriage certificate of his second marriage to Abigail Furr Starnes, widow of his cousin, John Starnes. He named his parents as "Fred and Sally". 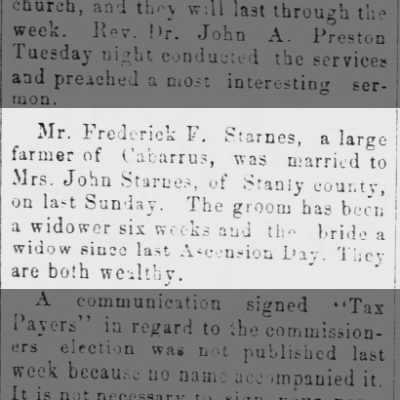 I already knew who his father was, as they lived side by side for 3 decades, 1860,1870 and 1880, even after the move from Union County to Cabarrus. His father, Frederick Starnes, one in a sea of Frederick Starnes in a decent from our original German immigrant, Frederick Sternes, had married an Elizabeth Thompson, much to young to be the mother of my Fincher Starnes, who went by "F. F. " most of the time. And she wasn't a Sally.


Another few things that puzzled me about Finch was that the censuses stated he was born in Georgia. His father was born in the section of Mecklenburg County that became one half of Union County, "Starnes Country", so why would they say that Finch was born in Georgia. The second thing that had me perplexed was that he was no where to be found in the 1850 census, but I knew from his Civil War records and one land record that at that time, as a young man, he had property on the Rocky River Road, just across the state line into Lancaster County, SC.


The following link was part of my pondering about Finch. Providence.

After writing that post, I came across a distant Starnes cousin named John Fields, (his Christian name), who is a walking history book. He is also an utmost expert on anything Starnes or Sternes.
And he had all the answers. Finch's mother was one Sarah "Sally" Fincher.

The daughter of a minister, Rev. William Starnes, she had several brothers who were also ministers. It is with the minister, whose obituary is to follow, that is all made sense.

Frederick Fincher Starnes was born on August 20, 1828. It was during this time that his grandfather, Rev. William Fincher was in Georgia, preaching in the Monticello circuit. Frederick Sr. and Sally must have accompanied her father to Georgia during this time.

Some of them may have died, but all of them but Finch? I hope not. Who were they? This was in Mecklenburg because Union hadn't been formed yet.


After finding out about Sarah's family, it only makes sense. There were several Starnes/Fincher marriages.

Her brother, Rev. Silas Jordan Fincher, had first married a lady known only as "S. B. Starnes." What did S. B. stand for? The most popular S names for girls of the day were Sarah and Sussannah, but there was also Sabra, Samara, Samantha, and several less seen others. B, with their German roots, many have been Barbara, but we don't know. She could have been a sister of Fred, Frederick Fincher Starnes' father. 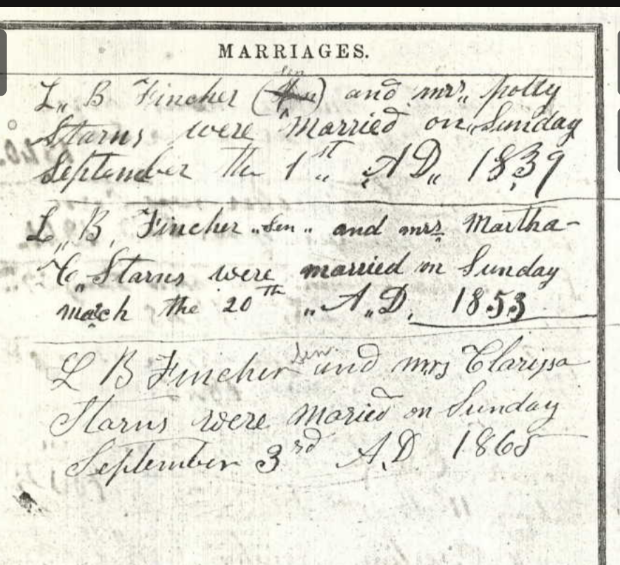 Her younger brother, Leroy Burton Fincher married 3 Starnes women, Polly, Martha and Clarrissa, as is written in his Family Bible. Clarrissa was a Starnes widow, born a Richardson, as she is mentioned in the will of her father, Kendrick Richardson. Some family trees have tried to merge Martha and Clarrissa into one person. However, you can clearly see by his Family Bible, that he married Martha C. Starnes on Sunday, March 20, 1853 and he married Mrs. Clarrissa Starnes on Sunday, September 3, 1865.


Most Mecklenburg County (Union included) Finchers are descended from a man named Jonathan Fincher, born about 1704 who settled in Chester County, Pennsylvania. He, or his family, were from England. As a note, Chester County is where I was born. He moved to Orange County, North Carolina by 1755 and died just two years later. His Will is dated 20 March 1757.

This Jonathan was married twice, first to Deborah Dix/Dicks and had two sons, Joshua and Jonathan Jr. His second wife was Jane Busby by whom he had 5 children: Mary, Richard, Joseph, Hannah and Benjamin.

My line is from first wife, Deborah, as Jonathan Fincher, Jr. was the father of our Rev. William.

Rev. William Fincher was born on March 30, 1765 in Rowan County. His father patented land there near his birth, but did not remain. They settled in Eastern Mecklenburg, the portion that would be combined with the western portion of Anson County to form Union in 1842. They lived near the North Carolina/South Carolina border, near the territory of the Cheraw Indians, known as "Indian Land". 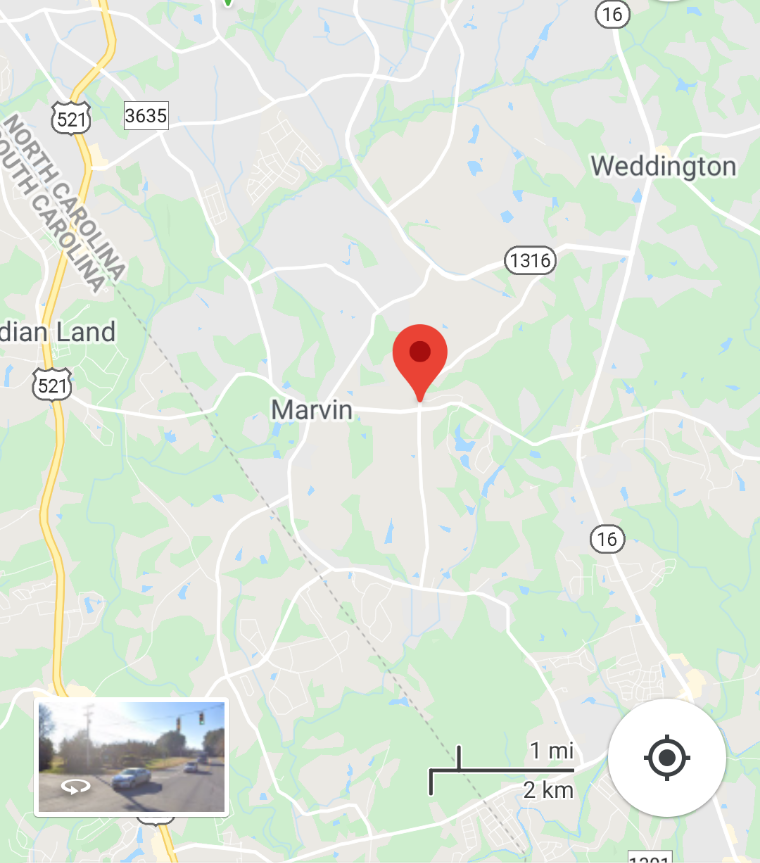 The above map shows the general area of where the Finchers settled.

Rev. William would marry 3 times. The last two times were later in life, after the birth of his children, so all of his children were by first wife, Mary Grace. His second wife was Elizabeth Calloway and his third was Nancy Skipper.

Mary Grace had been born on April 10, 1763, in Everleigh, Wiltshire, England, making her my 5th Great Grandmother. I actually know a little bit more about her and my 6th Great Grandmother, Shirley Marie Wilcox, William's mother, than I do about poor Sarah Fincher, who died young.

Mary Grace was the daughter of John Grace and Sarah Deare. Somehow, those names sound so beautiful to me.

Sarah Deare was baptized in Llantwit, Major, Glamorgan, Wales, daughter of John and Mary. She married John Grace on May 27, 1753, in Pewsey, Wiltshire, England. John was from Wiltshire.

The 'Vale of Pewsey' is a beautiful area, full of ancient, thatched roof cottages and home of  the "White Horse of Pewsey", one of the Wiltshire White Horses, figures of horses carved into white chalk hills. Below is an article on the White Horses of Wiltshire.

So Mary Grace Fincher is one of my immigrant ancestors, perhaps my most recent one. My roots go waaayyy back into the American diasphora. I had ancestors living in the same general area where I currently live, long before Mary Grace Fincher arrived in America.

Rev. William Fincher and wife Mary Grace Fincher would raise a family of 12 children. The name of one daughter, born in Mecklenburg County, NC and who died in 1840 in Fayette County, Georgia, is yet unknown.

Please remember, some of these years of birth are "appoximate" and could have differed a number of years. On the older children, their exact date of birth is unknown.

With the union of the English/Welsh Sarah Fincher and the German-descended Frederick Starnes IV, two lines of decent came together to form my very American ancestor, Frederick Fincher Starnes.

I don't know exactly when or where Sarah died and was buried. Most likely somewhere in Union County. I just know it was before Fred would marry Betty Thompson, and their first child came in 1836.

Happy Mothers Day Sarah Fincher. I am so glad to know who you are.


Addendum: I forgot the best part. In the Thru -Lines feature on ancestry.com, adding in an unknown female ancestor and having matches is not going to mean anything. That couple is your biological ancestors, and you've already added the man, you are going to match the wife, whatever name you put in. However, when you add her parents, and you match multiple descendants of 9 out of her 10 siblings (the 10th died young without children), then you are on to something. You can be pretty confident you've got it right.

This was so wide, I can't get it the whole thing in one shot, but this is what has happened since I added Sarah Fincher as my ancestor a few months ago. I'm a DNA match to 3 descendants of her brother, Rev. John Fincher, 8 from her sister Martha Fincher, 7 from her brother Benjamin Franklin Fincher, 4 from her brother  William Fincher Jr., 8 from Rev. Silas Jordan Fincher and 17 from her youngest brother, Leroy Burton Fincher.

And the beauty of it is, the more people who make it this far in their family tree and figure out that they are descendants of this family who have taken dna tests on ancestry, the more matches there will be. Thank you John Fields, you are amazing.
Posted by Jobs Children at 4:51 AM