Sunday Black Sheep: The Abashing Story of Marion Hudson and his Aunt Polly Marion, likely named for South Carolina Revolutionary War Hero, Francis Marion, aka The Swamp Fox, was just a small boy when his mother Sarah died, and his father then remarried Sarah Arrena McSwain, who gave Marion two more sisters, Sarah Ann and Ella. He already had an older sister, Nancy Caroline, and a younger sister, Emma Francis, known as Fanny. Caroline was my Great, Great Grandmother.

Marion was only about 7 or so, when his father Burwell died, on December 7, 1862, in Richmond, Virginia, of pneumonia, during service in the Civil War.

Soon, the young couple had started a family. Hammit Jefferson Hudson arrived on September 6, 1877 ,followed quickly by sister Nancy Lee 'Nanny' Hudson, named for her grandmother Sarah Lee and aunt, Nancy Caroline on June 15, 1878, and another sister, Harriett or 'Hattie', about 1879.

Something must have soured in the marriage after the birth of Hattie, or maybe there was an illicit relationship all along, but soon, an event occured which branded old Uncle Marion a member of the Black Sheep Club. 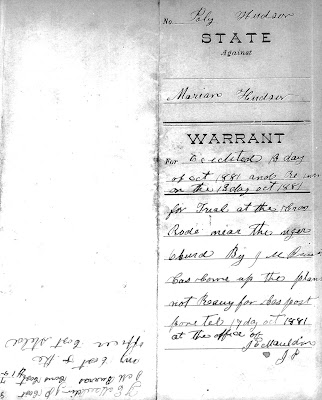 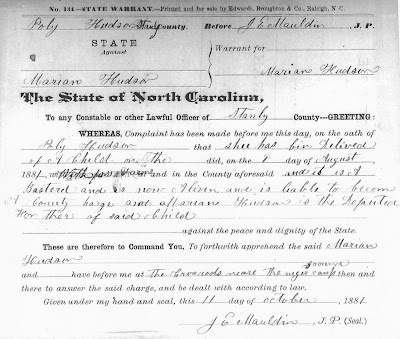 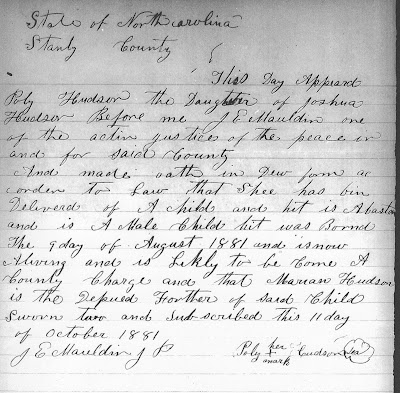 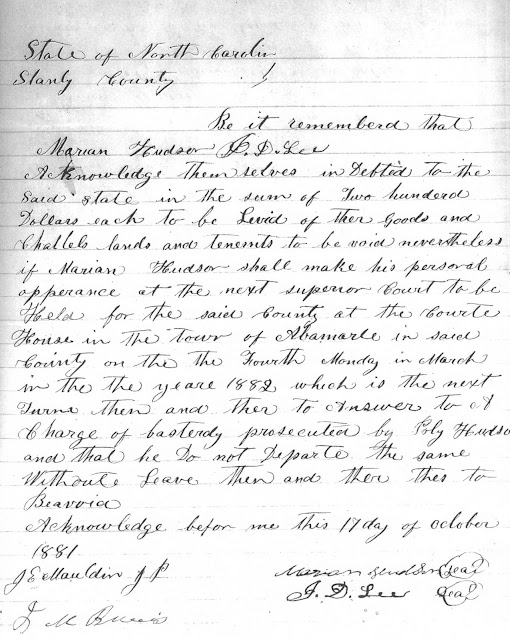 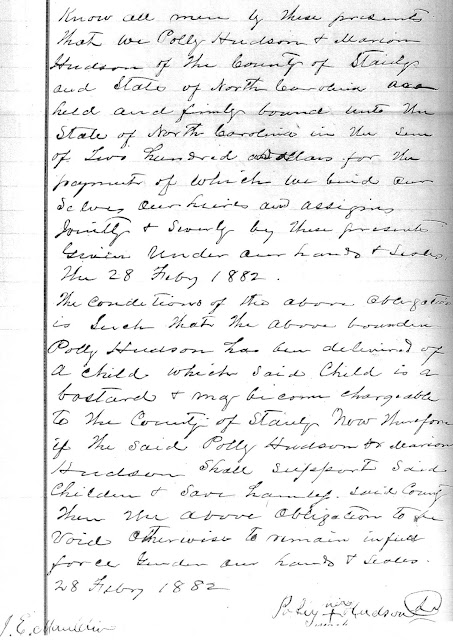 The five documents above declare that on August 9, 1881, Mary Hudson, known as Polly, gave birth to a son, and that the father of that son was Marion Hudson.

Having a child with another woman, while still married to his wife, would probably be enough to qualify Marion for the Black Sheep Club, but the grime becomes thicker.

As stated earlier in this post, Marion M. Hudson was the son of Burwell Hudson. Burwell Hudson was the son of William Joshua Hudson, 1796 - 1896, known far and wide for his longevity and proclivity. Joshua Hudson left hundreds of descendants in counties all around, and states afar, by the time of his death. Burwell was one of the sons born to Ol' Joshua by his first and most fruitful marriage to Elizabeth "Betsy" Smith.

Joshua, Marion Hudson's grandfather, had a daughter Mary. aka 'Polly', in 1862. This was the  year that Marion's father, Burwell, died. Marion was several years older than his aunt, or half-aunt as the matter may be.

This Polly, his 'younger-in- age' Aunt, was the Polly Hudson spoken of in the above documents. In 1881, she would have been about 19 and Marion about 25 or 26,  who was also married, with 3 children.

He and his wife Margaret would have 4 more sons after the birth of his 'baseborn child' with his young Aunt Polly.


The son born to Polly Hudson and her nephew Marion was called John Franklin Hudson.

I have not yet located with whom he spent his childhood, but on March 12, 1899, 17 year old Franklin Hudson, son of  Marion and Polly Hudson, married Minty Whitaker, who was also an illegitimate child, daughter of William Whitaker and Lizzie Hendley, age 22. Having the shadow of shame on them may have brought the two unwanted chidren together. William Whitaker is a leaf off of my Murray family tree, having descent from Sophia Murray Whitaker and husband Nelson Samuel Whitaker.

Polly Hudson lived her years unwed and scorned, taking up residence with the James H Nichols family in Center, Stanly County, North Carolina, where she is listed as a cousin in one census and a sister-in-law in the other.

James Franklin Hudson and Araminta Laura Whitaker Hudson would have 6 children. They would first take up residence in the Tyson Community where their heritage lie, but would later relocate across the Pee Dee river in Montgomery County, where they would settle on Cheek's Creek to raise their family.

Minty would pass away at the age of 60 of heart failure and be buried in Mt. Gilead, North Carolina.

Frank would remarry, to a lady named Mary and survive to the ripe old age of  69, still farming, and would fall and fracture his hip. He was admitted to the hospital in Wadesboro, Anson County, and died on July 18, 1850 of a Cerebral Hemorrhage and Cardio-Vascular disease after 13 days of being in the hospital due to his fall, which had occurred at home according to the informant, his son Winston.

He was survived by his widow Mary and the children of himself and Minty.

In the Permanent Voters Record of Stanly County, Frank Hudson is listed as descendant of Burwell Hudson.

His family knew of his sordid beginnings and did not hide them. On his death certificate, son Winston listed his fathers father as Marion Hudson and his father's mother as Polly Hudson.