In perusing old newspapers, I came across this interesting love triangle between some Cabarrus County German -extracted folk of the names of Earnhardt and Misenheimer. Seeing as the story was labeled an "Enoch Arden" case, I first sought exactly who, or what, Enoch Arden was.

Turns out, Enoch Arden was a poem published in  1864 by Alfred, Lord Tennyson. The title character to the story, Enoch Arden, is a married fisherman, with a family, who gets marooned on a desert island for a period of time, and is eventually rescued, and returns home to find his wife married to another man, assuming Enoch dead, and having had a child by him. Poor Enoch does not reveal himself to the happy family and dies tragically of a broken heart. Parts of the story remind me a hair of Tom Hanks character in "Cast Away".

The characters involved were William Earnhardt, born around 1836 in the Gold Hill section of Rowan County, and son of James Allison Earnhardt and wife Esther Long Earnhardt. In a sort of a twist, William Earnhardt played the role of Enoch. His wife was Cornelia Elizabeth Dotson, born in 1846 in Iredell County, daughter of George Washington Dotson and wife, Barbara Patterson Dotson. Cornelia's second husband, identified wrongly as "George" Misenheimer in the newspaper article, was actually Henderson Misenheimer, born in 1822 in Cabarrus County, NC, son of Milas Joseph Misenheimer and wife Mary "Polly" Milnster Misenheimer. Also involved in the story was Miss Jane Amanda Sloop, born about 1840 in North Carolina, most likely Rowan County, daughter of George Peter Sloop and wife Mary Shinn Sloop, who became the second wife of William Earnhardt.

The following is the newspaper report:

In 1850, we find William Earnhardt as a 14 year old, living in the home of his father James, with his older siblings, David and Esther. William was the youngest son.


William's father would pass away in 1856, leaving a will, and his mother died in 1840, when William was only 4 years old. William can not be found in the 1860 census, but it is possible that he traveled to Tennessee, and then maybe to Mississippi, with his nearest in age older brothers, George and Joseph, and then decided to return to North Carolina. What is known is that he was in North Carolina, in Cabarrus County on March 12, 1860, when he married Cornelia Dotson.


Cornelia can not be located in the 1860 census either, so it is possible they were married and were missed altogether.

William Earnhardt, like most men of his age in this time, served in the Civil War.


He and Cornelia had three daughters, Margaret, Barbara and Alice, and by 1870, he had abandoned his family.  The 1870 census finds Cornelia (transcribed incorrectly as 'Camillia') living back with her mother. Barbara, and her three young daughters. As Alice, the youngest, was born in 1869, William had not taken off immediately after the war, but likely soon before or after Alice's birth.

Some time between 1870 and 1877, when the newspaper article came out, Cornelia, held in the community as a moral and hardworking lady, heard that her husband was dead and went into mourning.


Henderson Misenheimer was a much older widower, and a businessman in the Cold Water Community.  He had likely known Cornelia since birth, as her mother was a Patterson of the Mt Pleasant/Cold Water community and Henderson was in business with her relatives. 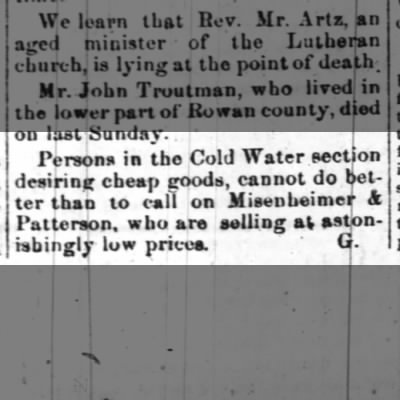 
Henderson Misenheimer had married Mary Esther Downum, known as "Polly" as many Mary's were nicknamed in that day, at the age of 20 in 1843. Together, they had 4 children, Elizabeth, Mary, son Jesse and daughter Margaret, known as "Hettie". The 1850 through 1870 census records show them as an intact family, and the children growing older. Henderson was also wealthy enough to have an employee living with them each time as well.

Henderson was a skilled craftsman and businessman, as well as a farmer, as most people were. He lost his wife Mary in 1873. His children were grown and even his youngest daughter Hettie, would be married in 2 years to a David Irwin, so Henderson did not need a wife to raise his young children. Most likely, he saw the young hardworking widow with 3 small daughters and thought they would bring joy and youth back into his home again.

But what of  William Earnhardt?  Around the same time that his wife Cornelia was expecting their second child, Barbara, named obviously for her maternal grandmother, William Earnhardt had fathered another little girl, named Mary Elizabeth Sloop, called Betty, with Jane Amanda Sloop, known as Jennie.


George Misenheimer must have been lurking close. His habits may have gotten him into a bit of a fix, too. He was having medical issues that made the post.


So about 1877. Ol' Bill Earnhardt, after a successful surgery, decided to show back up on his abandoned families doorstep and what does he find? His wife remarried to Henderson Misenheimer and 2 small kids to boot. The newspapers report what happened next.  The story was published near and wide. 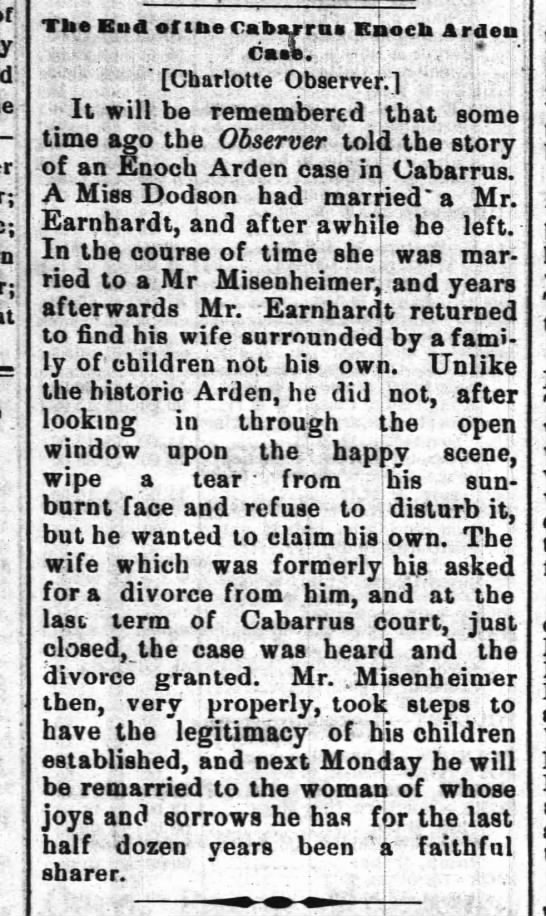 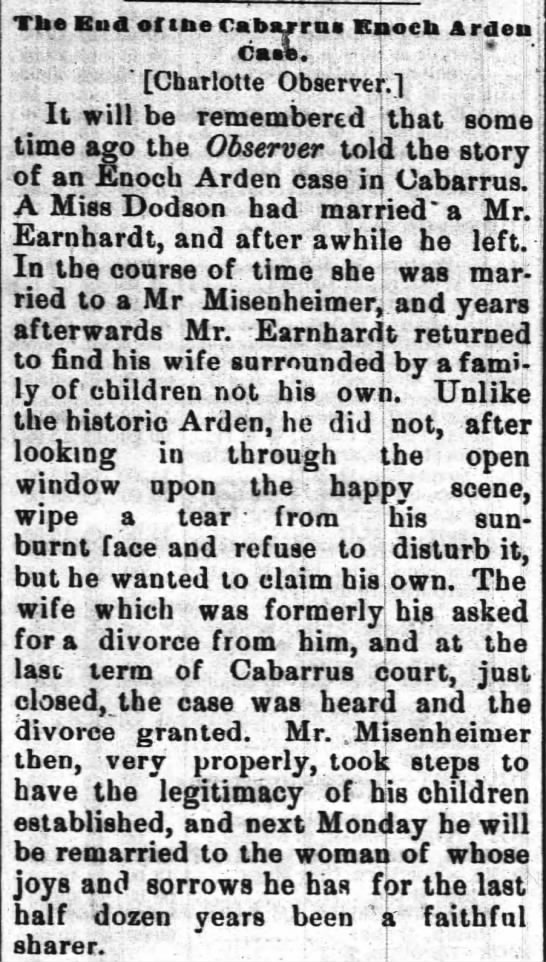 On July 25, 1878, 5 years and two weeks after his first marriage to Cornelia Dotson Earnhardt, Henderson Misenheimer married her again and went, as the papers said, about legitimatizing his children by her.

The 1880 census records show two children for the couple, more may have been born and died.


But they were not the only couple to get married that year.

On  August 8, 1878, after his divorce was final, William Earnhardt made an honest woman out of Jane Sloop.


The 1880 census shows them living together with their daughter Betty, now 14.


The twenty years between the 1880 and the 1900 census is a huge leap of time. During that time, William Earnhardt disappears, presumably actually dead this time.

Jane, a widow, is living with her only daughter, Mary "Betty" Overcash and Mary's 5 year old son Locke. Both women are listed as being the mothers of one child and one child living.

Betty had married several times. Her first husband was a Goodman, possibly William Goodman. She had married William Overcash in 1886, at the age of 20. Her first son, Locke Triplett Overcash was born in 1895.  Mary Elizabeth would marry again, on November 6, 1901 to Horace Shehan (or Shinn).


By 1910, although their 8 years of marriage had produced 3 children, only one of them, Robert Ford Shehan, survived.  She would have one son, whose tombstone would survive, Lemuel A. Shehan, who was born on September 21, 1906 and pass away as a toddler on July 29, 1908.

Horace Shehan would die on August 20, 1921of TB,  and was buried in the same cemetery as his son Lemuel, Lebanon Lutheran Church in Cleveland, North Carolina. His wife, listed as Mrs. Betty Shehan, was living, but no more is known of her.

Henderson Misenheimer passed away in 1920. 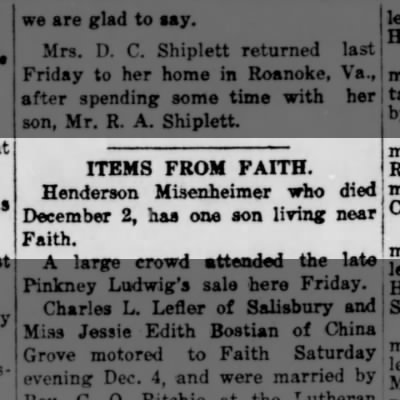 Posted by Jobs Children at 6:18 PM No comments: