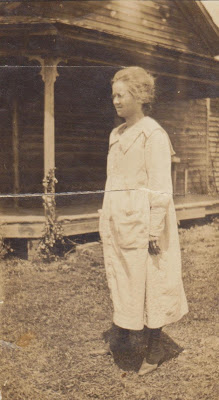 The first time I saw her picture and heard her name I was 5 years old. The summer before first grade. The haunting photo of the lost old lady in a baggy sack of a dress with a large collar and deep pockets, and the pointed shoes,  never left my memory. Her image was captured in front of a weathered cottage, not underpinned, with fields in the background. Her light colored hair was pinned up, but falling down and looking wind blown. She looks not at the camera, but to the distance. What was she looking at, if at anything at all? What sites and change those eyes had seen. Her name was Caroline Ann Hudson Singleton. She was born November 21, 1852 and died June 11, 1930. She was my Grandmother's Grandmother. I find this generation the most intriguing. Maybe it's because they were survivors who suffered through a pivotal, painful period of American history. They carried the cross for future generations and paid for the sins of previous ones.

Caroline was born before the Civil War, when slavery was in existence, and the area she grew up in was sending wagaons and later, trains,  full  of cotton to the ports in Wilmington. She was the oldest daughter of Burwell 'Burl' Hudson and his first wife Sarah 'Sallie' Lee. Burwell was one of the sons of Stanly County Hudson patriarch William Joshua Hudson, who was known for his long life of 100 years and of having fathered over 20 children, outliving two wives and marrying a 30 year old when he was 70 and  his last child being born during his mid-80's. Burwell was a son of  Joshua's first wife, Elizabeth 'Betsey' Smith. Joshua had been born near the Virginia/North Carolina line and came to the Anson County area at a young age. He bought 800 acres in what is present day Stanly County from Lewis McSwain and built a small sturdy home on Ugly Creek, in which he raised 22 children, which still stands.

Sallie Hudson would die prior to 1860.  She was the daughter of James Carl Lee and Elizabeth Duke or Duck Lee. Sarah Ann, born in 1860, younger sister of Caroline,  may have been the daughter of Burwell's second wife, Sarah A. McSwain, whom he married on January 17, 1860, possibly immediately after the death of his first wife, Sarah Ann Lee Hudson. Between Caroline Ann and Sarah Ann were Marion M and Emma Francis Hudson.


Several of the Hudson boys went to war during the Civil War. Burwell did not return. He died December 7, 1862 in Richmond, Virginia. Caroline and her  two youngest sisters were left fatherless and living with their stepmother near their grandfather in the 1870 census. Her brother Marion M Hudson and sister Fanny were living with their grandfather Calvin Lee.  Sometime around the time of that census, Caroline met a man. She may have known him already, he may have been a neighbor, or even a relative. That part is not known and probably never will be.

Her mother died when she was about 8. Caroline must have had to be a mini-mother to her younger siblings. Then her father died when she was around 10. She had a stepmother, Sarah Ann McManus, who married an elderly man, John Norwood, in November of 1870. She was 39, he was 73. They would have 2 children together, John Henry Norwood, born in 1872 and Laura, born in 1874.

The days and years of post Civil War reconstruction were ones of desparation and suffering in Stanly County. There was a report of women and children from the southern part of the county, raiding the storehouse in Albemarle for want of food. All the males that were left were old men and young boys. Of the soldiers who did return, many did not return whole, but missing limbs or minds. Suicides were rampant. Murders went unreported and unpunished. Fields were abandoned. People were starving. Citizens, both black and white, were uncertain of how to move forward. Many tried relocation, heading mostly North and West. Many widows, orphans and the elderly, did not have the means or the health to relocate. Some young widows like Sarah Ann McManus Hudson married old widowers, who had homes and property, like John Norwood. Some would marry teenage boys 10 years their junior. Females of this time had few resources or rights,  and fewer options.

How Caroline became an unwed teenaged mother is not known. Perhaps she became the mistress of a more secure married man. Several men in Stanly County in these days actually supported two families, having children by both a wife and a mistress simultaneously, or back and forth. Perhaps she met a boy her age and fell in love, and without the guidance of her father or mother, a pregnancy occured.

What is known is that she had a son she named James Robert Hudson on December 8, 1868, six years after her father died.

My grandmother looked very much like Caroline, her own grandmother, in her later years. My Daddy, Robert, carried a strong resemblance to his grandfather, J R Hudson.

I would like to see several descendants of James Robert Hudson take the Ancestry.com DNA test, to see what distant cousins may pop up, genetically, to at least track down what family his father probably came from. I have a theory, based on Caroline's naming of her children, and known 'ramblers' of the Tyson community during these days, of who fathered J. R.

James Robert Hudson was not Caroline's only child. On November 26, 1881 she married Robert Dock 'Dodi' Singleton, the son of Tillman F Singleton and Fannie Swaringen Singleton. Dodi had just lost his first wife, Priscilla Duke, who had died in 1880. She might have died in childbirth, but they had no child.


J. R. Hudson would have 2 daughter by the time his mother had her last child. My grandmother was born the same year as her Aunt Pearl Singleton. 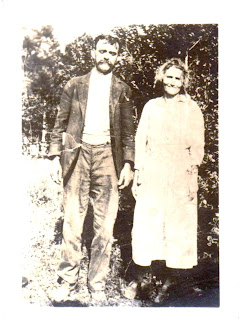 The only other photo I have seen of Caroline, she and Dodi are in middle age. Her blonde hair appears windblown and disheveled in this photo, even more so as the one made in her later years. She even appears to be wearing the same dress, albeit 20 years perhaps prior to the other photo. I've even been able to picture her as a windblown, disheveled little 8 year old, just having lost her mother, as she gazes out across and endless meadow.
Caroline died on a June day in 1930, at the age of 77, and is buried in the Norwood Cemetery in Norwood, North Carolina. She was a witness to the Civil War and lost her father. She saw her son off to fight in WWI. She saw her granddaughters bob their hair, wear pants or 'bloomers' and shorter skirts during the Roaring 20's. She rode in a car, talked on a telephone and listened to the radio. What a burden of sorrow and shame she had carried. What a breadth of change she had experienced.