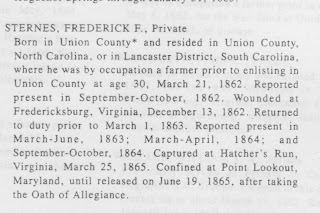 Yesterday, I received the papers on the military service of Frederick Fincher Starnes or Sternes, my 3rd Great Grandfather. He served during the Civil War and there was some ambivalence as to where he was born, due to some faulty census records. This helps clear up where he was born. His two oldest daughters are clearly listed as being born in South Carolina, from their marriage licenses to their death certificates, to those of their children. Maybe now, knowing where in South Carolina to look, I can find F. F in the 1850 census.

Map of Fredericksburg, Virginia during the war.

Currier and Ives print of the Battle of Fredericksburg, on December 13, 1862, the day F. F. Sternes was wounded.


He returned for the Battle of Hatchers Run, where he was captured. 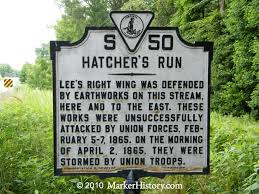 Strategy map of the Battle of Hatcher's Run.

Officers outside of House used as Headquarters prior to the Battle.

Lithograph of the Battle of Hatcher's Run

He was captured during the battle and taken to Point Lookout, Maryland prison camp, from where he was released at the end of the war.

Prisoners at Point Lookout taking the Oath of Alligiance. Was Finch Starnes among this group?