I visted a new county in my geological quests, Moore. The county seat of Moore is Carthage, a historic, picturesque town. Carthage, North Carolina is a town along Hwy 24/27 that runs from Mecklenburg County through a small portion of Cabarrus, through Stanly and Montgomery into Moore. Coming into town, the highway is lined with beautiful Victorian homes, some in pristine condition, others in disrepair. Passing these homes, you find yourself at a beautiful old Courthouse sitting squarely in the middle of the street, taking up a block and the town woven around it. 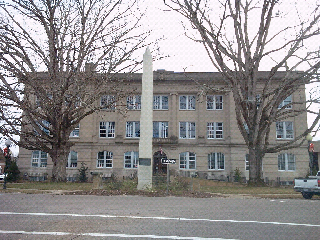 Also along Hwy 24/27 is this beautiful Methodist Church. I am researching the movements of John Teeter Davis, a grandson of Job Davis, as he had moved to the Little River Community, which is now in present day Moore County. 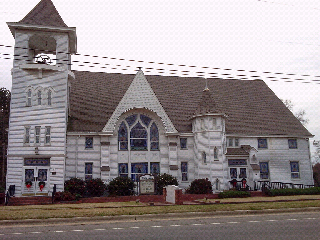 As the Davis family had a long tradition of Methodism, I wonder if in his last days, John Teeter Davis may have visited this church. 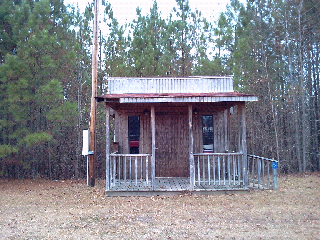 Traveling East along Hwy 24/27, are several old homes and  small abandoned store buildings, which would have existed when the Davis family made the trip from Stanly County to Moore, which at the time would have just been Hwy 24.  The Little River Community has an interesting history. The Davis family moved there sometime after the 1920 census, in which they are shown in the Tyson Township. An early Stanly County newspaper calls J T Davis "of Rocky River Springs" which at the time was a resort bordering the old Davis plantation. They moved there before the death of Jenny Lavina Hooks Davis, the second wife of JT in 1929. The youngest daughter of JT and Lavina, Jewel Lee, was born there according to her birth certificate. Jewel Lee's birth certificate was in Carthage, Moore County, as her birth is listed in the small town of Vass, bordering the Little River Township. Lenora and JT's death certificates are listed in Hoke County. The Little River flows just north of the Fort Bragg Reservation and through Cumberland, Moore and Montgomery Counties. The Lobelia community and the Lobelia road were among the only ones in the area at the time. Hoke County was formed in 1911 from portions of Cumberland and Robeson Counties. The Little River community was part of Hoke at that time. Sometime after WW II, Little River became cut off from the rest of Hoke County by Fort Bragg, and eventually became part of Moore County, giving Moore a jagged little foot that fits neatly along the border of Hoke. J T's oldest son with Lenora, Ray, was about 18 at his father's passing in 1932 and married and remained in Vass, Moore County, probably on the same farm his father had worked. Two of the sisters, Maxine and Christine, would return to Vass. I am in the process of tracking their movements after their father's death, now. Jewel Lee, who was born just before her mother's death, was given to J. T.'s half-brother, Travis M. Crump to raise in Stanly County, born in 1929, she is now 83 and lives in Albemarle. While Carthage is a quaint little town built on a Buggy Company, 'The Tyson and Jones Buggy Company" and a wheelwright shop ran by the Kelley family, further out into the Sandhills of North Carolina is a rather desolate area. The area of Hoke, Cumberland and surrounding counties was originally settled by Scots coming up the Cape Fear River. In the early days of the formation of Hoke County, between 1900-1910, it was described as a "wilderness of pine barrens". There were said to be no roads, just little dirt tracks between the sparse farms. The Little River valley must have been the most fertile. There were no trains through the area at the time either.

I have been looking for clues as to why J. T. Davis would leave the lush green landscape of the Rocky River, and venture into the no man's land of the Sandhills. My guess is the change in topography over the last 200 + years. When J.T's grandfather, Job Davis arrived in the 1790's from Mecklenburg County, Virginia, he would have also found a virtual wilderness along the Rocky and Yadkin Rivers, but a very fertile one. By the time, J. T. 's stepfather, who gained custody of J. T's sisters child, Ouissa Stewart, applied for permission to sell part of his 17 year old wards share of her grandfather's estate, he described the property as  such, "While the lands herein described is a considerable body of land, it is poor, hilly, has no buildings of any value on the same, is all rundown, so that said lands, in the way rent, will not and can not in the present condition, bring to his said ward in rent any reasonable amount. "

The land along the Rocky River went from a lush and fertile wilderness, when settlers first began arriving, to over-farmed, and worn-out soil, after 150 years of occupation. By the late 1890's through 1910, when J. T. Crump gained custody of his step-children and step-grand-daughter, the population had grown considerably. J. T. Crump stated in the court papers that Ouissa's uncles, who were adults by then,  had sold their other 2/3 parts of the inheritance to W. H. Bivens.

I can imagine John Teeter packing up his family into a wagon, or maybe he owned a car by this time, and driving across the new Swift Island Bridge, which had been built in 1922 and rebuilt in 1927, replacing the Swift Island Ferry, and following old Highway 24 into the Sandhills.

The Little River is no more than a creek as it runs through Montgomery county, neighboring Stanly. Near it's crossing of the highway, just outside of Troy, an old roadbed veres off following the direction of the river. In fact, old roadbeds can be seen all across the highway through the Uwharries, as part of the highway must have followed the exact path of this old road, while in other sections it was 'straightened'. The Davis family may have taken the river road all the way to Lobelia.

The 1930 census, taken just after the death of J.T.'s second wife, Jenny Lavina Hooks, gives us a small glimpse into the life of the family.
Posted by Jobs Children at 10:49 AM