The estate of Robert B Lemmonds was settled in Cabarrus County in 1898. He was one of my great-great grandfathers. Attached to the estate papers is a suit by a Mr. M. Oglesby. He was a merchant whose store was located in and around the Pless Mill area of Cabarrus County, North Carolina. Records show only one Oglesby family in the area, so it had to be him. Bob Lemmons worked for Mr. Oglesby from time to time. I call this the case of the Six Black Hogs, because it centered around this livestock. Black Hogs are a heritage breed, brought to this country from China via England in the late 1800's. They are a grazing pig and will forage for their food. They were raised for their hardiness, their exquisite flavor and gentle nature. They were an easy hog to keep and safer around families with children than the more aggressive strains.

W. W. Burleyson, a neighbor, was administrator of the estate of RB Lemmons. Much of the language in the first pages are directed at him. Much of the papers is in legal mumbo- jumbo and gives little in the way of genealogical information, so instead of quoting the document word for word, I will just pick the meat out of this beefy 36 page document about pork.

The first page dated January of 1898 mentions the action brought in Oglesby vs Lemmonds and that RB died the previous month, intestate. Page 3 begins the affidavit of F. F. Sterns or Starnes, father-in-law of Bob Lemmonds and my 3rd Great-Grandfather. 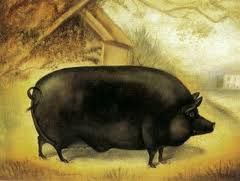 He states he believes this action is one of claim and delivery, began by a summons issued by W. J. Hill, a justice of the peace, on Nov. 25, 1889 and tried on Dec. 9, 1889. on demand of plaintiff for $20 and recovery of 6 hogs. "Wherein judgement was nudend by said Justice against Plaintiff for $6 cash of action." Against Plaintiff was underlined. Also mentioned on this page is that F.F. Sternes signed as surety, "undertook and became bound", with the defendant. NO. 3 on the affidavit is worth quoting. "That the defendant, R. B. Lemmons died in the later part of December, 1892, on premises and in the presence of this affient and was buried by this affient and other friends of deceased."

This paragraph gives a close account of the date of death for Bob Lemmons. I just wish it stated what he died from and where he was buried.

5)"That from the 30th day of Nov. 1889, when this affiant signed said undertaking as surety,this affiant never heard anything about this action, except that Justice Hill had indend judgement for $6 cash against the Plaintiff" ... At the end of this statement, we get a view of F.F Starnes' signature as well as that of Paul B Means, counsel. Bob Lemmonds mother was a Means, and kinswoman of Attorney Means.

There is a copy of the 1889 summons, where R. B. Lemmond signed with F. F. Starnes as surety for $50 against the collateral of Five Black Hogs. Bob Lemmonds signature is large and loopy, almost feminine in it's curl and clarity.
There follows summons on the following neighbors: David Cline, S.L. Thornburg, Fred Maynor, Cal Honeycutt, Fred Wagoner.
The next page is a "Chattel Mortgage" signed by Robert Lemmond and witnessed by Fred 'Wagner' to M. Oglesby for $10 and due October 1st, 1889.

The note continues "and to secure the payment of the same, I do hereby convey to him these articles of personal property, to wit: 6 Black Hogs & all crop of cotton com cotton seed & 'soise' on Fred F. Starnes land this year, 1889. This is the only mortgage I have given on the above named property. "

That seems a great deal of collateral for ten bucks, even in 1889.

A few more pages down is an Affidavit to Obtain the Delivery of Personal Property by owner. Mr. Oglesby claims to be the owner of
Six Black Hogs
Cotton Crop
Cotton seed
Corn crop
And claims the value of the property at $25, and that it is wrongfully detained by R.B Lemmons (who has been deceased over 4 years at this time) because he 'don't want to pay'.

There are 5 pages following which appear to be preprinted charge account tally held at Oglesby's store. The letterhead says he is a dealer in General Merchandise in Harrisburg, North Carolina and boasts the 'highest market price paid for Cotton and Cotton seed.'

The list of purchases gives a glimpse into the lifestyle and character of Bob Lemmons. His first purchase was a pair of boots for $2.50 on November 15, 1888.
He bought basics like coffee, molasses and crackers, but he was very fond of sardines, buying them by the case and 3 times just on the first page.
He paid a dollar for 4 days board, and made purchases for other people, including bacon for Mrs. Carver and cash for Cowan Pharr.
He had bad habits, buying a plug of tobacco and a keg of whiskey. He liked coffee, oranges and apples. He bought tweed and twice something called 'Paul's cloth'.
He was paid for 4 days work and four times sold bales of cotton, 7, 18, 17 and 10 at 80 cents per lb.

By August and September of 1889, his tobacco habit had really increased, every second or third purchase being a plug of tobacco. Was his death tobacco related? He died before death certificates.

The next sheets were of the continuance of this case in January of 1901, M. Oglesby vs. W. W. Burleyson, admin of R B 'Lemons'. (notice how the spelling of the name changes from document to document).

Mr Oglesby really wanted those hogs. The Plaintiff's case "when mortgage given hogs were on Starnes place. Six Black Hogs. Only found 5 when got C. & D. Property taken under C. &D. and recieved only 5 hogs. I valued hogs at $50.00 when I took out C. &D. I never saw them."

Following this is the interesting statement of Mrs. Lemons, widow of R. B. Lemmons. This is Leavy Starnes, my Great, great grandmother, daughter of FF Starnes.

She says, "I know the 6 black pigs or hogs. They were black and white spotted pigs. There were 5 of them when C&D taken out. They were worth only $15.00. They were all mine. My father gave the mother to me and I raised them. There never was 6 of them, only 5. My husband had no hogs. There were no other hogs or pigs on our place but these."

I will continue Leavy's statement in the next post. How did this case come out? Who gets custody of the pigs? Did 6 black hogs ever exist, or only Leavy's little spotted pigs?

Stay tuned for the case of the Six Black Hogs.
Posted by Jobs Children at 5:21 AM