Duncan Burris holds the enviable spot of two seats in my family tree. First, he was the brother of Rowena Burris, one of my great-grandmother's. Both of them were children of David T Burris and his wife Ellen Honeycutt Burris, who hailed from the Mission area of Stanly County, not too far from the Cabarras County border. Secondly, he became the step-father of my grandmother, by marrying another one of my great-grandmothers, Lottie Hill.

Dunc, as he was known, was what we would call in this day and time, 'a party animal'. It is not known at what point in time he got that way. 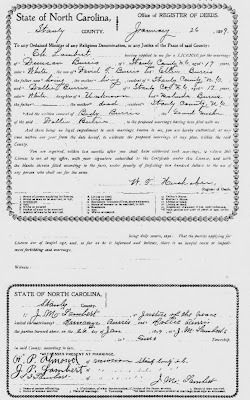 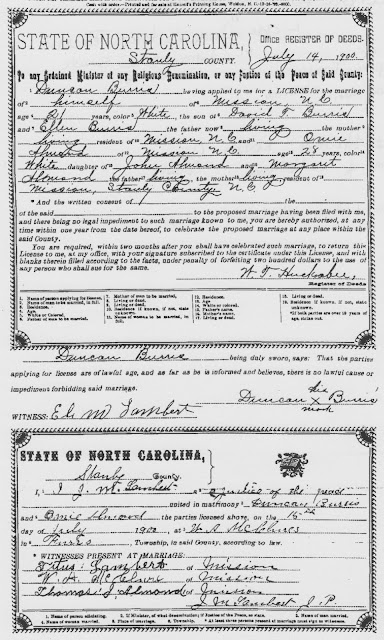 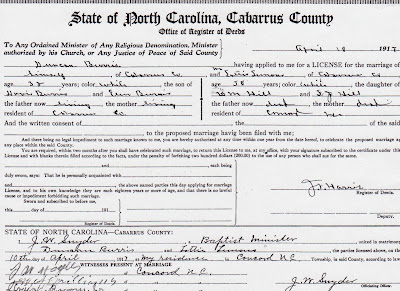 At the age of 19, Dunc married his first cousin, Dollie Burris, in 1899. She obviously only lived a year or less afterward, because his next wedding was in 1900. Dollie may have been the love of his life and the loss of her devastated him. What is known, is that just a year and a half after marrying Dollie, he was marrying a widow named Naomi Almond, at age 20. Omie was 8 years older than Dunc and had five children. As I mentioned in my post "The Divorce of Dunk and Omie", their marriage was not a happy one. Omie had made a full list of his comings and goings. He would stay with her awhile, come home, they would fight, she would throw him out, he would return sober and humble and promise to be a proper husband and she would take him back in. Over and Over. The cycle not unfamiliar to police and domestic violence workers who see this vicious cycle occur in many homes in similar ways.
According to Omie, at one point, Dunc wanted her to put her children by her previous marraige out of the house as he did not want the burden of supporting them. Omie mentions having an infant daughter with Duncan, who must have died, possibly due to a fight between them. She said Dunc would call her insultery names and accuse her of many acts of adultery.
She also accused him of adultery. In 1903, they had a son together, named Carl. In 1910, Omie had had enough of his drunken and aldulterous ways, and divorced him.

Duncan then moved to Concord, in Cabarrus County and went to work in the cotton mills. There he met his third wife, another young widow, a pretty girl who also like to party. Her name was Lottie Hill Lemmonds.
Dunc and Lottie were married on April 10, 1917.  Her three young children were 10, 5 and 2 at the time. Her two-year old daughter Bertha, would become my grandmother.
The very next February, 1918, their first child together, a daughter, Dorothy was born. Birth certificates in Cabarrus County show two sons born to Dunc and Lottie, that apparently died as infants, as I have not yet found the records to them. R. V. Burris was born on March 11, 1921 and R. U. Burris was born November 2, 1922. Finally, they had a son with the initials R. V. that made it. Ray Von Burris was born February 17, 1924. He would be the youngest child.

Lottie would die in 1935 of psychosis, with pellagra as a contributing factor, at the age of 48. She was also likely a heavy drinker, especially if Duncan's previous behavior continued or intensified. 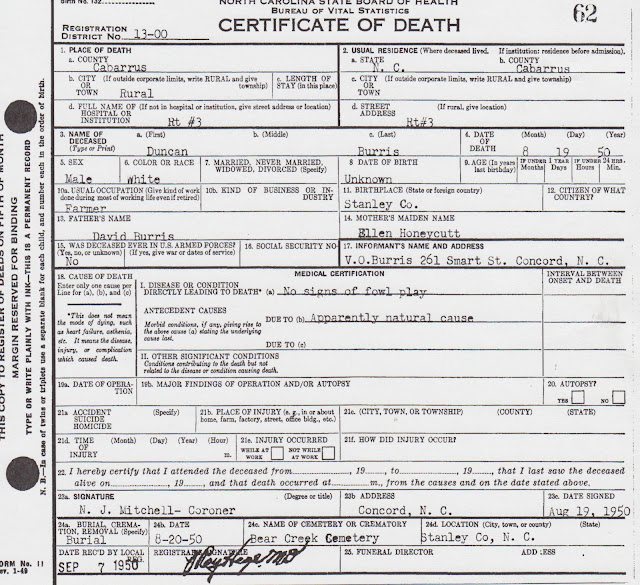 Drunken Duncan lived an uncharacteristically long life of 75 years. The Cabarrus County coroner must have known a few things about this guy, as you can almost hear the surprise in his voice while writing the words beside due to as "Apparently natural causes". Like Dunc was the poster child for an unexpected unnatural cause.

Duncan Burris, my great-great uncle and evil stepfather of my grandmother's childhood is buried at Bear Creek Cemetery, around a grove of other Burris's. God only knows where his soul is.
Posted by Jobs Children at 7:54 AM