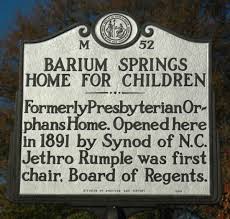 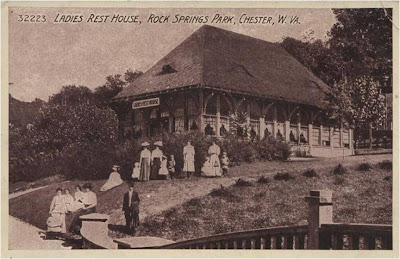 During the Victorian Era, into the early years of the twentieth century, natural springs were a draw for health conscious citizens. Various mineral springs throughout the Carolina's, and other states, were turned into resorts areas, complete with cottages and hotels for visitors to stay and take advantage of the health benefits of the springs. In 1891, the Barium Springs Orphanage in Iredell County, North Carolina was opened in one of these abandoned hotels.

When Jennie Lenora McSwain Davis died, her youngest child was sent to live with her uncle and his wife in Albemarle, North Carolina. Her husband remarried, but when he died just a few years later, his young pregnant bride returned to her parents home and 4 of J.T.'s and Lenora's children were sent to the Barium Springs Home for children. The oldest son Ray, was 18 upon the death of his father, and stayed in Vass with his older half-brother Dewey. Dewey would later to move to Durham, but Ray remained on his father's farm and raised his family there. In 1932, the middle four, Christine, Maxine, Woot and Esau, were between 15 and 6 years old. They were here during the 30's and into the 1940's and may possibly be among these children in the photos.

By  the 1940 census, the girls had graduated from Barium Springs and had went to Winston-Salem, North Carolina to work in the cigarette factories, which was a growing industry. Christine would marry that year to a young man from Tennessee, Harvey Joy Cantrell. Woot and Esau would join the military when they came of age.

Old Hotel at Barium Springs turned into a school and orphanage.


The Civil War ,and the years of struggle afterwards, had produced a large population of orphaned and unwanted children. The years from 1870 to the 1920's were known as the 'Golden Age' of the the Orphanage Movement, when concerned citizens came together with government and religious organizations to provide homes and care for these poor, homeless children. In North Carolina, 16 schools were started, most of them by religious organizations or charitable groups. Among these were the Thomasville Baptist Children's Home, the Masonic Orphanage in Oxford, and two Methodist Homes, one in Raleigh and another  in Winston-Salem. The home at Barium Springs was started by the Presbyterians.

The home originally began in Charlotte, North Carolina. In 1883 a Presbyterian Ladies group started a home for orphaned and abandoned children. Five years later, they asked the Synod to take over the running of the home. Jethro Rumple, a minister from Salisbury, headed the new commission as Chairman. He is known as the "Father" of Barium Springs and served as its chief promoter and organizer. The board then purchased an empty Resort Hotel from Davidson College in Barium Springs. There were several natural springs in the area, but the site of this one particular set was said to have a heavy fill of this mineral. In the winter of 1891, the Superintendent of the school arrived with twelve children from the Charlotte area.

The old Hotel would soon burn down, but then using insurance money, the Presbyterians were able to build a brand new orphanage. Within two decades, it would expand to 8 buildings. 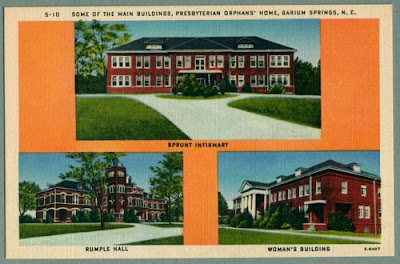 I am glad the Orphanage was available to the Davis children, but also saddened that they were split up from the older and younger ones, and sorry that a relative was not able to take them in.

Posted by Jobs Children at 3:10 AM