On January 26, 1899, my great-grandfather, Eli Lambert, applied for the marriage license of his 19 year old brother-in-law, Duncan Burris, and a young lady named Dollie or Dallie Burris. 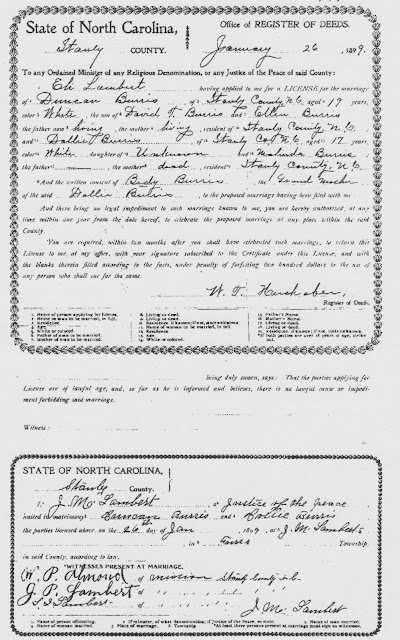 Dollie lived her entire short life between the 1880 and 1900 censuses, and appeared in neither.

It took quite a bit of research, and help from a fellow Burris researcher or two, to narrow down the possibilities of who she was.

Her mother was listed as Malinda Burris, with father unknown, meaning she was an illegitimate child. Permission to marry, as she was only 17, was given by Beadie Burris, her grandmother. Knowing that Beadie was short for Obedience, the hunt was on. Malinda Burris was dead upon the marriage of her daughter and Beadie was alive. So I was looking for an Obedience Burris, who was still alive and living in the area in 1899, who had a daughter named Malinda, who was alive in 1881, but not alive in 1899. There were several Obedience Burris's in the records of Stanly County, 3 or 4 Dollie's or Dallies, as the handwriting is not clear, and about 3 different Malinda's.

The Beadie, who was still alive in 1899, and who had a daughter named Malinda, who was not, turned out to be Obedience Hathcock Burris, who married Gideon Greene Burris, Sr. Their daughter, Malinda, died in 1882. There is not a great deal of young Dollie outside of her marriage license.

Duncan Burris married Naomi "Omie" Almond, a widow, the next summer, in 1900. She divorced him after having 2 children, Carl and a daughter mentioned in the divorce papers who died. After the divorce, he married another widow, Lottie Hill Lemmonds, my great, great grandmother.

In the absence of divorce papers, it is only natural to assume that Dollie Burris, who married her first cousin Duncan, died prior to July 1900, when he married Omie. Since the divorce of Dunc and Omie took several months, over a year, I am not very hopeful on finding divorce papers for Dunc and Dollie.

Certain researchers have listed Dollie as a child of her grandparents, Giddy and Beadie Burris, but Beadie was much too old to be her mother. She must be listed in a will or estate papers of her grandparents. I am searching for them now.
Posted by Jobs Children at 11:50 AM