The counties of North Carolina, just as in the counties of any other state, were not mapped out at one particular time. The boundaries were in constant flux, as smaller counties were cut off of larger ones, and sections of land were fought over, just as in the boundary problems of the states. North Carolina was no different. My homeland, Stanly County, was not born until 1841. Before that, she was part of Montgomery, and prior to 1799, Montgomery and Stanly were a part of Anson, and at one time, the whole thing was Bladen.

It is important to know when all this happened, when you are researching a family, because records can be in more than one county, even if your family was more or less sitting still. And if they were a boundary family, like my Starnes or Lemmonds, records can be all over the place. They lived pretty much where Cabarrus, Stanly, Union and Mecklenburg all come together or at least close to each other. Records have bee found in all counties. Graves too.

Knowing that Union, the central breeding ground of the Starnes tribe, did not become Union until 1842, carved off of parts of Anson and Mecklenburg, helped me to know when to look in Mecklenburg for records, and when Union. They did not seem to hover near Anson.

Sometimes townships, or communities did not stay in their original county, even after the boundaries were formed. Hoke County was born in 1911, and that was where the farm of John T. Davis was located, in the Little River community, at one time. When the Fort Bragg Reservation was formed, it cut Little River off, which was north of the military reserve, from the rest of the county. Eventually, Little River became a part of the county bordering it, Moore. The citizens there went to the town of Vass for business anyway, to see the doctor, go to church or for other purposes. So some records are located in Moore, others in Hoke.

Below is a progression of how the old North State got her counties. 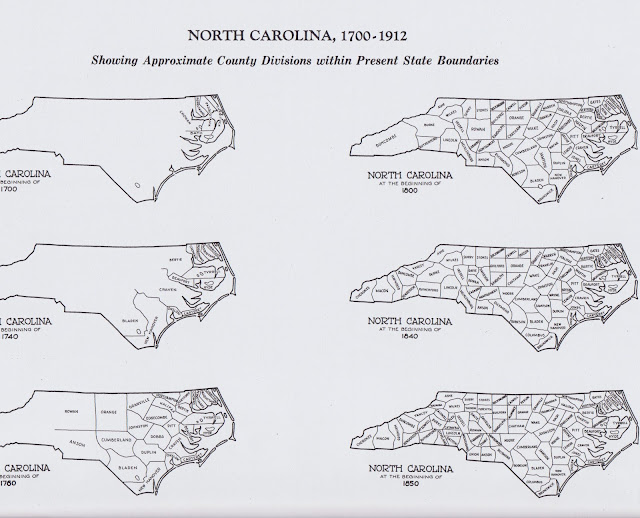 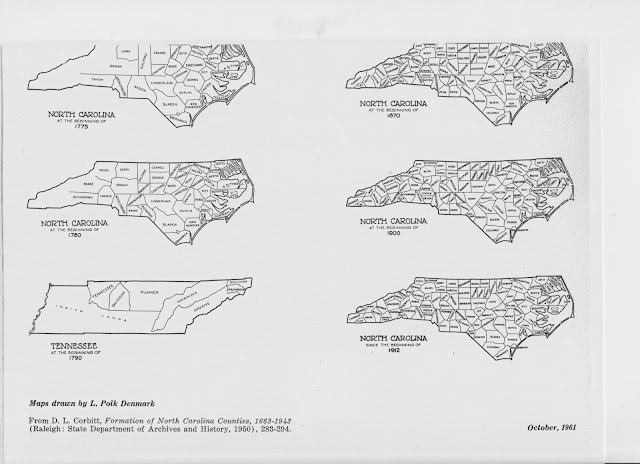 Posted by Jobs Children at 4:57 AM