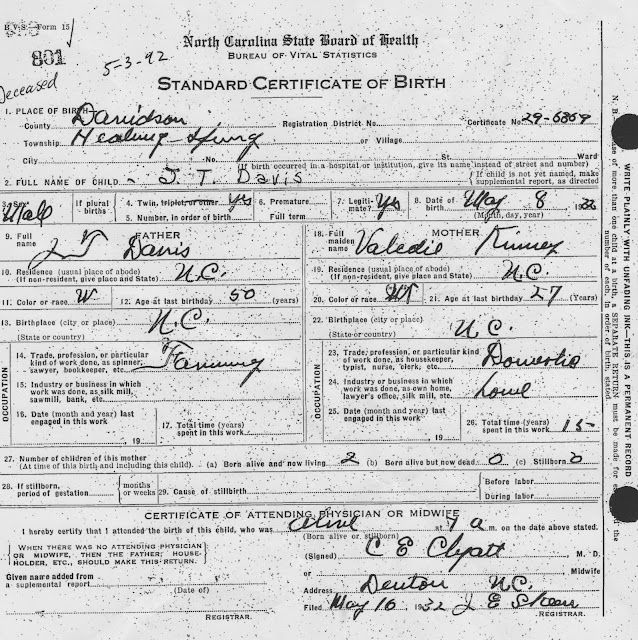 James T and Jenny Lee Davis were born May 8, 1932. They were the twin children of John Teeter Davis and his third wife, Alta Valedia Kinney of Healing Spring, Davidson County, North Carolina. Their birth certificates tell some of the sad story, just in the information included. On Jenny Lee's birth certificate, under where it lists the profession of her father as a farmer, it says "Died in January". 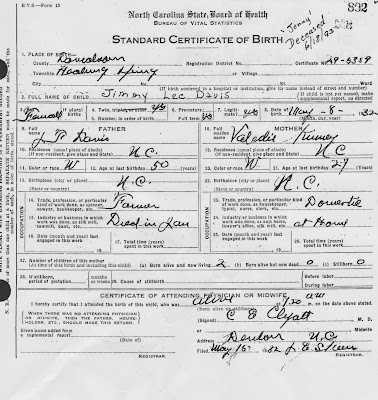 The twins were born posthumously, 4 months after their fathers death.


John Teeter Davis was born May 30, 1877. His own father died while he was very young, in 1882. He was the son of the second sheriff Stanly County, Edward Winfield Davis, whose family called him Ned and his young wife, Rebecca Hathcock Davis.

At 26, J. T. married Nannie Farmer, daughter of a local family, George and Betty Farmer. They had one son, Dewey, and Nannie must have died between the time the census was taken in 1910 and when J. T. married his second wife in December 1912.

J. T. and Jenny Lenora Hooks Davis had several years together and 6 children, Ray, Christine, Maxine, William Woot, Esau and Jewel Lee. Lenora died shortly after the death of Jewel Lee in 1929. J. T, who had moved from Stanly to Hoke county, took his infant daughter to his half-brother, Travis Crump, to raise, as his wife Mary, had 2 teenaged daughters to help her care for an infant. There he met their boarder, Valedia Kinney.

The Davis twins never married and are buried side by side. Their obituaries seem to insinuate that they had some sort of handicap, as their uncle, John Pinkney Kinney, who was 22 years their senior, was their caretaker.

Also listed are several new half-siblings that are not the children of J. T. Davis. They must be children of Valedia born after the twins. 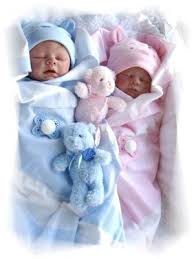 There are still several mysteries surrounding the twins. Why did they never marry? If they have a handicap, requiring a guardian, what was it? Why do their mystery half-siblings all have different last names? And where did J.T's still minor children with Lenora go after his death. Ray and Dewey remained in the area and were on their own and Jewel Lee went to the Crumps, but where did Christine, Maxine, Woot and Esau end up?

I called the Pastor, a Rev. Davis, of the church next to the cemetery where they are buried. This was the next step in my search. The early 90's were not so long ago, that maybe some of the elder church members might remember the Davis twins.
I found out a few things about the cemetery by talking to him. First, the cemetery predates the church.
The Clear Springs community existed first, the cemetery being the community cemetery and the church being named for the community.
Now to wait. Maybe someone knew the Kinney family of the Springs area and remembered the twins.