The Estate of Gideon Green Burris 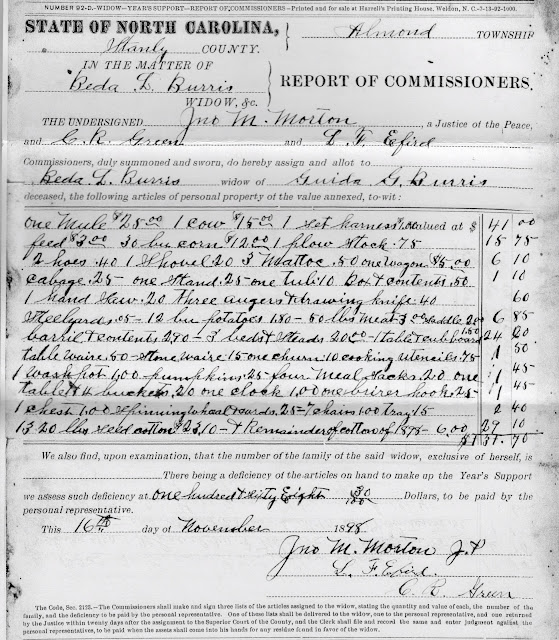 My ancestor Gideon Greene Burris was born October 4, 1831 in Stanly County, North Carolina and died November 7, 1898 in the same.  At 19 years old he took a bride of his cousin, Obedience Hathcock, known as Beadie, daughter of Benjamin Franklin Hathcock and Nancy Ann Burris. G. G. Burris was the son of Solomon Burris, Jr. and Sarah Morgan. His grandfather, Solomon Burris, Sr. , a Revolutionary War Veteran, was the patriarch of a large family of Burris's in and around Stanly County and beyond. The name began as, and is also seen as Burroughs.

Gideon Greene Burris was likely named for Gideon Greene, another early settler in the Stanly/Anson/Union/Cabarrus area. There was a Gideon Green and a Gideon Green, Jr. They were closely connected to the Austin family, which also had close connections to the Burris's and to the Morgan's of the Morgan Mill area, south of present day Oakboro, from which G. G. Burris's mother Sarah came. They were likely a group of Baptists with ties to Haynes church, a very old church in the area in Revolutionary War days, and located close to a Green cemetery.


I have also seen John Wright Burris attributed to Gideon Green and Obedience Hathcock Burris, but his parents were Allen Burris and Lucy Hinson Burris.

G.G Burris, Sr and Beadie Burris also raised their grand-daughter Dollie Burris born in 1881. She was the illegitimate daughter of their daughter Malinda, who passed away not long after her birth. I have seen her attributed to them as well, but they were her grand-parents. Dollie married David T Burris's son, Duncan, when she was 17. She died within a year later.