Here is a lesson learned.

Always write names and dates on photographs and portraits, and include labels in your electronic ones, so 100 years from now, when one of your descendants are looking through them, they will know who is who and when, what and where. 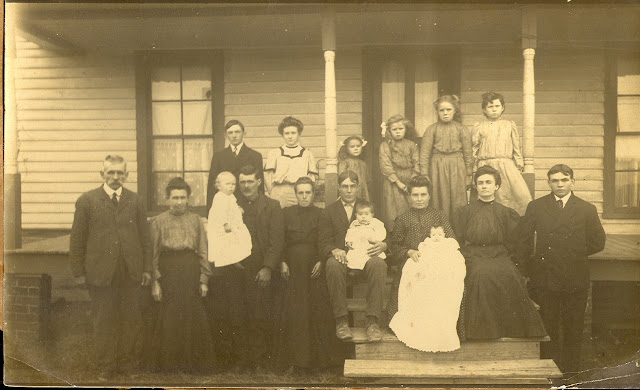 This family may or may not be Honeycutts or Whitleys, or have ties to a Honeycutt or Whitley. They most likely lived in or around the Western end of Stanly County. Oakboro, Big Lick or Saint Martin area. The older gentleman on the left looks like the possible patriarch of the family. The woman next to him could be his wife, but upon close examination, there is a strong family resemblance between the two and she could be his sister. Sometimes when a wife died, a maiden aunt would join the household to supervise the children.

Not only do these two stand alike, they have the same brow ridge and deep-set eyes, shape of face and identical noses. Another possibility is that they are first cousins, hence the resemblance, and also spouses, which was not uncommon in those days.

The couple to the left of the older couple, with the man holding the baby are likely also a married couple, as is the couple with the two babies to their left. One of the young girls in the back is the spitting image of the woman in the first couple with the one baby. The smaller girls to the side of her may be her sisters, but the taller girl to her left looks nothing like her and may be the daughter of the woman she stands behind.

If anyone recognizes these faces from the Victorian era in old photos of theirs and can put a name to any one of them, left me know. Again, they may be from Stanly County, or just have relatives in Stanly County.

Posted by Jobs Children at 2:42 AM