Among the surprises in my family land records, I came across this surprising document, wherein Sarah Kennedy mortgages a piece of land, as well as a woman and three children, to my ancestor, EW Davis, for $1.00.  This may not seem that unusual seeing that the year was 1856, and prior to the Civil War. What makes it so eye-catching is knowing who Sarah Kennedy was. There is a sum of $150.00 mentioned in the document involving Josiah Hatley. It is going to take some interpretation to decipher what the purpose of the deed was, as a great deal of property was mortgaged for a mere dollar. It may have had something to do with the rights (or lack of) women in those days, and E. W. Davis, being the gentleman that he was, taking possession, temporarily, of her property, in order to protect it from take over of not so congenial gentlemen.

This is a link to a post where I had blogged about Sarah Kennedy and her unusual situation.

It had appeared that Sarah died leaving 4 young children orphaned, who were bound out to neighbors and local farmers to 'learn the art' of farming. This happened often, especially with children who were illegitimate. One of her sons, Robert, would marry the younger half-sister of my great-great grandmother Julina Aldridge Davis.

The woman that Sarah Kennedy mortgages out, is an 18 year old girl she calls "Sall". As young as she is, Sall is the mother of two little girls, Mariah and Harriett. The year is 1856.  Sall's daughters must have been mere babies. I had pegged Sarah Kennedy, daughter of John C and Mercy Daniel Kennedy, as the mother of Robert Kennedy/Canady and his siblings. Then the name "Harriett" rang a bell.

The 1870 census of Stanly County has Sarah and her children labeled as white.
I located the document where Robert and his brother James, who was just a 2 year old toddler at the time, was bound out to a local farmer, Michael Dry, to learn the art of farming about 1877. In the 1880 census, Robert and James are enumerated in the household of Michael Dry.
They are also called "Mulatto", meaning of mixed heritage.

In 1884, Robert marries Matilda Aldridge, who is also labeled mulatto on the marriage license, but her mother was considered white, although of Native American and Scottish heritage.

Then, I was in Cabarrus County, doing research on the Kiser family, and I came across a document that caught my eye, Thomas Canday's marriage to Jemima Means. I am a descendant of a Harriet Means Lemmonds, and have not researched into that line as of yet, beyond straight up the trunk of the tree. So I thought I'd take a glimpse to see if Jemima was perhaps a sister of Harriett Means. If you notice in the census record above, the name Kennedy was interchangeable with Canaday or Canady in those days. In fact, Canaday become the permanent spelling for Bob and Matilda's descendants.

While researching the descendants of my great-great aunt Matilda, I came across Bob's death certificate. On it, his mother was listed as Sarah Canady and his father as Jordan Kennedy. I thought, this has to be an error, Jordan was his uncle, the brother of Sarah Kennedy. I had assumed that Sarah was white, and the father of Bob and his siblings was black. 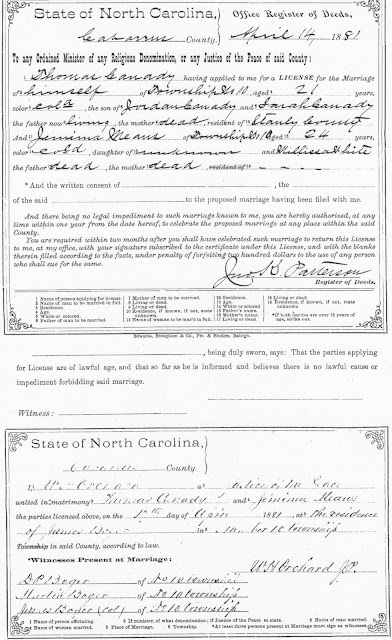 Thomas Canaday, a resident of Stanly County, in 1881 marries Jemima Means. He is the son of Jordan Canaday, living, and Sarah Canaday, deceased. Somehow, Thomas did not show up in the 1870 census with his siblings. Not that I have found yet.

Then, I thought about this document. Sall is short for Sally, is a nickname for Sarah. Could there have been 2 Sarah Kennedy's? One born a slave and the other her owner? Harriett was definitely one of Robert's sisters and Sarah's daughters. I found a record in Cabarrus County of someone whose mother's maiden name was Mariah Canady. Could Thomas and Mariah, the older children, have left Stanly as children and went to live in Cabarrus County?

Thomas and Jemima had a close connection to a Boger family. Both are living with a Boger family in 1880. While Bob moved his family first to Rowan and then on to Davie County, Thomas and his wife ended up in Philadelphia. Further research may find out more about them.

Thomas first shows up at 20 years old in the 1880 census, that I can find:
Living with the Bogers and here he meets his wife and they marry the next years. His marriage license pronounced him from Stanly County.

Twenty years later, he and his wife are still in Cabarrus County and a member of the Boger family is living with them. If they had any children between 1880 and 1900, they did not show up.

By 1920, the couple have moved to Philly, where they probably spent their last days.

Jordan Kennedy of Davidson and Stanly County was known to leave a trail of illegitimate children. He was brought up on bastardy bonds in the early courts of Stanly County on more than one occasion.

So were there more than one Sarah Kennedy/Canaday? Was Jordan the father of all of her children? How many did they have in total? Was the 'Sall' mentioned in the above document, who was mortgaged to my ancestor EW Davis, Sarah, mother of Thomas and Robert? If so, the list of children would be Mariah, Harriett, Thomas, Robert, Alexander and James.

I know that Alexander also ended up in Cabarrus County, living with a Bost family. They may have been of some relation.
Alex may have been this Alexander Canady who moved to Winston-Salem and married a Sallie. The name Alexander is often shown as Aleck or even Ellick.
A trip to the Forsyth R.O.D. is in order.

Posted by Jobs Children at 2:53 AM