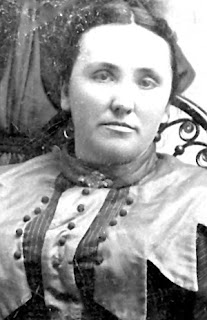 The above plenus Victorian lady is Julia Ann Eudy Kirksey at around 40 years old. Julia Ann enjoyed a bit of travel in her days and an interesting life.

In my search of the Julia Ann Eudy who was the mother of Martin L. Lambert, I am leaning toward this Julia. The first reason is that there were only two in the community at the time who would have been old enough in 1873 to be his mother, and she was 16 years old. The second reason is that 1873 is the year the family seemed to have migrated to Arkansas, and may have placed young Martin with the neighboring Lambert family to raise. Whether William "Buck" Lambert was his natural father may be a fact that will never be discovered. 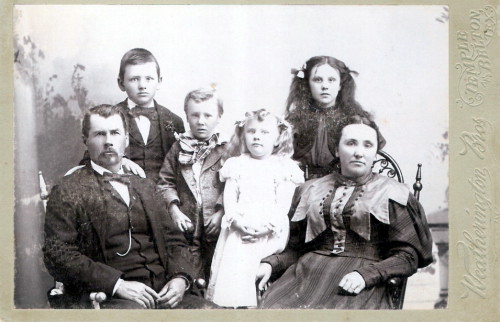 But the last, and most telling reason for my belief that the future Mrs Kirksey was the mother of Martin is that in the 1900 census, it records how many children a mother has given birth to, and how many are living. In 1900, Julia has given birth to the children in the above photograph, left to right, Robert Cicero Kirksey b 1884, Washington Henry Kirksey b 1891, Addie Belle Kirksey b 1893 and Mary E Kirksey b 1886. She had not given birth yet, to her youngest child, Annie Mae, and may very well have been expecting her in this photograph.

The census records that in the spring of 1900, Julia Ann Eudy Kirksey was the mother of 5 children with 4 living. The above four all grew to adulthood and had families of their own. Martin L. Lambert died in 1892 at the age of 19, but leaving a young wife and 4 month old daughter, Lotha Elizabeth Lambert.


This is the document that gave cause to my search for Julia Ann. Martin L Lambert's marriage license to Rose Etta Starnes. His mother was Julia Ann Eudy, no father listed, but listed as "living". So, he knew who his father was, he just did not list his name. It is remarkable that he did not list the Lamberts as his parents as his last name is Lambert and he is enumerated in the 1880 census as their son and the youngest child at 7, living close to the family of his future wife, Etta, age 6. They must have played as children.

Julia Ann Eudy Kirksey was born in either Stanly or Cabarrus Counties in North Carolina on May 28, 1857. She was the daughter of Jacob Wiley Eudy and his wife, Elmira Belinda Furr. The marriage license for her parents was recorded in the Albemarle Courthouse in Stanly County on April 13, 1854. Land transactions involving Jacob Wiley Eudy begin about 1856, in both counties as he begins acquiring land for his farm on which to raise his typically large family, of the time.

The Eudy's hovered on the border of Cabarrus and Stanly. In a deed recorded in Cabarrus County in April of 1871, J.W. Eudy and his wife E. B. Eudy sell to an A. B. Coleman a tract of land "situated in the counties of Cabarrus and Stanly adjoining Joe Barrier, John Eudy, Williamson Eudy,  and others". Other neighbors mentioned are M. W. Dry and Jacob Misenheimer.

As both A. B. Coleman and Jacob W. Eudy are shown as grantors and grantees in adjoining documents, it appears they were trading tracts of land. Perhaps to locate in one county over the other. Jacob W. Eudy preferring to be in Cabarrus and Coleman in Stanly. This might have something to do with a April 27th 1870 court order from Stanly commanding James Marshall, sherriff to attach a levy to 369 acres of Jacob W. Eudy's land on Bear Creek adjoining the heirs of Soloman Harkey and sell at the courthouse to the highest bidder, the highest bidder being one Miss Adeline Eudy for $85.

Another fact that can locate the Eudy family in North Carolina and then in Arkansas is the birth of daughter Jennie Rose Eudy on October 7, 1870 in Cabarrus County, North Carolina and then her death in Pope County, Arkansas on September 12, 1873. She is not buried in the same cemetery as most members of the family who remained in Arkansas. Then another daughter, Minnie Lorena Eudy, was born a few days later on September 12, 1873 in Dover, Pope County, Arkansas. It appears 1873 was the year of travel for the family, young Jenny Rose may have gotten ill on the trip.
The 1860 census shows the Eudy family near Mt. Pleasant. Land records show most transactions from 1854 to 1856 in Stanly and then later transactions 1856 to 1871 in Cabarrus. 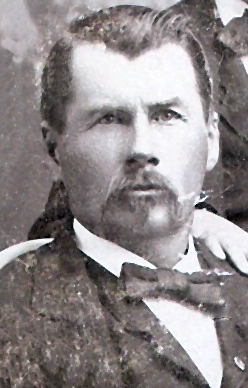 Matt was the son of John Madison Columbus Kirksey and Martha A Thompson Kirksey of  Choctaw, Alabama. The Kirksey family had originated in South Carolina before migrating to Alabama, and like the Eudy family, had relocated west to Arkansas during the horrors of Reconstruction. Matt had married an Alabama girl, Sarah F Cooper in 1870 and they had 3 children, Ophelia, Jackson and Fanny.

One year after the marriage of Matt and Julie, their first son Robert Cicero was born. Robert would marry a Mary Estelle in Bell County, Texas and have 2 sons, Robert Jr. and John M. Kirksey. Second child, daughter Mary, would also be born in Arkansas in 1886. 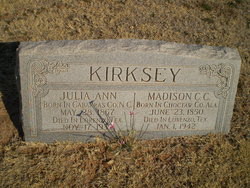 Mary E. Kirksey would marry Jonas Lucena Barringer, whose family was also from Stanly and Cabbarus Counties in North Carolina. Jonas was born in Ridenhours township in Stanly County, North Carolina. In 1880, his family was still in North Carolina and were in Llano, Texas by 1910. He joined the Service for WW I in 1918 in Lubbock, Texas. He and Mary would have 4 children, Catherine, Annie, J. L. and Julia and relocate to Portland, Oregon.

Third child, Washington Henry Kirksey was born on May 1, 1891 in Arkansas. He would marry Elizabeth Atkins of Anderson County, Texas, and they would remain in Crosby County, Texas, where his family would migrated from Arkansas to, and raise his only daughter, Julia Annadale Kirksey.

There appears to have been a daughter, Arlene, who was born and died  between 1900 and 1910. The 1910 census shows Julia Ann to have been the mother of 7 children with 5 living.

The fifth and youngest child of Matt and Julie Kirksey was Annie Mae, born June 21, 1900. She was the first and only Kirksey child to be born in Texas, so they migrated from Arkansas between Addie's birth in 1893 and the 1900 census.

Annie Mae's first photo was made in Temple, Texas. 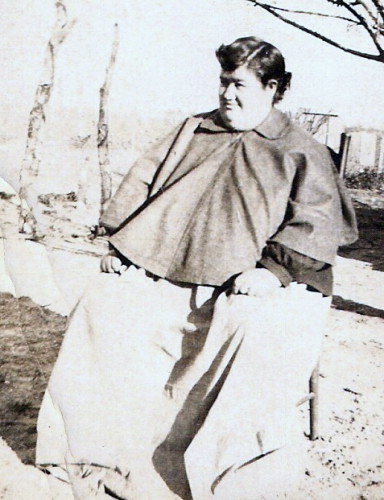 Like most Americans born around the turn of the century, the Kirksey children came from large farming familes, and as they settled more into towns and trades, they brought smaller families into the world in the World War and Depression eras. Annie Mae and Burt were no different. They raised their 2 sons in the town they were married in, Crosby, Texas, where Matt and Julie had settled.

Julia Ann, born in Cabarrus County, North Carolina, was laid to rest in Crosby County, Texas November of 1937. She was part of just one family who migrated west following the Civil War in search of a better life from a decimated origin. Was she the mother of Martin L. Lambert? Was he her child who was no longer living in 1900? Did Lotha Lambert know who her grandmother was? She also migrated to Texas. Did they keep in touch. Only a living descendant of this Texas branch of a North Carolina family might have the answers. 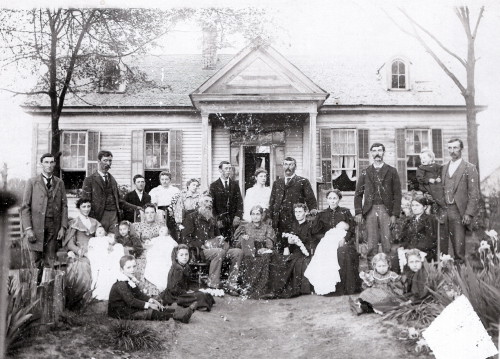 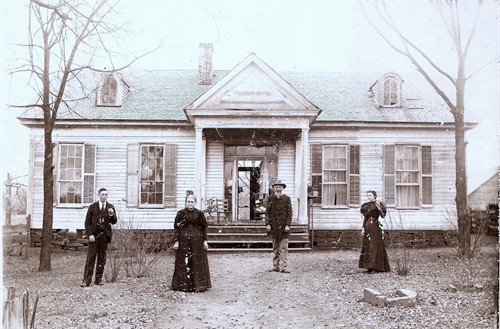 Eudy house in Arkansas circa 1890 with Jacob, Elmira, Minnie and J. J. Eudy