In the 1880 census of Almonds Township, Stanly County, North Carolina the family of William "Buck" Lambert is enumerated next to the family of Allen (Allen Mack Daniel or A. M. D.) Starnes. Also close by are Herrins, relatives of Buck's wife Talitha (or sometimes called Matilda) Herrin Lambert and other Lamberts, relatives of Buck.
In Buck's home is 7 year old Martin, listed as his youngest son. In Mack (or Allen) Starnes's home is 6 year old Rosa.
1880 census showing Starnes and Lambert families

These two children, Martin L. Lambert and Rose Etta (known alternately as Rosa or Etta or Etty or even Rosetta) Starnes grew up to marry. The wedding took place in Stanly County and the license recorded at the Stanly County Register of Deeds in Albemarle, North Carolina.

In the old Lambert Community of Stanly County, in the Almond's township is Lambert  Cemetery #1, an old family cemetery. This is where William Buck Lambert  b 10 May 1824 d 19 April 1897, was laid to rest. He was one of my 3rd Great-Grandfather's. His son Rufus A. Lambert had a son named Elias Marion Lambert who had a son named Burley Melvin Lambert, who was my paternal grandfather, or...my Dad's Dad.

Lying next to Buck is his youngest son Martin, born March 5 1873 and died November 18 1892.
Profile of William Buck Lambert

Martin was only 4 months shy of his 20th birthday. He did however, leave descendants. He and Rose Etta married on January 18, 1891. Martin was 18 and Rose Etta 16. A year and a half later, on July 18, 1892, their daughter, Lotha Elizabeth Lambert was born. Martin saw his daughter. She had just turned 4 months old when he died. Of what the still teenaged Martin died from is unknown. But otherwise, cut and dried, sad story of a too short life.

But no, and herein lies the mystery. On the above marriage license, it lists Martin's mother as Julia Ann Eudy and no father.
Lambert researchers have all assumed that Martin's mother was Talitha Herrin Lambert, Buck's wife, as the boy is enumerated in their household and buried next to his father. Could the Martin who grew up next door to Rose Etta Starnes in Lambert be the wrong Martin?
There was another Martin Luther Lambert who lived in Stanly and Cabarrus Counties during the late 19th century. But he married someone else and lived a fairly long life. He was not the right Martin. 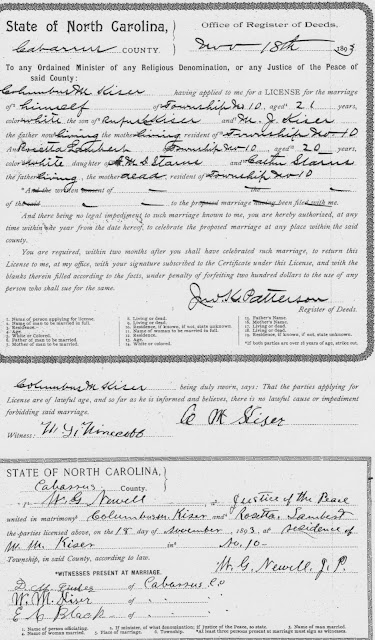 By the 1910 census, Rose Etta and C. M. Kiser have had 7 children and are living in the Bethel Church area of Cabarrus County. Seventeen year old Lotha E. Lambert is living with them. 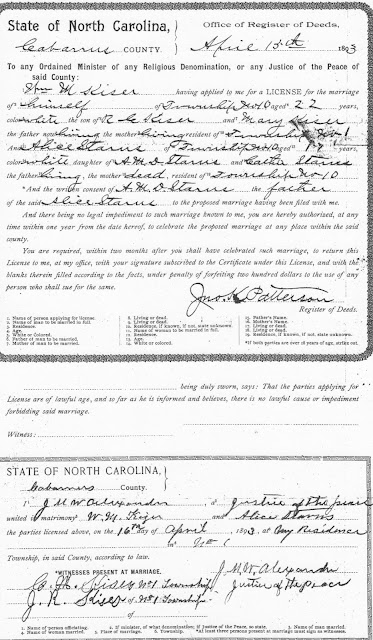 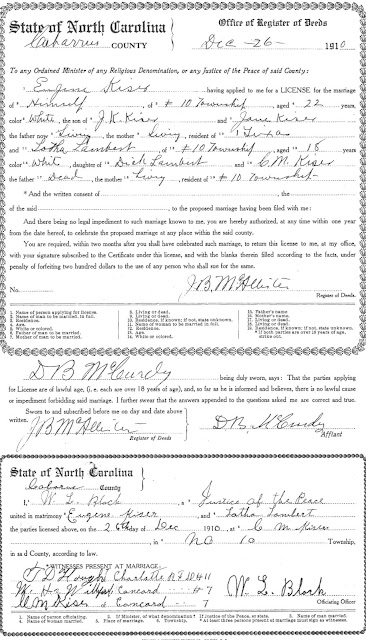 And so does her daughter Lotha Lambert. Eugene C. Kiser, the son of C. M's uncle Jonah, returns from Sylvester Texas to marry his step-cousin Lotha in 1910, and take her with him back to Texas where they raise a large family of their own. The marriage license erronously lists her father as "Dick" Lambert and her mother as C. M. Kiser. They may have meant "Mrs." C. M. Kiser, as C. M. was a male and her stepfather. Perhaps Martin Lambert was known as Dick, but his middle initial was L.

Lotha's death certificate was correct in listing her father as M. L. Lambert and her mother as Rose Etta Starnes.

Posted by Jobs Children at 5:36 AM