The Murder of Robert Starnes 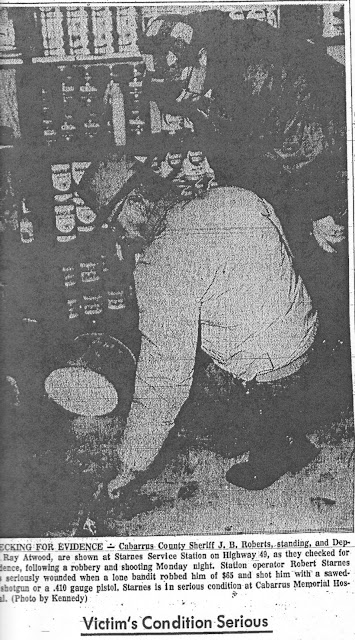 Every family tree has a tragedy or two in it. Mine seems to have more than it's share. I've been researching the family of my 3rd Great-Grandfather, Frederick Fincher Starnes recently and have several posts relating to him and this branch of my family tree. F. F. Starnes was a confederate veteran who had lived in Lancaster District, South Carolina before moving his young family of a wife and two young daughters back to Union County, North Carolina near his father, also named Frederick. The entire family, including the elder Frederick, who also was the son of a Frederick, then relocated to area of Cabarrus County near Pioneer Mills, or Rocky River Presbyterian Church. F. F. Starnes would have a son after moving to Cabarrus, whom he also named Frederick, but with the middle name of Lafayette. He became known as "Fate". Fate met a girl named Beadie Starnes, daughter of Rufus Starnes, who was working for his father in Charlotte, NC as a housekeeper. She was likely a distant relative. They married and raised their children on the family land passed down from father Finch, in Cabarrus County, North Carolina. Fate and Beadie would raise their large family of 9 children in this area. Several of their children remained in this same area, around Harrisburg and Midland and Mount Pleasant, or they moved to the Siler City and Robbins area. They heavily married into the Maness family of Moore County. Robert Lee Starnes, born in 1923, was their youngest. Upon reviewing his unusual death certificate, I knew there had to be a story behind this violent cause of death. Seeing that he operated a Service Station, my bet was on a robbery. And I was right. 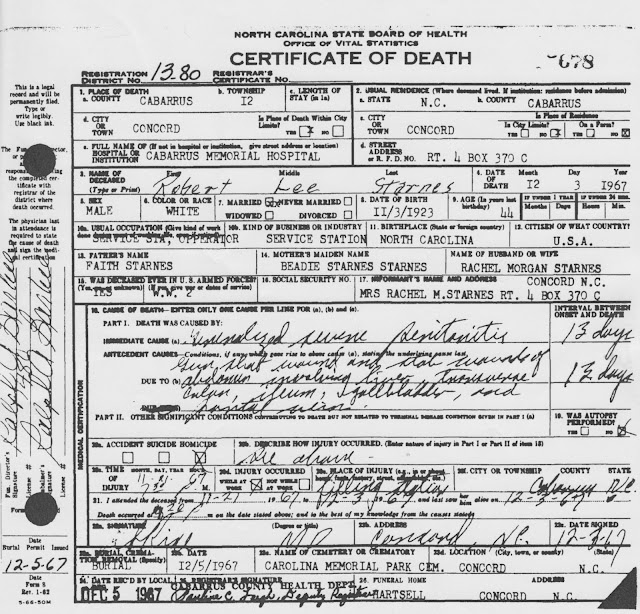 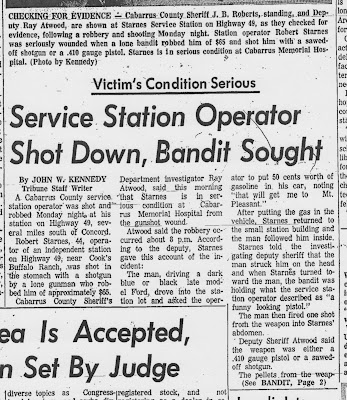 Seeing that his condition had began 13 days prior, I found the article concerning the violent robbery in the November 21, 1967 edition of "The Independant Tribune", of Concord, North Carolina. He eventually died of his injuries and his obituary appeared in the December 4 edition of the same newspaper.

Robert owned and operated his own Gas Station, near his home along Hwy 49 between Harrisburg and Mt Pleasant, very close to where the family had been situated for decades. It is described as being near the Buffalo Ranch, which was a western store and roadside attraction I loved to go to as a child. They had a stagecoach ride through a meadow full of buffalo and beefalo, some talented goats, dancing chickens and a few caged cats, in addition to a Western wear store where you could find the best cowboys boots this side of Lebos and Indian dolls like the ones they had in Tweetsie.

Bob Starnes must have seen the business this attraction pulled in and had hoped to capitalize upon that traffic.

He and his wife Rachel had 3 sons, one who was serving in Vietnam when his father was killed.

He was robbed and murdered by a young man named John William Hinson, a 29 year old Air Force veteran. Who was this young man? He must have had known mental problems, as he was sent to Dorothea Dix, a hospital for the mentally ill. Perhaps his problems were war related.

Bill Hinson, as he was known, was born in 1938 and died at the age of 64 in 2003 in Raleigh, North Carolina, but he had been living in Peachland, Anson County, North Carolina. Not a long life, but not as short as Bob Starnes 44 years. The prime of his life. One son raised, two to go. Grandchildren he would never meet. A family that had to go on with this pain and this tragedy in their lives. How long did Bill Hinson serve for this crime? I don't know. I have not found an article that said he served any time at all.

Bob Starnes was able to live long enough to give the police a description of his attacker, and by the time Bob died, he was in custody. What made this young veteran, a man with no record until this incident and nearly 30, commit this heinous crime, steal the life of a man in his prime with a young family, for $65.00? Was Robert Lee Starnes an un-numerated victim of the Vietnam War?