The Howell's Part One: Richard 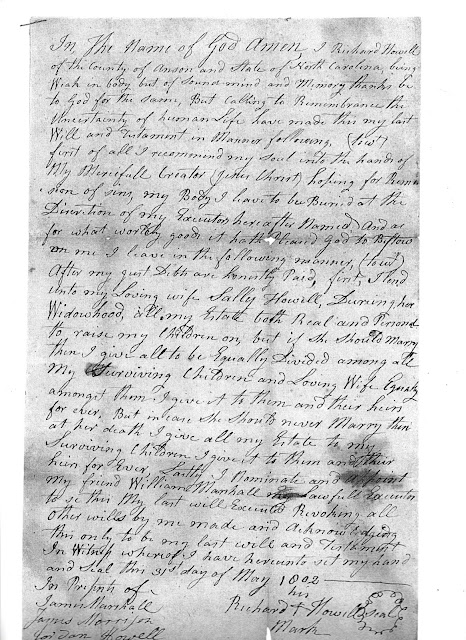 I began the Howell saga with Richard, the first known for certain Howell in this leg of the family. Richard was not a child of Job Davis. Instead, he was Job's wife's first husband and the father of Job's step-children.

Not a great deal is known about Richard at this juncture and some of what is known is basically assumed.

Richard does not appear in the 1790 census as a Head of Household. However, it would make sense that he was in the area at the time, as this is the year he marries Sarah "Sally" Winfield, according to the Southern Christian Advocate.

The first census that Richard does show up in is the 1800 census, Fayettville District, Anson County. His name is listed directly under that of his Father-in-law, Peter Winfield.

He mentions his wife Sarah or Sally:

"After my just debts are honestly paid, first, I lend unto my loving wife Sally Howell, during her widowhood, all my estate both real and personal, to raise my children on, but if she should  marry then, I give all to be equally divided  among all my surviving children and Loving wife equally."

He appoints his friend, William Marshall as executor. The Marshall family had close ties with the Winfields and migrated from Virginia with them in the 1780's.

Richard does not mention his children, but the 3 boys listed in the 1800 census were John W, Peter and Jordan. Exacting the direct birth order of these 3 might lend a hand in deciding the father of Richard Howell as the Winfield's and others of their ilk were exact in the naming strategy of their children. Daughter Charlotte was not born until later in 1800 or in 1801.

There is mention of an older Jordan in Fayetteville later, with Richards' sons John W and Jordan moving there while Peter stayed in Anson on the Rocky River, after buying his siblings share of their fathers lands. Charlotte married Levi Stancill and later moved to Newton County, Georgia.

One of them was likely the father of Richard and Jordan who witnessed his will was likely his brother.

Jordan would later migrate to Tennessee and end his days in Missouri. He seems to have been born in the early 1780's. But that is another post.

Richard was a young man who fell ill. His mention of love for his wife mulitple times in his will leads one to believe they deeply cared for each other. He seems like a wonderful, loving husband and father.

Posted by Jobs Children at 5:39 AM