The first time Albert Murray shows up in records is in the November 1842 Session of Stanly County Court minutes. The record states briefly, "Albert Murray, a mulatto boy, bound to John Norwood as above vide bond filed. Also bond not to remove said boy from without this state filed in apprentice bond."

The second time he shows up is in the 1850 census, at age 11, in the home of Mr. John Norwood, an older gentleman, and his family and Albert is listed "m" for race, meaning Mulatto. Albert is not the only young Murray living outside of his immediate family. Tyson community, it seemed had a fad of having young Murrays in the households, some mulattos, some not. Even some adult members of the Murray family had little Murrays living with them.

Ever curious, I wanted to know why.

I will go into the Murray family records later, but a quick breakdown is that Jesse Murray had two Stanly County sons (there are a few more dashes in early censuses of sons who may have died or migrated to another area at adulthood. I believe another Jesse Murray who shows up in Randolph County near the intersection of Rowan, Cabarrus, Stanly, Montgomery and Davidson is his son, but no definitive proof ...yet.) He had many daughters: Jane, the eldest, never married but had at least 3 children. Keziah married, but did not stay so long. She had 3 daughters out of wedlock. Elizabeth married Malachi Stokes McIntyre, Sophia married Samuel Nelson Whitaker, Phobe married John C Turner, Rebecca married Richard Poplin, Winna Julina married John Adam Pless and Priscilla married Garner Aldridge. All of those daughters married or had children with Caucasian men.  The Murray's were actually tri-racial, accepted as white, but called Indians. Priscilla had one child with an (amended, after researching his family, it appears he was "Croatan" as his family first shows up in Wolf Pit, Richmond County in the 1850 census as 'Mulato') African-American after the death of her husband, Matilda.

Then there was Moriah. Moriah had 4 sons and 3 daughters, all considered mulattos, and upon her death, the children were bound out, several to her siblings. They were named in her estate settlement: Ben, Mary Jane, Eliza, Albert, Lydia Adeline, William and Wesley. While I am still trying to track down the other siblings, some I may have, but with common names, I want a level of certainty. With Albert, I have that.

Albert ended up relocating to neighboring Cabarrus County with his Aunt and Uncle, Nelson and Sophia Murray Whitaker. So did his sister, Lydia Adeline. Adeline, as she was called, had 3 children, John, Malinda and Jenny. Malinda is only listed in one census, but I have been able to track John and Jenny. Both married, John twice, and both listed Pink or Pinkney Carpenter as their father on their marriage licenses. Pink Carpenter was the son of a Stanly County Tyson Township family, and shows up in 2 censuses and disappears. He may have died in his 30's, or relocated. I have not researched him well. Pink Carpenter was white, but John, Jenny (who married a Kirk), show up as mulatto's. Adeline later marries a man named Adam Faggart, who is listed as black.

Albert, on the other hand, marries his first cousin, Mary J Whitaker, daughter of Nelson and Sophia. And on his marriage license, his father is revealed. 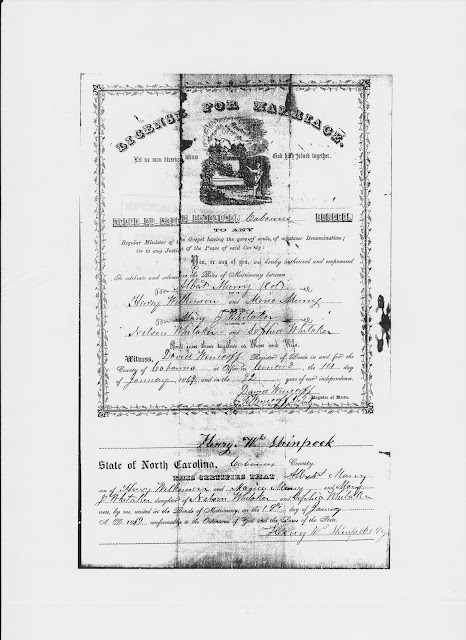 The thing about the Murray children is that they are listed in the 1850 and 1860 censuses. This predates the Civil War, when most people labeled mulatto were slaves, and not listed in the census. The Murrays were not the only family that the census takers did not know what to do with. The Manuels and Hedgepeths were also listed as mulatto's and they were related to the Murrays.

Mariah Murray was a free, racially-mixed but accepted as white, woman. She was not allowed to marry Henry Wilkerson, who we can presume was black, but they had 7 children over the course of about 16 years. Mariah's estate was settled in 1853, but I believe she died in the year 1850. Of what, we can only guess. Perhaps, like Sarah Kennedy, she was going against the grain. Perhaps someone did not like the fact of that. (New evidence seems to suggest Moriah died in childbirth).

Albert Murray must have had some features that caused people to take him as mixed, his cousin Mary Jane may have been a little dark-featured too, having Indian ancestry (that turns out to be tri-racial). I know of no photagraphs in extistence. Maybe if I can locate some living descendants, pictures will be available. 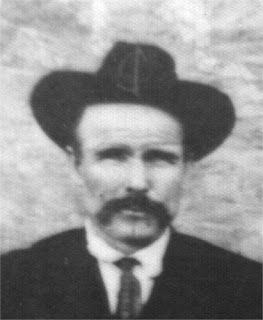 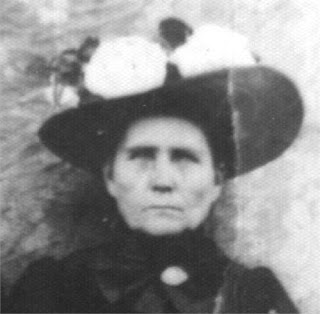 Instead, I do have pictures of John Adam Aldridge and Glennie Wilmartha Whitaker. Wilmartha is the sister of Mary Jane, and likely looked somewhat like her or favored her. John Adam Aldridge is not only the first cousin to his wife, the son of Priscilla (Prussia) Murray Aldridge and Garner Aldridge, he was a first cousin of Albert Murray too. As you can see, they look a little stalwart, but very Caucasian, if not somewhat Indian.
They too, ended up in Cabarrus County.
This is how the census listed Albert and Mary Jane, who by the way, lived right next door to her parents, who were listed as white.

This was Albert's first census, bound to the Norwood family. By 21, he had found work with the Railroad across the River in Anson, by 31, he had married his cousin, lived next to his Aunt, her mother, and started a family.
Then an odd occurance took place, Albert, who must have been born under a wandering star, moved just across the border of North Carolina (Anson and Union border South Carolina) and South Carolina and ends up living in Chesterfield County, a county many local families chose to get married in for decades. And there, he becomes a White Man.

He has also fathered a set of twins, a sure sign of being a Murray. Twins run in the Murray lines. My great-great grandmother, Julina, daughter of Garner and Prussia Murray Aldridge, was a twin.


Twenty years later, the family has relocated to Florence, South Carolina and are still white.

Albert does not show up in the 1910 census, but Mary Jane does, living with their son George. Everyone has still became part of the white world.
Albert was a "Passer" and crossed over. His living descendants may have no clue as to their African heritage. Albert was born at a time when it was MUCH better to be white than black or mixed. Better jobs, better treatment, the whole shumoozy.

So, thank you Albert Murray, for being searchable, for naming your father and for marrying your cousin, I could keep track of you. Rest in peace Cousin Albert the 'Passer'. You were light enough to have moved to another state and live as white. Now to find who Henry Wilkerson was.

Posted by Jobs Children at 6:13 PM