Edward Winfield Davis was born in Stanly County, North Carolina on December 3, 1811 and died on October 30, 1882. The Davis Plantation was located on the Rocky River, which forms the border with Anson County and during the time Uncle Neddy, as I will refer to him, was born, it was still considered Montgomery County. It did not become Stanly until 1841 and Neddy was one of the men to sign the petition to make "West PeeDee" its own county, due to the danger of crossing the Yadkin/PeeDee River, which forms the Eastern boundary of Stanly County and now separates it from Montgomery.

Neddy was the third son of Job Davis and seventh child of Sarah Winfield Howell Davis. The Davis family were Virginians, of Welsh decent and Methodist extraction. He had 3 older half-brothers, Peter Howell, John W. Howell, and Jordan Howell and one half-sister Charlotte Howell, children of his mother's first husband Richard Howell, and 3 full brothers Henry Davis (1806), James M. Davis (1808) and his only younter brother Marriott Freeman Davis (1815). Sarah had had a heavy hand in the naming of her children. She was the daughter of Peter and Charlotte Freeman Winfield. Neddy was the name sake of her paternal grandfather, Edward Wingfield. The Winfields dropped the 'g' after migrating to North Carolina.

E. W. Davis was the second sheriff of Stanly County. I remember somewhere having seen a portrait of him many years ago. I have yet to rediscover this portrait. I remember him being quite handsome and distinguished, tall and straight. His hair appearing brunette, but not dark in color. Being a black and white photo, I am judging it to be a sandy light brown. He wore a nearly handlebar moustache, but no other facial hair. He married late in life to Mary Rebecca Hathcock and fathered 5 children, one daughter Sarah Hortense Davis, his firstborn, and 4 sons, Thomas Ashe Davis, John Teeter Davis, Edward T Davis and Jaspar. Jaspar only lived one year and E. T. Davis died at age 15. Hortense, T. A. and Jay were the 3 children who outlived their father. Hortense died a young woman, but did marry and have one daughter Ouissa Stewart Hill. I have discovered that Ouissa is the lady in the article below identified as Mrs. Fred Hill.


In Job Davis's will, he refers to his son as Neddy, so this must be the name his family called him. As he was my great, great, great Uncle, I will always think of him as Uncle Neddy. 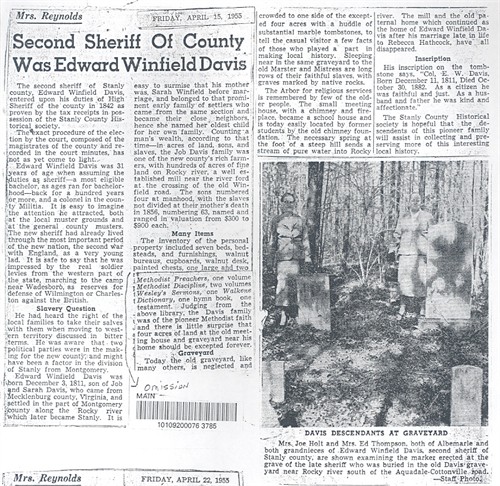 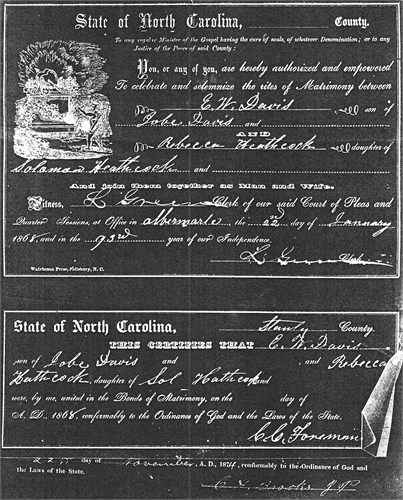 The following is an article published in the Stanly News and Press and in the Albemarle Bicentenial Book circa 1950.

There were a number of mistakes in this article, one being that E.W. Davis was the oldest son, when actually, he was the next to the youngest of 8 for Sarah and 4 for Job. There was only one daughter in the bunch, Charlotte, who would marry Rev. Levi Stancill and migrate to Newton County, Georgia.

Posted by Jobs Children at 9:48 PM