I'm my own Grandpa?

I remember watching Hee Haw as a child. Being from a small town in the Deep South, there were a few shows that were almost biblical in there importance:" Mayberry" with Andy Griffith, a North Carolina native, in a show about a small town in North Carolina was preeminent. The second was" The Beverly Hillbillies". Although they were from Tennessee, the proximity to North Carolina's Blue Ridge was still relevant. Lastly,  was"Hee Haw", a comedy and musical show. While most of the characters were stereotyped and buffoonish, the actors were bona fide country comedians and musicians. My favorite was Grandpa Jones. He was authentic. He had this song, "I am my own Grandpa", that was a little thick for me as a child to keep up with, but the basic story of intermarriage and inbreeding had placed him in the situation of being his own Grandfather.

My children always moaned at any mention of us being related to ourselves, but the fact is that it was the truth. In more ways than one. Most of our ancestors originated in the Southern part of our county, or the West, and in these small farming communities where transportation was rough, roads were few and the population was small, marrying candidates were limited. Brothers from one family would marry sisters from another making their children double-cousins. Distant cousins would marry and sometimes even first cousins would marry.

As a teenager, discovering that my daddy's grandmother and my mother's great-grandmother had the same maiden names was what spurred my search into our family history to start with. While I had made a good headway at that age, digging through the Heritage Room at our local library and records in the courthouse, the particular findings I had came upon at that time had been incorrect. I found out that Frances Julina Aldridge had been the daughter of Henry Garner Aldridge and Priscilla Murray Aldridge. In fact, in the 1860 census, they were shown with two daughters born in 1856, Julina and Julia. My Uncle Ted's obituary had mistakenly listed his mother's name as Julia. This brought me to the conclusion that my parents were fifth cousins and that Julina and Julia were twins. Later research as an adult corrected this assumption. While Julina and Julia were indeed twins, Julia had died before her father passed away in 1862. When the oldest son, Caleb Hampton Aldridge aka "Hamp" went to court to basically steal the whole of his fathers land away from his minor siblings, he did not make mention of Julia, but Frances Julina was indeed mentioned. I also discovered that my Grandmother Thompson's mother was not Julia Aldridge, but Judy Aldridge, or more accurately Judith E Aldridge. While Julina and Judy were indeed related, as all of the Stanly County Aldridges were, they were second cousins, not twin sisters. My parents were then, very distant cousins, second cousins thrice removed, if I have calculated accurately. 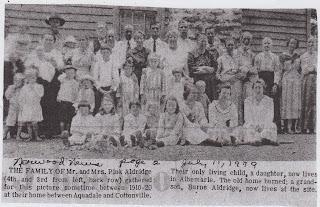 This is the family of James Pinkney Aldridge, better known as Pink and his wife Mary Sarah Floyd Aldridge. My grandmother, who lived until 1980 is the second young lady standing on the back row, from the right. I would recognize her anywhere. Hattie Helen Hudson was the daughter of Pink's daughter Judy. Judy was the second daughter of his second marriage, his first marriage being to the sister of Mary Sarah, Martha Susan Floyd. He also had children by women he didn't marry, but that is another post.

Pinkney was a common name here during the 1800's, being passed down from the surname of an old Virginia family and many of the early Rocky River/PeeDee River settlers were Virginians.

My 4 Great Grandfather Job Davis and his wife Sarah Winfield  Davis were Virginians. Sarah arrived with her parents Peter Winfield and Charlotte Freeman Winfield about 1784 or 1785. Job arrived a decade later with his first cousin Mary Tillman Floyd and her husband Josiah Floyd. Both were born in 1773 in Mecklenburg County, Virginia and very likely knew each other as children.

And yes, Virginia...there was a Pink Floyd.

Posted by Jobs Children at 7:57 AM