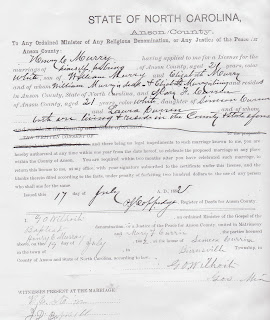 This is the Marriage license of one Henry C Murray and Mary F Currin.
Both bride and groom are listed as 21 and living in Anson County. 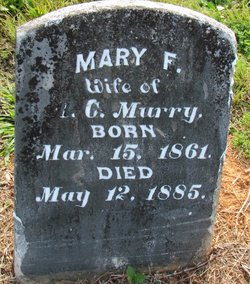 This is the tombstone of Mary F. Currin Murry, wife of H. C. Murry. She is buried at the Cedar Grove Baptist Church Cemetary in Northern Anson County, where a large number of my ancient family members are buried, but I have yet to be able to place her in my family tree. As she is buried with many other of them, I felt she had to hang on one branch of the other. So now there is a search to find out who she is.


I was able to find her parents on Ancestry. com
Simon or Simeon, apparently lived in the upper Anson County communities of Burnsville and Cedar Hill where quite a few of the Howells, Carpenters, Kendalls, Davis's and Winfields did.

He lived to be considerably old for the time. Simeon is buried at Cedar Grove, along with his wife and a son William. He also apparently had a son named Jesse, because I found a death certificate.  Jesse was born in Anson, a county below us and died in Rowan, a county above.


Now...I just have to find the origins of this set of Murrays. There are 2 William Murry's in the 1850 census of Stanly County. Both are orphans or so...bound out to live in other families. One is the son of Moriah Murray, whose estate was settled in 1853, one of Jesse's daughters. Jesse had another daughter Jane, who is buried in Polkton, who had 2 sons and a daughter without the benefit of marriage. His son James also died in 1850, his chidren only marks in the previous census. The other William must be a son of one of those.

Posted by Jobs Children at 5:28 AM