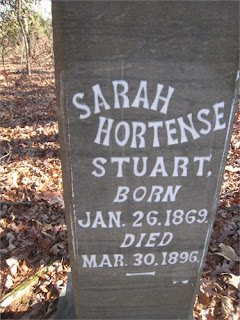 Sarah Hortense Davis was the only daughter of Edward Winfield Davis, the third son of Job and Sarah Davis. Neddy, as he was known to his family would marry late in life to a much younger woman, Rebecca Hathcock. They would have 5 children together. Two sons, Edward T and Jaspar died as children. When  Neddy died, his nephew, my great-great grandfather H. H. "Hawk" Davis was given guardianship of the 3 living children, Hortense, John Teeter and Thomas A.

Neddy was a merchant, lawman, lawyer and politician. His name, E W Davis, is on every page of early county court records as he held the office of the second sheriff of the county. Later, he brought several lawsuits against persons who owed him money, and also for others in the community who did not have the education and knowledge of how to do so.

Sarah Hortense, named for her grandmother Sarah Winfield Davis, would be known by her middle name, Hortense. She was the firstborn child and probably helped Rebecca with her four younger brothers. She was born into a family with money and to a well known and well respected father, so she likely had it much better off than many other girls in the community still bleeding and battered and suffering from the effects of war and  reconstruction. 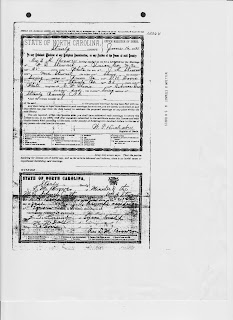 This is the marriage license of Hortense and William R Stewart. He was the son of a J M Stewart from Union County, North Carolina, a county that borders Stanly to the Southwest. They had a June wedding, on the 16th in 1891. Her guardian, H H had married just two years prior to Julina Aldridge.  Her father had died in 1882, and her mother married John T Crump the following year.

The marriage was performed by a Rev. L M Brown. Witnesses were Hortenses' stepfather, JT Crump, her brother Thomas A Davis, and her cousin and guardian Horton Hampton Davis.

I had seen Hotenses' monument in the Davis Family cemetary, and made a mental note of her young age, 27. There were many reasons for people to die young in 1897. Epidemics would devastate entire communities. Many young women, especially miles out into the country away from a physican, still died in childbirth at the brink of the twentieth century. Accidents would happen and no ambulance could be called to rush the victim to the hospital. So I thought no more about it.

Last week, I went to the local Mormon Church to view some microfilm I had ordered from Utah. FamilySearch.org is a wonderful site and I was fortunate enough to have a Center in my community where I can order the records and view them. While searching old divorce records for something else, I came across the divorce proceedings for Hortense and William R Stewart. Her divorce was granted in 1895 and she passed away shortly after in 1896. In the documents she mentioned a two year old daughter that I, nor apparently anyone else in the family, knew about. I have a mystery to solve.

What did Hortense die of? What was her daughters name? Did she die as an infant or did she make it to adulthood? Was Hortense the victim of foul play? Did she commit suicide in sorrow? Who was this William R Stewart and what happened to him after her death?

I have made surprising, amazing, delightful and tragic discoveries in my genealogical quests, and could  began  by tracking through them all. Instead, I am beginning with my current quest and will back track to the others in time. For the moment, young cousin Hortense clouds my mind. Is she speaking to me? Does need for her story to be heard?

Posted by Jobs Children at 5:34 PM