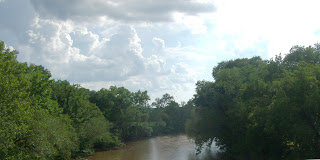 When you cross the Rocky River at the Southern most boundary of Stanly County, you are either in Anson or Union Counties. While Union borders the western side of Stanly County, Anson borders the Southeastern side, where the majority of my ancestors chose to settle. It is at this point where the Rocky ends, flowing into the PeeDee and adding it's brown murky tea to the endless flow to the Atlantic. This intersection, known locally as 'The Forks of the River', where my maternal grandmother grew up, and most of the ancestors of my maternal grandfather as well. 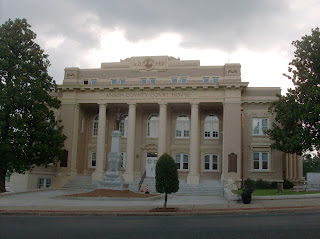 Anson is a very old county. At one time it ran all the way to the Mississippi. When you cross the river, you can almost breathe in the history. There is sensation among the seemingly endless green fields of corn and milo, soybeans and cotton and the deep greeness of the earth, that one has stepped back in time. This was once an area of life along the rivers and many creeks feeding them that was straight out of 'Gone with the Wind'. Many versions of Tara once dotted the landscape. Anson gave birth to many families whose names dot population scedules, cemetaries and modern censuses, not just locally, but in states further west and south where citizens migrated in regular groves. Abbeville, SC; Perry County, Alabama; Pope County, Arkansas; Fayette County, Tennesee. There are sections of Arkansas where the phonebooks probably look like a reprint of Stanly or Anson. Ingram, Culpepper, Little, Lee, Flake, Howell, Ledbetter, Tindall, Davis, Winfield, Pless, Carpenter, Pennington, Staton, Stewart, McRae, McSwain, Hudson, Honeycutt, Almond, Furr, Aldridge, Whitley, Eudy, Billingsley, Nash, Avett...the list goes on.

I am not sure what it is about Anson, but I feel such a connection to it. My family had a tendancy to not stay on one side of the river, so there are many records that benefit in both counties. The Anson County courthouse does not claim to be as old as the Union County one, but Union County was carved off of Anson, and pulled off part of old Mecklenburg.

There is a richness of the earth in Anson, an ancient feeling. A sticky feeling that gets into yours bones through the loamy, woodsy scent of the earth, the fertile fields, the piney woods carpeted with pine needles and oak leaves, the marshy backwaters of the PeeDee with their reeds and lilly pads.

I struck ore in my trip to Anson yesterday. I found tons of information on the Turner family and Howell's. I found some misinformation in the Winfields and a few more questions, a few marriage records and a Pearce history that I know that will be of use later.

I found nothing on the Stewarts, but I did solve the mystery of one Mary Murray, wife of H. C. Murray, who I had not been able to plug into my Murray family tree. I found her marriage license....but that is another post.
Posted by Jobs Children at 4:13 AM