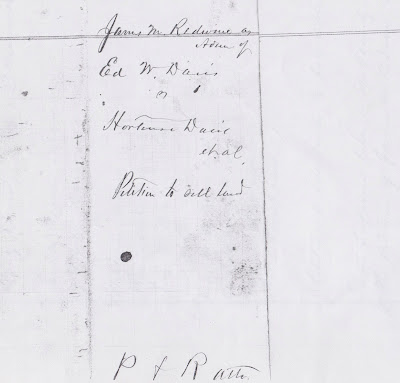 This is a copy of the Petition to sell Lands of Edward Winfield Davis, father of Sarah Hortense Davis Stewart, who has been the latest Mystery I've been in pursuit of. Old documents do not scan well. Some of the writing is faint, and the scanner will pick up only bits and pieces of it. Therefore, transcription is the best way for me to deal with this problem. Edward Winfield Davis was born in 1811 and died in 1882. He was the third son of Job Davis and the seventh child of Sarah Winfield Howell Davis. He was a merchant, a gentleman farmer,  a statesman, a sheriff and advocate. I have found many instances of E.W. Davis serving as the administrator of estates of relatives and neighbors, filing law suits for widows and orphans in the community to ensure their financial stability and loaning money to those in need. For all the good that Neddy Davis did, I have found many instances in where friends and family literally screwed him over. The distinguished Col. E. W. Davis found himself, despite his once great wealth, enormous land holdings and bushels of good will, in debt. Even his father, Job Davis, in his will, repaid Neddy for loans he had out to his n'er-do-well older brother Henry, my direct ancestor.


Petition to sell land to pay debts, To the Supreme Court of Stanly County II The Petition of James M. Redwine as administrator of Edward W. Davis would respectfully show that on the third day of November 1882 letter of administration even duly granted to your petitioners by the Probate Court of Stanly County and he at once entered upon the discharge of his duties as such.

II II That the personal estate of said Edward W Davis is worth about eleven hundred and seventy one Dollars ($1171) which has been exhausted in the laying off of the widows year allowance in the costs of administration etc.

II II II That there are outstanding debts against said estate amounting to almost two thousand five hundred dollars, according to his best information as I believe.

II IV  That at the time of his death he the said Ed W Davis did seize of the farming tract of land amongst others (Trivt?)

1st tract known as the Shelby Carpenter lands in said county adjoining  the lands of David W Bennett and others containing 68 acres more or less, on the waters of Ugly Creek valued at about 3 dollars per acres 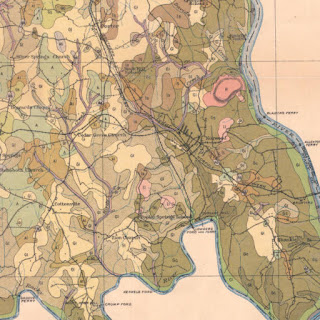 This amendment put in by leave of the county
A. C. Freeman C. S. C. (A. C. Freeman a distant relative from the Freemans who migrated from Viriginia in the 1780's with the Winfields. Charlotte Freeman Winfield was the mother of Sarah Winfield Davis and grandmother of E. W. Davis)

That ends prays the court that summons every open(?) to said Defendants according to law. + your Petitioners as in duty bound ever pray  ie
Pemberton and Redwine attys.

Stanly County
James M Redwine being duty sworn says that the facts set forth in the foregoing Petition of his knowledge are true those stated on belief + information he believes to be true.
Sworn and subcribed J. M Redwine Admin.
A.C. Freeman CJC 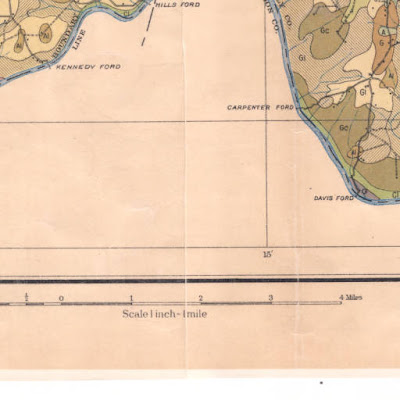 Close up of map showing Davis Ford and Carpenter Ford. 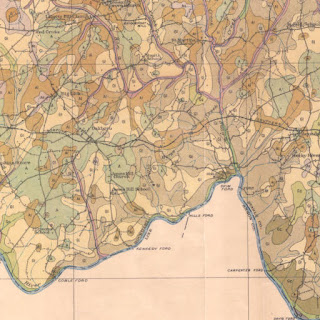 As you can tell by the descriptions, E. W. Davis had been in possession of a substantial amount of property. An entire pennisula and far up into the county to Rocky River springs. Hortense would have been considered a young lady of means when William R Stewart married her. I have yet to discover the cause of her death or the course William R Stewart took afterwards. He evidently did not love her or their daughter Ouisa, who I recently discovered was raised by her grandmother Rebecca after her mother's death. I am still waiting on documents, Hortense's estate settlement, the physical copies of the divorce papers, and anything involving Kitty Davis, Hortense's second cousin, daughter of Benjamin Franklin Davis and mistress of William R Stewart.

Posted by Jobs Children at 8:30 PM