The Source of the Yadkin Part II

I live in the Uwharrie Mountains and the Yadkin River Valley. The Yadkin Valley is a rich farmland area that starts in the foothills of the Blue Ridge Mountains and ambles down into the Piedmont. The Uwharries are said to be 500 million years old.....that's pretty old. They encompass the counties of Randolph, Davidson, Stanly and Montgomery. The foothills of the Uwharries amble over into Anson, Union, Cabbarrus and the northern edge kisses Person county.

This is the view of the bridge crossing at Tuckertown. I cross this bridge many times a day. Tuckertown is now just a community that contains a few businesses and several houses, but its most important feature is that what is considered the Tuckertown community encompasses four counties. While the sporting goods store, the hotel, the diner, garage and home interior store are all in Stanly County, there are a few taverns and restaurant in Rowan, the Tuckertown dam itself is in Montgomery, and the other side of the bridge is considered Davidson. Cabarrus and Randolph are very close by as well, so about 6 counties meet and shake hands at this point.

Several of my first husband's ancestors lived on the Montgomery side of  the river, Russel's, Dennis's and Ragsdales. When they built the dam, these families were displaced and had to find somewhere else to settle. Several of them relocated during the first part of the 1900's in the growing little textile town of Albemarle in Stanly County. The families whose farms were not under water were faced with a worse enemy, the backup of the dirty water caused an outbreak of thyhoid. A large number of people died and the survivors had to locate. What was once a thriving town is now mostly underwater. The area was so populous there were a large number of graveyards in the area that had to be relocated. Two high spots were picked and became islands. They are now known as Graveyard Island One and Graveyard Island Two. Sadly, the people responsible for exhuming the coffins and relocating the graves did not take great care in recording names and relocating tombstones. Most of them are illegible and hard to read. Many ancestors are said to be buried on one of these islands, but the exact spot can not be found. 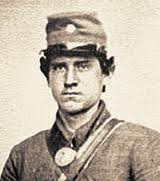 One of the more interesting points along the Yadkins path is the site of Tom Dula's grave and the place near present day Ferguson, North Carolina in Wilkes County where the murder of Laura Foster took place. The son "Lay Down your Head Tom Dooley" made popular by the Kingston Trio was about his murder and trial. Dooley was the mountain people way of pronouncing "Dula',
(Picture Courtesy of Wilkes County Historical Society).
Recording:
"Tom Dooley" - The Kingston Trio

The whole story would have made a good soap opera. It involved a love quadrangle, adultery, murder, lascivious behavior and syphilis. The name of the murdered girl was Laura Foster. Two cousins of her, Pauline Foster and Ann Foster Melton were involved in the affair, the murder and the trial, but there was no measure of certainty who actually killed Laura Foster or who may have gotten away with murder. The facts stand that Laura Foster was killed and Thomas Dula was hanged for it.

We followed the Yadkin out of Wilkes and up into the Blue Ridge. It carved its way through thick cane breaks and kudzu laden forests, neither of which existed during the days of Tom and his womanizing ways.

Making its way toward Blowing Rock, the Yadkin is just a gurgling stream, but all along the way downstream it had been fed by three smaller rivers and numberous creeks and branches.

This picturesque church is located in
a quaint little community called Grantham, NC. Population 5 people, 3 houses and one church.

We followed Yadkin...creek up to the Blue Ridge Parkway, one of the most beautiful spots on God's Green Earth. After a few miles we got off
at the Blowing Rock exit. After all these miles my search of the soure of the Yadkin culminated at this spot.. The mighty river that brought my ancestors to the place where my lineage would settle and that sustained the Yadkin Valley settlers for centuries begins right here in a spring head at the edge of a parking lot.

This is the source of the mighty Yadkin...a pipe coming out of the ground. The Green Park Inn is still a resort, but the spring was once its main attraction. It is still a beautiful Inn and made a parking lot of the springs area, where just a pipe and a concrete slab announce it's presence. The Inn has a nice golf course to its credit but its biggest draw are the ghost stories surrounding it. It is, after all, the oldest Inn in Blowing Rock. Maybe old Tom Dooley is one of the troubled souls courting the Inn. You can't look for old things without running into spider webs and ghost stories. But I traced the Yadkin from its end to its begging. Old Grandpa Yadkin keeps rolling along.

Posted by Jobs Children at 3:10 AM