The Will of Jane Murray

Jane's maiden name was Pierce or Pearce. She was multiracial and descended from the Nansemond and Delware tribes. Jesse was an adult by the 1800 census and shows up in his own household. Only Jesse shows up in the 1810 census of Chatham County, and not Jane. In 1820 Jesse is listed in the Anson County census and in 1822 he is listed in land records. Sometimes his name is spelled Jessee. In 1830, he is in the Montgomery County census, on the West PeeDee side, which became Stanly County. Stanly was his final resting place as he is buried in a patch of trees, in the middle of a cornfield, on Prince Road near Long Creek. Jesse would name his oldest daughter Jane, and had a sister Jane as well, as can be seen on the will.

The one question I have about this will is......what did Ann do to have her mother leave her so little and ...what is a Heckle? 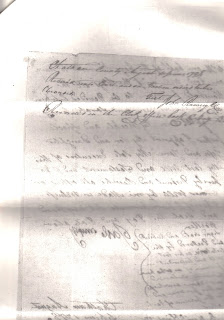 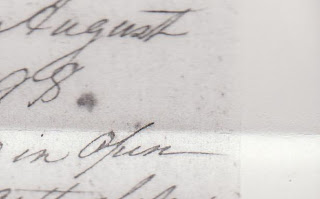 This is the transcription of Jane Murray's Will:


In the name of God amen, I Jane Murray of Chatham County and the state of North Carolina being of sound and perfect mind and memory blessed be God on this first day of June on the year of our Lord one thousand seven hundred and ninety-five make and publish this, my last will and testament in manner following: That is to say: First I recommend my soul to God who gave it not doubting but he will Dispose of it as best suits his Godlike wisdom and my body to be buried in a Christianlike manner at the descretion of my Executor and as to the worldly good which it has pleased God to bless me with I will that they be disposed of in the following manner   That is to say my will and desire that the tract of land whereon I now live containing one hundred and forty acres be Equally Divided between my three children as (?) Jane Jesse and Sarah Murray. & Jesse to have his part adjoining Isaac Brooks and Baalam Thompson line & Sarah to have her part adjoining Jesse's part and Jane to have the part whereon the plantation now is & Jesse to have one cow and one horse with one half of the hogs and Sarah to have one cow and one half of the hogs. All the household furniture to be divided among my daughters Jane and Sarah. To my daughter Ann, my Heckle and spools. Further I appoint my son and daughter Jesse and Jane my sole executors of this my last Will and Testament and I do hereby Disanull and Revoke all other or former wills by me made in Witness whose of I have servants by my hand and seal the Day and Date above written.


(In an aside with a dividing scribble)
signed, sealed, published and declared
by the testament as her last will and testament
in the presence of us who have servents suspended (?)
(discolored) our names in witness as her presence and in the
presence of each other