Yesterday I attended the celebration of the life of my fourth cousin, Pecola Eloise Cannady Holman. She was a saint, who passed through this world between the years of 1931 and 2012. Although I had not had the opportunity to meet Cola, plans were underway to meet up with her and I heard she was as excited to meet me as I was her. He son said her 'spirits were lifted' when she learned we had found each other.

This so called 'funeral', was one of the most beautiful services I have ever attended. In the words and memories of her friends, church fellows and family, her spirit rebloomed and came to life. Several spoke of her endearing laughter, how her laugh would overcome her entire body until she shook. How her boundless love and strength would emcompass everyone around her.They gave treasured examples of her wit, her wisdom and her compassion. How my eyes tear at not having the opportunity to know this incredible lady. 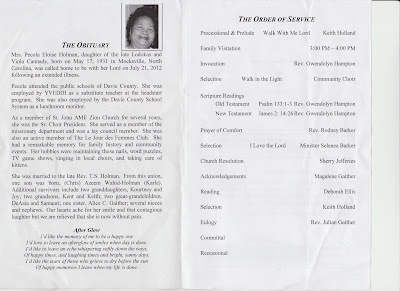 The journey that led me to this church, to this lady, was one of research hours and a vital curiosity and the hope of finding a long lost part of my family history.

Pecola Cannady Holman was the daughter of Lodokis Streeter Hayes Cannidy, who was born in Stanly County in the year 1884, the year his parent were married. He grew up for the most part in Davie County, NC and this is the hometown of most of his descendants yet until today. Doke, as he was called, married a lady named Viola Hudson and 11 children together, some who died in infancy. Pecola Eloise was the youngest of these.  She married the Rev. Thomas Stone Holman, a professor at Livingstone College in Salisbury, North Carolina and in 1960, they had one son, Christopher C. / Azeem Wahid-Holman.

My journey had began with Matilda Aldridge. Matilda Aldridge was the youngest daughter of Priscilla "Prussia" Murray and the sister of my great-great grandmother Julina Aldridge Davis, who married H. H. "Hawk" Davis. Matilda was also the mother of Lodokis Streeter Hayes Cannady, and the grandmother of Pecola Cannady Holman. Matilda had married Robert D Kennedy and the name had become Cannady after decades of being spelled in multiple ways. Bob and Tildie married in 1884 and moved their young family to the Litaker community in Rowan County sometime before the 1900 census. They eventually moved up one more county to Davie. In attempting to research what had become of Aunt Tildie, whose existence I had known about as a child, but whose whereabouts had become forgotten in the passing of the generations.

Ours is a multi-racial family in every color of brown that exists. I have closer cousins with jet black hair and olive skin betraying the tri-racial background of the Murrays. The grandchildren and great-grandchildren of Doke Cannady range from those who are as fair complected as any European to those who are as dark complected as any African. Doke's wife Viola, although I have not researched her heritage, was listed in documents as 'mulatto' as well as he was. Our common ancestor, Prussia Murray, was from the tri-racial Murray/Pearce clan who were of Delaware Indian, Nansemond Indian, Haliwa-Saponi, Scottish, British and Angolan and Moorish heritage. The family was founded by a mix of Scottish traders who married remanant Native Americans and Irish bondservants who married Free African tradesmen and a Moorish pilgrim who married the daughter of a British Sea Captain, all whose offspring greatly intermarried with each other and with other Native American/Caucasian/African triracial isolates.

Prussia married a man of English decent and had Julina, along with 9 other children. Her husband passed away from a bout of the measles and sometime afterwards, she bonded with a man, who most likely, but not for certain,  was a recently freed slave,  whose last name was either Love or Little. She was a widow with a substantial, but subsistence-sized farm, in need of someone stronger than she and her 3 young children who remained at home. He may have been seeking employment. Those details are lost to prosterity. What is known is that in 1867, Priscilla gave birth to this little girl, Matilda. In the 1870 census, 50 year old Prussia is listed with her 3 year old daughter Matilda. In 1884, Matilda marries Robert D Kennedy. While both are listed as colored, their mothers are listed as white. Despite being known among her neighbors and descendants as Native American, Prussia was considered white for marrying a white man. Sarah Kennedy, the mother of Bob Kennedy, was the member of a family whose descendants have traced them back to Perth, Scotland. She was a woman ahead of her time and out of her element. She owned several businesses, without the benefit of a husband and over the course of 16 years, gave birth to four children described as mulatto's. She died mysteriously before 1873, as her son's were bound out to area farmeers as orphans to learn the art of farming. Matilda had been removed from the home of her mother the year prior and placed in the home of Henry Love, a man listed as 'colored' and also in the 1880 census as her uncle. Also living in the Henry Love family is a Mrs. Little, listed as his mother-in-law.

When I decided to research the destiny of Matilda, I did not know I would come across living descendants. When I discovered the youngest daughter of Matilda's only son had had a son the same month and year as I was born, I realized he was probably still alive, as Cousin Azeem and I are still spring chickens. Out of curiosity, I googled him and up popped his professional profile and I discovered he and I had something else in common. While neither of us lived there, we both worked in the same town. It was too much for coincidence, I knew I had to send him an email, and the rest is history.

I felt it was selfish of me, to have all of this information about this family, MY family, and their heritage, and not share. While my contact with Azeem, just the other week, was too late for us to have made time in our extremely busy schedules to make time to go visit Pecola together before she went into a coma, and died a week later while I was on vacation, I was able to attend the celebration of her magnificent life yesterday and meet other cousins and members of this beautiful family. I am overcome with happiness to have found them and to have met them. Their loving welcome and greetings have been such a blessing. My only regret, and one I will hold in my heart forver, is having not met this beautiful lady who had such a larger-than-life personality and warm spirit, not having the opportunity to taste her legendary vegatable soup or play scrabble with her and hear her contagious laugh. I take solace in knowing she was able to hear about me and I about her. Godspeed my dear Cousin Pecola.

Posted by Jobs Children at 6:48 AM