The Fate of Hortense

The accidental discovery of the fact that Sarah Hortense Stuart had filed for divorce from her husband of 4 years, William R Stewart, came as a surprise to me. Divorce was very rare during the Victorian Era. This was the gay 90's, a time of discovery and invention and revitalization in America.

In Stanly County, North Carolina, young Hortense Stewart claimed that her husband had had an affair with a woman she identified as Kit Davis, likely a cousin of hers, but possibly not. This is something I plan to look into, the identity of this woman. She also claimed that William had abandoned her and their daughter, who in 1894 was two years old. The document does not give the name of the little girl. Hortense adds that she believes her husband to be in Chester County, South Carolina. There was a substantial Stewart family in both Union County, where William was from, and in Chester County, where he ended up. He may have had relatives down there. 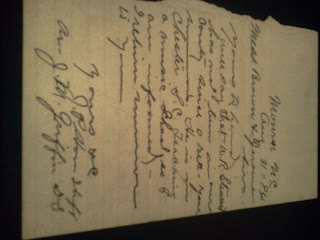 This is a letter that was included in the divorce documents. It is from Monroe, North Carolina, the county seat of Union County and is dated August 31, 1894. It is addressed to Mr's Brown and Jerome, likely attorneys and states that W. R. Stewart has not been in 'our' county (Union) since they had recieved the summons. He is in Chester S. C. teaching a music school "I am informed." And is signed by the Sherriff and J M Griffin, D. S. 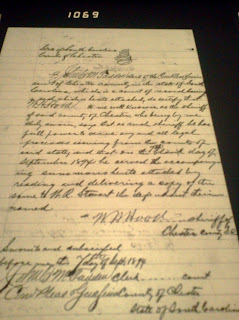 This third document is from W. W. Hood, sheriff of Chester County, South Carolina and in so many words states that he located W. R. Stewart in Chester County and read to him the summons and delivered a copy to him.

I have requested copies of these from the State Archives in Raleigh, but have not yet received notice that they have found them for me to order.

There are additional documents in the packet, and in the end, the divorce is granted in 1895 and Hortense is awarded custody of the child, still not named.

Today I made a trip to Union County to look through records and found a great deal of information on Stewarts, but as initials are used and names are common, I can not be sure any were the ones I was looking for. I wrote down a great deal of names of the Stewarts who were living in the county at the time William was born and will be researching these individuals on Ancestry.com to see if I can locate William R in any of them. Being born in 1868, he should show up in the 1870 and 1880 censuses with his family. I am also attempting to collect any information on a Music School in Chester around the turn of the century and how long W. R. Stewart remained there. Did he marry Kit Davis and who exactly was she? He came up to Stanly County for the divorce proceedings. Did he and Hortense have a horrible fight with a tragic end? What became of the little girl? Did she remain with the Davis family or did she go to live with her father or his relatives in Monroe? Maybe I will never find out....but the hunt is on.

Posted by Jobs Children at 8:07 PM