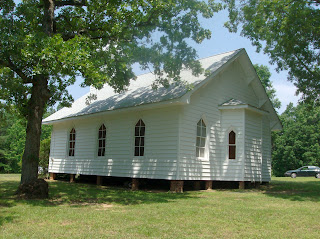 It would be a safe estimate to make that 90% or more of the people buried at the old Rehobeth Church cemetary in Southern Stanly County, North Carolina share DNA with me.

Rehobeth is an abandoned, but upkept property, with a substantial cemetary. Actually, the cemetaries are considered two different ones, the older and the younger. Some of the oldest graves were marked only with river rock or slate markers and can no longer be deciphered. 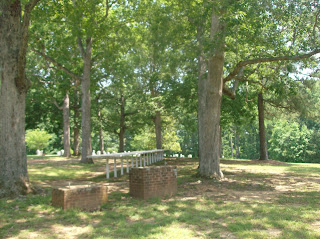 In a history of Green Memorial United Methodist Church, it states that Green Memorial was organized in 1924 as Aquadale Methodist Church when three smaller churches merged. These three were Cottonville Methodist Church, Aquadale and Rehobeth. Aquadale is a community north of Rehobeth built around the popularity of Rock River Springs, a nearby resort. The Davis family plantation abutted Rocky River Springs, the Aldridge and Floyd families, among others, had settled just northeast of there and the Murrays lived just south east of Aquadale. Today, Aquadale has a few businesses, a school, a fire station and a convenience store. Cottonville was located along the plank road heading into Anson County. Today, Cottonville only has an abandoned store in the forks of Plank Road and Gaddys Ferry road, with 2 churches and a handful of houses. It's ballfield and small playground at the Baptist Church remains well-used, however. 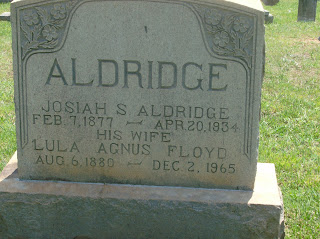 Tombstone of one of my Aldridge relatives.

Rehobeth began as a Lutheran Society around 1840 along the Cheraw-Salisbury Road and meant "broad places", the name of a well in the Bible, meaning there was room for everyone to draw water from. Genesis 6:22.

This southern section of the road would be known as Winfield Road, which only a small section remains  today with that name, cutting between Aquadale and Norwood, but at the time, went down to the Winfield Ford, which would later be named the Davis Ford. 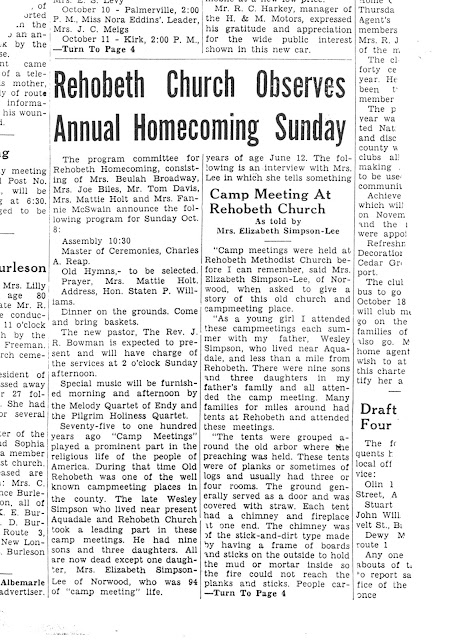 The first Lot was bought from Ben Murray, son of Jesse and brother to Prussia Murray. It contained 9 acres and was purchased for $6.00. Records date back to 1852. Rev. E. M. Avett mentions camp meetings held there until 1885. Cabins and tents were erected and entire families would come every summer and spend a week to 10 days in revival, fellowship and worship. A cyclone took out the church in 1920 and it would be rebuilt in 1924, even after the merger.  A small delegation would continue to meet there until their numbers dwindled away.  The following article is from the October 5th, 1950 edition of the Stanly News and Press.

Mr. Tom Davis mentioned in the first paragraph was my great-grandfather Will Davis's brother and Mrs Mattie Holt, his sister Martha. Wesley Simpson who is mentioned played a big part in my family as well. He married Margaret the adopted sister of my great-great, great grandfather Garner Aldridge, he served as the administrator of Mariah Murrays estate, and he also recorded much of the history of area families in his bible, which gives us information other records never would have. 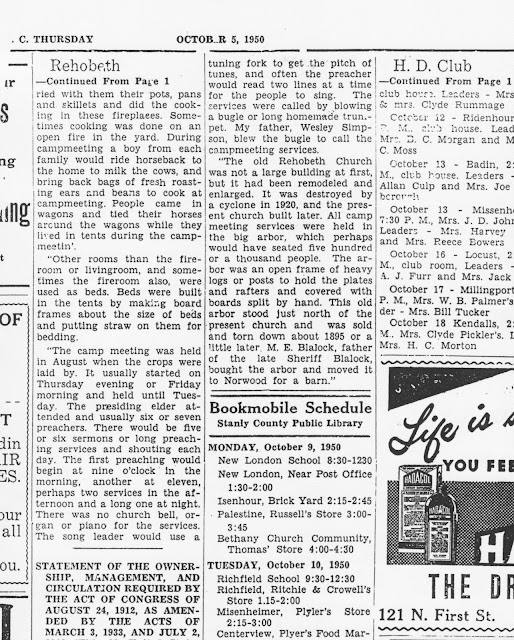 A history of the church was prepared by Martha E. Price in 1965 for an assignment for the University of North Carolina at Charlotte.

She states that in 1965 there were only 5 living members and that the church parsonage had burned in about 1928 and many records were lost.

The following is from this recollection of Rehobeth.

"The twentieth century has not changed Rehobeth Church from its historical course. There it stands painted white with a tin roof and a hand pump in front. Inside the church, right in the middle of the aisel there is an old black stove which provided heat for the congregation yesterday and today. On the walls between the windows there are crude handmade sconces for the candle that lit the church until  1964.  In the front of the church stands a piano, the pulpit and three chairs. So simple yet so meaningful of the past and their Christian Faith. Sunrays shine through windows that reach almost to the ceiling thus adding their beauty to this historical sight.  On the pulpit is the most remarkable thing to me, an old Bible which has an Apocrypha. Here are books of the Bible which filled the gap between the Old Testament and the New Testament. Here are Esdras I and Ii, Tabit, Judith, the rest of the chapter of the book of Esther which are found neither in the Hebrew nor in the Chaldee, The Wisdom of Solomon, The Wisdom of Jesus the Son of Sirach, Baruch, The Song of the Three Holy Children, The History of Suzanna, The History of the Destruction of Bel, and The Dragon, cut off from the end of Daniel, the first and second books of the Maccabees.
In the back yard of the Church silently rest the forefathers of this church. I saw hand carved gravestones carved out of the river rocks. G. W. Simpson, Caleb Simpson and John W. Puett were some of the names that I remember."

Further history of the church revels that worshippers were called with the sound of a trumpet to come to worship. At camp meetings, families would bring whatever they may need, including milk cows. They would build fireplaces to cook, meals would be shared by all and fresh water could be drawn from a spring just below the church.

The church sat very near the Winfield road, one of the oldest in the area. Early ministers were often itinerant, and were paid in produce and livestock by the members, he and his horse cared for by the local families during his stay.

Green Wesley Simpson records that the church began as a German Lutheran Society. My family members were from long lines of Welsh Methodists, and they are the ones who surrounded the church, so this did not last long and soon Rehobeths name was changed to Rehobeth Methodist Church South and was in the Norwood circuit. The Rehobeth Society became a church from that day forth.

A local Tornado in April of 1920 destroyed the church building and dissention entered on the rebuilding plans. The Norfolk-Southern railway had built through the community prior and the nearest station was at the young community of Aquadale. Some members wanted to rebuild at Aquadale, others wanted it to be rebuilt in its original spot near the cemetary.

A deed of 1852 implied that the original church building had been built in that year and that early deeds were for the ground on which it stood. Some believe it began as a brush arbor. So large were the crowds that no small building  could hold them. Estimates would be between 400 to 500 people. In order to accomodate this many, a shelter was built to the side of the church with logs and seats made of pine slabs. The seats were arranged in rows and straw piled in between the seats for the children who would inevitably nod out during the long services. Older children were expected to sit quietly and reverently next to their parents. In the center would be built a platform to elevate the pulpit, so all around could see and hear the speaker. They had no PA systems in those days.

In the Register of Deeds Office, two deeds exist dated 1852 and 1854 which states that Benjamin Murry sold to John Poplin, James M. Davis, William Hendley, William R Randle and Caleb Aldridge as Trustees  of Rehobeth Episcopal Church South, for the sum of 6 dollars, a tract of land containing by estimation nine acres in one deed and six and 3/4ths in the second deeded to the same men but witnesses by A. J. Green and G. W. Simpson.

This list of names is significant to me in many ways. First, I am a direct descendant of Caleb Aldridge. His son Henry Garner Aldridge would marry Priscilla 'Prussia' Murray, sister of the mentioned Benjamin Murray. Their daughter Julina Aldridge was my great-grandfather Will Davis's mother. The above mentioned James M. Davis was one of the 4 sons of Job Davis, whom this blog is named for and the Uncle of Julina's husband Horton Hampton Davis. John Poplin's daughter Mary Ann would marry Ben Murrays son Jesse Murray II, named for patriarch Jesse Murray. His son Thomas Poplin would marry Judith Wilmartha Murray, daughter of Ben and Priscilla's oldest sister Jane Murray and his brother Richard Poplin had married Rebecca Murray, another sister. Ben Murray himself, would marry Martha Puett, one of the daughters of a long standing minister at Rehobeth.

to be continued.
Posted by Jobs Children at 9:49 AM