This is a photo of Horton Hampton Davis. He was my great-great grandfather who was born in 1846. He is not the beginning nor the end of my search or even the middle, but he had a remarkable effect on my life and the life of all who came after us, simply by the course of decisions he made and the kind of man he was. 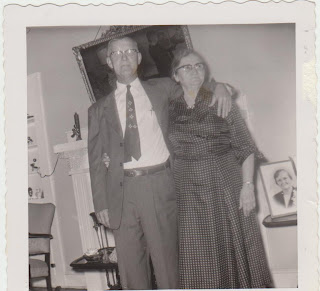 This picture is of my great-grandparents, William Hampton Davis and his wife Penny Wayne Turner Davis. My great grandmother is a vague memory or two as I was only four years old when she passed away, but Papaw Davis lived another 10 years, until I was 14 and memories of him and talking to him, were well impressed upon my mind. At 14, it is hard to be interested in anything that has already happened. The future is beckoning, there are discoveries to be made and fun to be had and a feeling of urgency to grow up and experience it all. But sometimes, the things our elders say will stick with us, and particularly with me. Maybe I was an old soul, but those old family stories were something I stored as treasures in the back of my mind. Now I am ever greatful that I did.

The passing of William Hampton Davis on July 31, 1973 was the event that triggered my interest in genealogy.  There was the usual wake and funeral and obituary printed in The Stanly News and Press. My mother had a habit, I am now glad of, of cutting anything in the paper that had to do with family and keeping it in a scrapbook. My grandfather had a large and very close family, and I remember reading all of the names of my great aunts and uncles, whom I only knew by their call names, as they were printed in full in the obituary. I also read the names of his parents Horton Hampton Davis and Francis Julina Aldridge Davis. Papaw Will as he was called, was named for his father with the 'Hampton' as his middle name. I have not yet discovered the significance of the name Hampton, but I think the possibility that is was the maiden name of a female ancestor up the family tree, as Horton Hampton had an older brother...whose name was...Hampton.

My grandfather, Lewis Theodore Davis, was not the firstborn child, he had had an older brother named Clyde and there had been another firstborn son, William, that died as an infant. Clyde had died as a young man, so for the most of my mother's life and all of my memory, Lewis Davis was the oldest of the Davis clan. 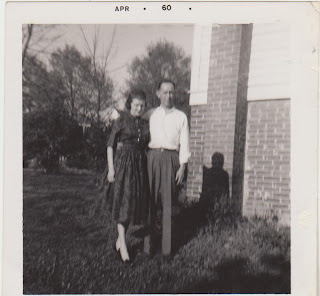 This is my grandfather Lewis Theodore Davis and my mother, his youngest daughter Joyce, shortly after my birth in 1960. The Davis family was big on nicknames and my Poppa's nickname was Doogar. His father was just called Will and I heard the name of his grandfather being called Hawk. Hawk had died in 1906, six years before the birth of Lewis, but his grandmother lived until 1935, just a few years before my mother was born, and long enough to see Lewis married and the first of his 4 children born. She was called Julina with a long "i". I had heard mention of the Aldridge family and that they were cousins and tales of them in family stories. It wasn't until another another death in the family occured that my curiosity was whetted.

Reece Craven Hudson was a member of the other side of my family. He was known to me as Uncle Ted and was the brother of my daddy's mother, Hattie Helen Hudson. He died not too long after Will and again, his obituary was placed in the family scrapbook. And there was that name again...Aldridge. His parents, who were also my grandmothers parents, were listed as J R Hudson and Julia Aldridge. The names were so similar, there had to be a link. And that was what lent spark to the flame, and sparked my interest and so began my journey, to piece together the puzzle that was our family, but not only, a discovery of the much of the history of our county, our area, our state and the history of our country altogether and the beautiful stories of the people and migrations who populated an entire country.
Posted by Jobs Children at 4:30 PM