The Proof is in the Pudding; Julina's day in court. 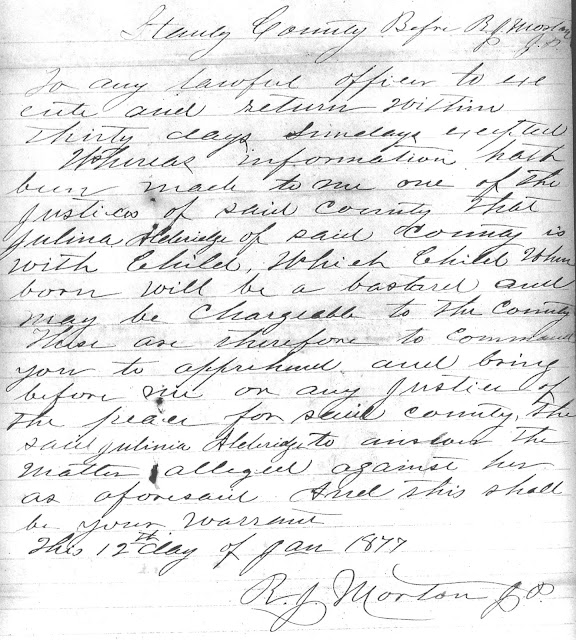 In the words of a distant relatives Aunt, my Great Grandpa's mother was, in her younger days, 'not a nice' person. That did not mean she was ill-tempered or dishonest. What Maudie Scarboro meant when referring to her Aldridge relatives, was that Julina, like many Confederate orphans, had become a mother outside the bounds of marriage.

In 19th century Stanly County, North Carolina, the problem of illegitimate children was handled by the court system. An unmarried woman, when found to be with child or having just had a child, would be ordered to be brought to the next term of court by the currently serving Sherriff. There, she would be ordered to pay a bond, so the burden of the cost of raising the child did not fall on the County. She would be required to name the father of the child, so he too, could be brought to court to pay the bond. If she refused, the full cost of the bond would fall on her and sometimes her own father, or brother, or another relative, or even a caring friend or relative, would pay the bond.

Bonds were not always filed. If the family were wealthy, the county would assume they could afford to pay the bond. Sometimes, the angry father of the pregnant girl would arrange to have the responsible male brought in to court, or an abandoned woman would file herself to have her runaway beau brought into court, who had likely promised her marriage.
So there were a number of circumstances surrounding bastardy bonds.

In the case of Julina Aldridge, she was one of a set of twins, and the youngest daughters of Henry Garner Aldridge and his wife Prussia. She was about six years old when her father died in 1862 in Virginia, of disease caught while serving in the Confederate Army during the Civil War.

Julina was 20, nearly 21, when the above order was served against her. It states: "To any lawful officer to execute and return within thirty days......wherein information hath been made to me, one of the Justices of said county that Julina Aldridge of said county is with child and when born will be a bastard and may be charged to the county. ....command you to apprehend and bring before me or any Justice of the Peace of said county, the said Julina Aldridge to answer the matter alledged against her as aforesaid and This shall be your Warrant.

Mollie Eliza Aldridge was born February 6, 1877, so Julina would have been heavy with child. 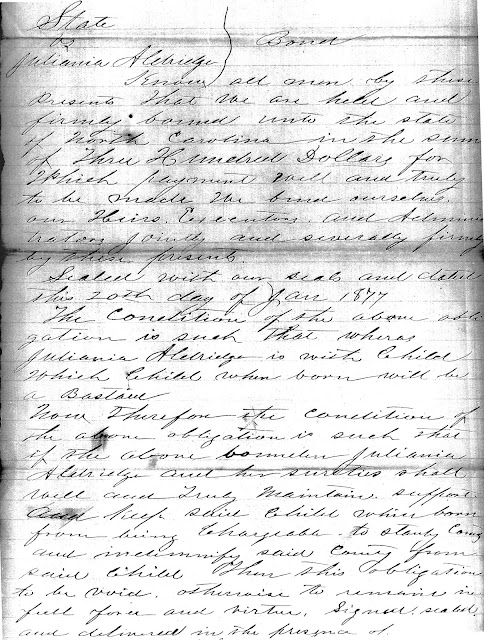 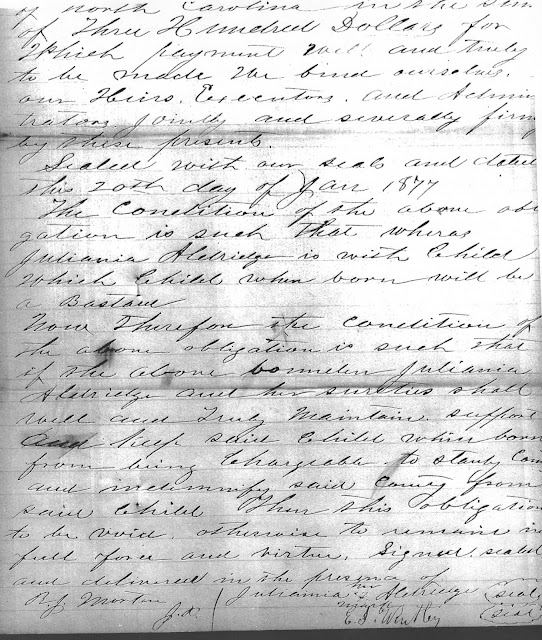 At the bottom of the above document, E. J. Whitley has signed. On Mollie's marriage license, her father is listed as Ephraim Whitley.

For a bond of $300, Julina Aldridge and her baby daddy, Ephraim Whitley, promised the court of Stanly County that the infant Mollie Eliza would not be chargeable or a burden to society.

Julina went on to have another illegitimate child whose father was a Whitley, Jesse Filmore Aldridge. Filmore lists B. L. Whitley (Benjamin Lindsey Whitley) as his ancestor in the Permanent Voter Book.

Filmore was born 1879 and is the tallest son in the picture.

All of the other children only are seen with the surname Davis, whether born prior to or after the marriage.

There is an Aldridge cemetery close the the intersection of Aldridge road and Plank Road and close to Old Davis Road where Julina once lived. Supposedly there are two daughters of hers, Sarah and Elizabeth, buried there, who died as infants. The story is that a man named Kimrey plowed over the graves. Some members of the Floyd family were reputedly buried there as well.

The child referred to in the bond,  Mollie,  died in 1945 and is buried at Rehobeth Church near Aquadale next to her first husband, John Frank Boone, Sr. in a grave surrounded with stones and a large monument. They are buried in the 'new' section of Rehobeth. Her mother and brother Filmore are buried in the same cemetery.