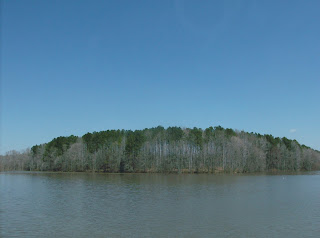 I recently the 19 page document that is the 1838-1840 Civil Suit that Mariah Booth Winfield Moffat Booth brought against her husband and others. While the ancient script is hard to make out in places and full of "legalese", it's meaning is clear and there are enough words that are deciperable to transfer meaning.

It is actally a grouping of documents and Miss Mariah aka 'Scarlett' is suing er'body.

She is not happy and what has befallen her is not to her liking. When Mariah married the first time in 1826 to Dr. James Moffatt or Moffett of Fayetteville, NC and Chester County, SC, she rather naively put her sizable estate under the control of her brother-in-law, Dr. William H Moffett of Fayetteville during the marriage contract. Why her brother-in-law and not her husband, I have not yet determined. When she married her first cousin, Dr. George Washington Booth, in 1836,  she declared him trustee and a document transferring trusteeship was issued wherein Dr. Moffett found Dr. G. W. Booth to be an able recipient of the trust.

Mariah and James Moffat/Moffett had one child, Mary Ann, who is shown in the 1830 census of Marlboro County in South Carolina as being a female under the age of 5, so she was born circa 1827-1830, as her parents wed in 1826. By 1836, when Mariah wed Dr. Booth at her home at Level Green in Marlboro County, her father Joel Winfield's plantation, Dr. James Maffett was declared deceased and Mariah and her child relocated to Lawrence County, Alabama, where her Uncle Harper Booth had removed from Mecklenburg County, Virginia with a stop in Halifax County, North Carolina. 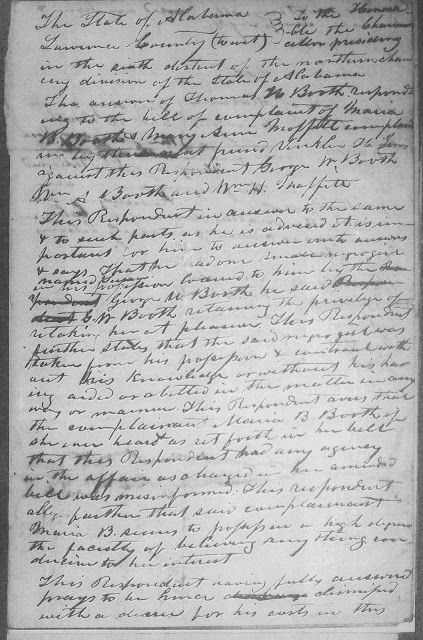 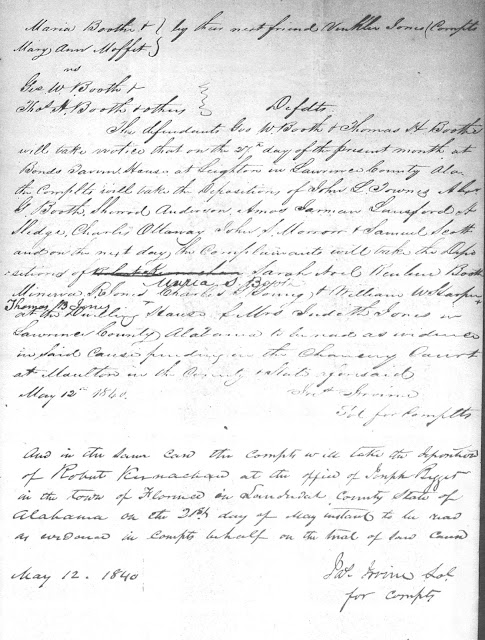 In this document, several members of the Booth family are called to testify. Those served are from various counties in Alabama. This second to the side states that Maria Booth and Mary Ann Moffet "by their next friend Vinkler Jones Complnt. "

The defendants Geo W Booth and Thomas H Booth will take notice that on the 27th day of the present month at Bonds Farm house at Leighton in Lawrence County, Alabama, the complaintants will take the deposition John L Townes, Alexander G. Booth, Sherrod Anderson, Amos Jarman, Lunsford A Sledge, Charles Ottaway, John J Morrow + Samuel Scott. And on the next day, the Complaintants will take the Deposition of  Sarah Noel, Reuben Booth, Minerva R Jones, Maria S Booth, Charles G Young, William W Harper and Thomas B Jones. (The name of Robert Kernachan has been marked out.) at the dwelling house of Mrs. Judith Jones in Lawrence County, Alabama to b?*** t as in d**n* in said cause pending in the Chancery Court at Moulton in the County aforesaid.


And in the same can the complts will take the deposition of  of Robert Kernachan  at the office  of Joseph in the town of Florence in Lauderdale County State of Alabama on the 21 st day of  May instant to be read as evidence in Compts behalf on the trial of said cause. 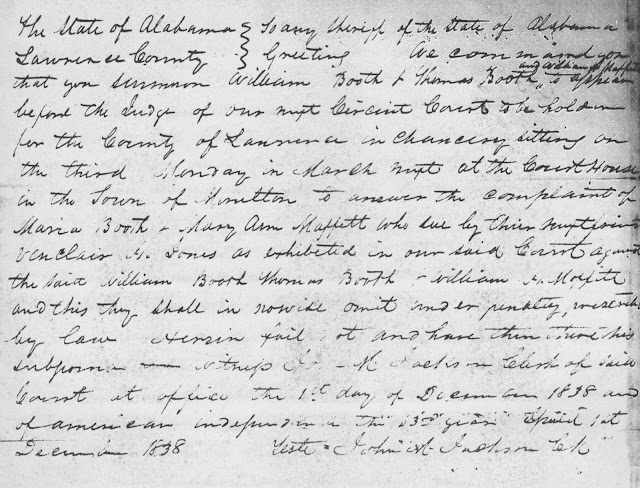 This document will take a considerable amount of time to interpret and decipher. May of the pages are smeared and the handwriting difficult to read. There are juicy details in the middle that give way to the personalities and lifestyles of the Booth family and of Mariah and G. W. in particular. 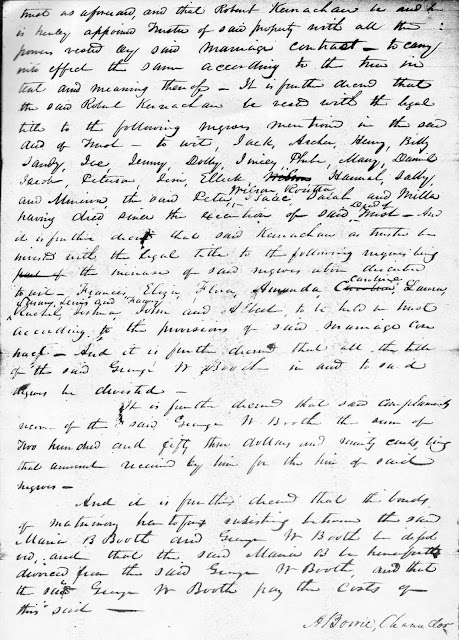 The meat of the entire document can be summed up in its last paragraph, however.


As I had guessed, Mariah and George were divorced, the proceedings beginning only two years after their marriage.

The accusations within and the persons mentioned in the suit were major players in the early history of Alabama, most of them having strong Virginia and Carolina ties, and most of them interelated. My next step is to interpret page by page, to find out  Mariah's accusations against her husband, Dr. George Washington Booth and his brothers and then to the mystery following, Where does she go from here? and What happened to her daughter, Mary Ann Moffet?